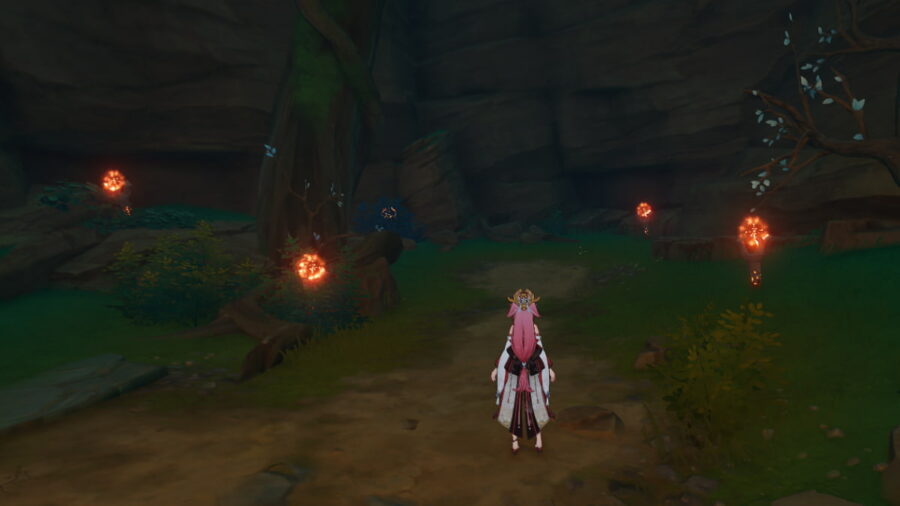 Most of Tsurumi Island's puzzles live in Shirikoro Peak's underground ruin, a small maze-like area that hides remnants of a civilization long gone. The puzzle assortment includes three Torch puzzles that contribute to a Hidden Achievement called Guessing Game. Here's how to find and solve the Torch puzzle located behind the giant dome structure in the underground ruin.

To find the puzzle, head to Shirikoro Peak, glide down, and follow the path leading to the underground ruin. Enter the circular entrance, and you'll find a destroyed dome structure. The Torch puzzle is tucked away right behind it.

There are five Torches positioned parallel to the stars inscribed in the mural on the wall behind them. Each gold-lined star represents a Torch, so all you need to do is light up the Torches in the same positions as those stars.

Reference the image above for the order of Torches to light up. Look closely for Torch #1, as it's hidden behind a bush. While there are five Torches, you only need to light up the three specified above, as the last two will automatically light up at the end. You can use any Pyro applicator, but be careful when using melee characters, as their broad skills might accidentally light up the wrong Torches. Completing this puzzle will reward you with an Exquisite Chest.