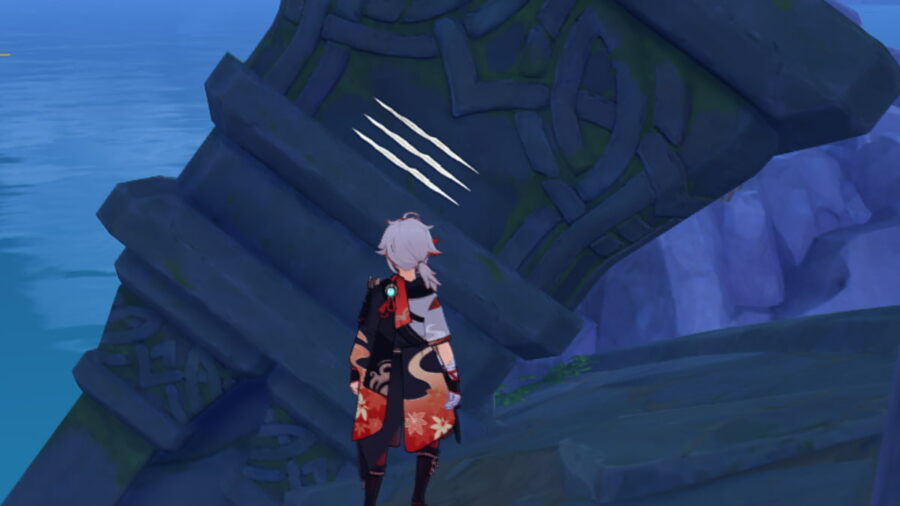 Thus Was the Work Done in Vain is a limited-time World Quest that can only be completed during Genshin Impact's Summertime Odyssey event, which runs from July 15, 2022, to Aug. 24, 2022. In this quest, you and Paimon try to change the fate of an adventurer named Wolfgang by leaving clues in the past in hopes of fanning the flames that motivate him to adventure beyond his limits.

Keep in mind that it's possible to complete this World Quest without initiating it. If you've been exploring the Minacious Isle, there's a chance you've already done some of these puzzles, but this guide will help you piece them together so you can follow Wolfgang's story and get the final reward.

To unlock this World Quest, you first need to complete the Event Quest The Ancient Azure Stars and the Starlight Coalescence constellation puzzle in the Minacious Isle. Consider preparing a Sweet Madame in advance, as you need it at the end of the quest.

Once you're all set, start by using Place in Water to switch to the present version of the Minacious Isle, then head to the area circled in the image below. You can get there by turning on the Anemo Monument below to spawn a wind current to propel you upward, then glide toward the specified location. You will find an Old Notebook with a blue exclamation mark—interact with it to initiate the World Quest.

How to complete Thus Was the Work Done in Vain World Quest in Genshin Impact - All puzzle solutions, Chest & Starlight Coalescence locations

Check the ruins of the past - Pyro torch puzzle

Once that's done, follow the quest marker to the pool of water and use the Place in Water feature to switch to the past version of Minacious Isle. You'll be right in front of a ruin. Enter it and go down the stairs, then enter the chamber with Pyro torches.

Upon entering the chamber, the gate behind you will immediately close, trapping you inside. Assuming that the gate is behind you, apply Pyro onto the torches from right to left. Doing so in this exact order will solve the puzzle. A glowing Investigate spot will appear—interact with it to leave marks on the wall.

Ruins on the ocean surface

After leaving marks on the wall, head back to the present Minacious Isle and follow the quest marker to the location of the Old Notebook. Interact with it to begin the next segment of the quest. The game will ask you to head to the islet west of the Minacious Isle, but no need to use the Waverider.

To get there, head to the area circled in the image below to find a specific pool of water, then use the Place in Water interaction to transport you to the quest location.

Jump down to enter a small room with a locked Common Chest. Your goal is to destroy all six breakable objects in the room within a few seconds. Keep your eyes peeled—there's one above the Common Chest and one at the back of the room.

The vases will keep respawning if you don't break them within the time limit. Once you're done, the Common Chest will unlock for you to loot. Above the Common Chest, there's a hole that you can enter to go further into the ruin.

Enter the hole and turn left to find a locked mechanism beside a vase. Destroy the vase using a Normal Attack. Then jump down and wait for the water level to drop. After it drops, use Elemental Sight to find the breakable boulder and destroy it with Geo Damage or a claymore. The water level will rise again. Look for the vines and climb them to find the locked mechanism again.

A new vase will spawn beside the locked mechanism, so break it again. Then jump back down and the water level will decrease, and then increase once again. This time, the water will increase high enough for you to reach the Common Chest to loot. After looting the Chest, climb the vines and return to the entrance of the cave.

Head back to the entrance of the cave (at the point where you turned left), and this time, turn right and turn on Elemental Sight to find a breakable boulder. Destroy it using Geo Damage or a claymore to open up a path leading further in. As soon as the path opens up, you will find a glowing spot. Investigate it to get a Quest Item called Sea-Salt Crusted Key.

After looting the key, follow the path further in until you enter a room full of Hilichurls. Defeat them all, then interact with the Old Notebook beside a Pyro torch.

Related: How to change the weather to spawn wind currents in the Minacious Isle in Genshin Impact – Summertime Odyssey event

Go to the ruins on the ocean surface

Exit the chamber by retracing your steps all the way back to the first room (where the Pyro torch puzzle was). Apply Anemo onto the four-leaf clover to spawn a wind current to propel you upward, then interact with the Place in Water pool to transport yourself back to the past Minacious Isle.

As soon as you reach the past Minacious Isle, look behind you to find an entrance to a cave. Head inside to find a locked Chest and a time-limited Pyro torch puzzle. Start by using a Geo Damage dealer or claymore user to break the boulder circled in the image above. It will open up a room containing one Pyro torch.

Then proceed with lighting up all four Pyro torches in any order. If you fail to complete the puzzle within a few seconds, the boulder will respawn, and you need to redo it until you succeed. Completing this puzzle will unlock the Exquisite Chest for you to loot.

Open the gate on the ceiling

Next, you will find another locked Chest puzzle in the same room. To solve this, you need to break all seven vases in the room (including the one you looted the Key from) in a few seconds. Doing so will unlock the Chest, mechanism, and the gate leading further into the ruin.

Enter the gate on the left to find the first Starlight Coalescence. It's a floating star that you need to follow into the succeeding room. As soon as you're done leading the first Starlight, head inside the opening marked in the image above to find the second Starlight Coalescence, which you also need to follow. Act fast—if you don't lead both stars fast enough, they will return to their original positions, and you need to try again.

Once both Starlight Coalescences are in the same room, the Chest and mechanism will unlock, and you can capture both stars as well.

Turn left to find an arched entryway leading into a secret chamber. As soon as you step in, the gate behind you will close, trapping you inside. First, use Anemo to get rid of the purple dust. Then turn on Elemental Sight to find the breakable boulder and use a Geo Damage dealer or claymore user to break it, revealing a room with one Pyro torch.

There are four Pyro torches in total. Assuming that the gate is in front of you, light the torches from right to left (the leftmost being the torch inside the small room). You must follow this exact order to solve the puzzle.

After solving the puzzle, two glowing Investigate spots will appear. You must interact with the one outside, circled in the image above. Ignore the one inside the room!

Follow the quest marker out of the ruin and into the pool of water. Place in Water to head back to the small islet west of the Minacious Isle, and keep following the quest marker until you find the Old Notes. Interact with it to read Wolfgang's letter, then exit the ruin and use a Waverider to travel to the islet in the southeast.

Follow the quest marker and climb to the top of the ruin using the invisible bridge (this will not appear if you haven't completed the constellation puzzle mentioned earlier in this guide), then leave a message and a Sweet Madame on the pillar. Once that's done, jump down to the pool of water and Place in Water to return to the islet to the west. Then use a Waverider to get to the southeast isle, where you need to interact with the same etching to complete the World Quest.

Check out our guide on All Chest locations in the Golden Apple Archipelago – Genshin Impact Summertime Odyssey event to find other limited-time Chests on the island.