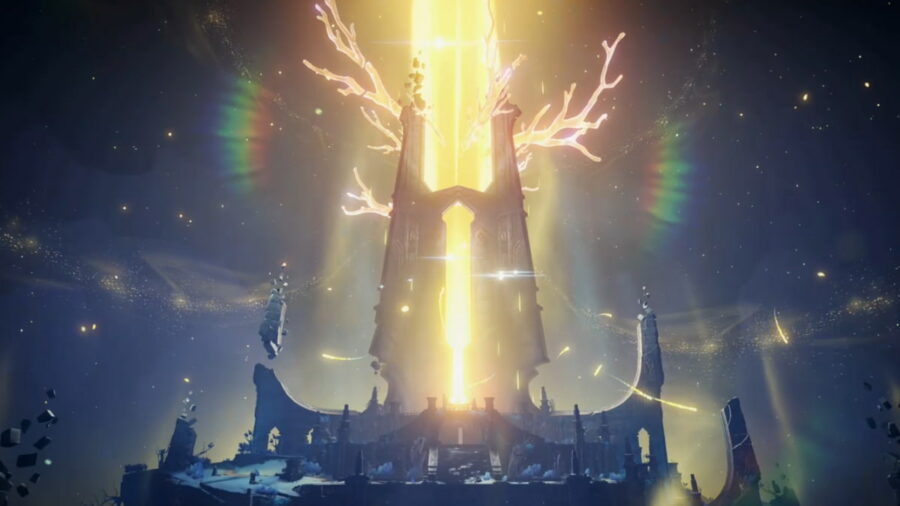 A segment in the last part of the Aphotic Diffusal questline, the Three Realms Gateway Offering: Aftermath, involves using three mechanisms to guide the light while navigating through Illusory Stairways. Here's how to solve the puzzles.

Follow the quest marker to the east of the Three Realms Offering Gateway, where the Evernight Temple would normally be. Then, apply Anemo to the Anemo Monument in front of the statue to prompt a Wind Current to appear, and ride it to lift you to a platform floating in the sky.

Wait for a moving platform to connect with the one you're standing on, step on it, and wait for it to transport you upward. Jump up the makeshift stairs until you land on a platform that can summon an Illusory Stairway.

The glowing part of the platform indicates where the Illusory Stairway is. If you want to shift it to face a different direction, simply activate the Bokuso Box. Each platform can only shift between two directions. Keep in mind that you must not activate the Bokuso Box in the middle of climbing the Stairway, as it will force the latter to disappear—causing you to lose your footing.

Once you step on the platform, climb up the Illusory Stairway to loot a Common Chest. Then walk back to the platform and use the Bokuso Box to shift the Stairway's direction. Climb it to reach another platform with an Enkanomiya Phase Gate. Let it transport you to another Illusory Stairway.

Climb up to loot another Common Chest. Then, head back down and use the Bokuso Box to shift the Stairway, which will lead you toward the mechanism that guides the light. Use the Bokuso Box beside it to complete this part of the quest.

It will connect to a platform with an Illusory Stairway. Use the Bokuso Box to shift its direction, then climb up to loot a Common Chest. Run back down and use the Bokuso Box to revert back to the original direction. Climb the Stairway to reach an Enkanomiya Phase Gate.

Let the Phase Gate propel you to a platform that houses the mechanism that guides the light. Use the Bokuso Box beside it to complete this part of the quest.

Related: What are Shadowy Husks in Genshin Impact – The different types and how to beat them

Follow the quest marker to the location of the Enkanomiya Phase Gate in the west of the Three Realms Offering Gateway, in what would normally be The Serpent's Heart. The Phase Gate will propel you toward a platform. From there, wait for the moving Illusory Platform to arrive, climb on it, then let it move you forward.

Do the same a few more times until you reach a platform that contains an Illusory Stairway. Use the Bokuso Box to shift its direction, allowing you to climb up and loot a Common Chest. Head back down and use the Bokuso Box once again to shift the Stairway back to its original position.

Once you reach the top of the stairs, wait for an Illusory Platform to come to pick you up. It will connect you to yet another platform with an Illusory Stairway. Follow the same pattern as the first: use the Bokuso Box, climb up and loot the Chest, head back down, use the Bokuso Box again, then climb up to your destination.

This time, you'll find an Enkanomiya Phase Gate that will transport you to the mechanism that guides the light. Use the Bokuso Box beside it to complete this part of the quest.

Check out our guide on All Guiding Light puzzle locations in Three Realms Gateway Offering – Genshin Impact to solve puzzles and level up your Bokuso Box.