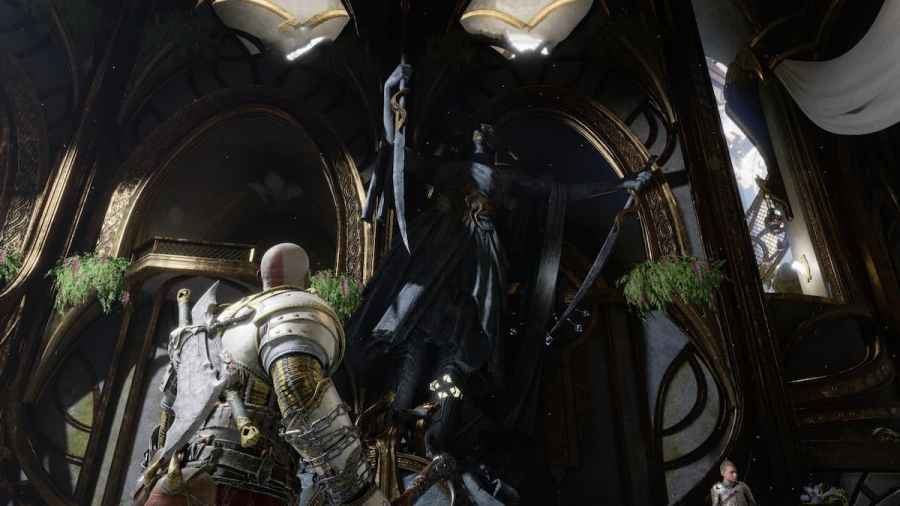 God of War Ragnarok is full of tricky puzzles. While many of these puzzles are optional and revolve around opening chests, some are required for story progression, meaning players may get stuck from time to time.

Players will start in a room with two large statues on either side. The statue on the right should have some green soundstone attached to the base. Once that soundstone is removed, Kratos can use his Blades of Chaos on a grab point and move the statue to the left (see the image below).

Once the statue is moved left, a grabbable ledge should be revealed. Players will need to climb up this ledge, turn right, and then look for a grab point to swing across to another ledge on the opposite side of the room (see picture below for visual instructions).

Once on the other ledge, players should walk down the path until they come to the back of the second statue. This statue will have more soundstone and a Chaos Blade grab point (see image below).

Once players have exposed the Chaos Blade grab point, they should next focus on removing the statue's wings. This can be done by throwing the Leviathan Axe at the designated points on the statue's shoulders. The right-wing should be taken off first, and then the left wing. To remove the left wing, players must pull the statue to the right (see image below) and then bounce the Axe off the Twilight Stone on the statue's shield.

Once the statue's wings are off, players should return to the opposite side of the room (the ledge from step two) and position themselves in front of the Twilight Stone on the statue's shield (see image below). Players can throw the Leviathan Axe from here and open the door to the next area.

Related: Should you pick the Dauntless Shield or Stone Wall Shield in God of War Ragnarok

This puzzle can be extremely tricky at first, but it can be overcome using a guide like this. Players will encounter several other Twilight Stone puzzles, so keep the tactics and mechanics of this puzzle in mind going forward.