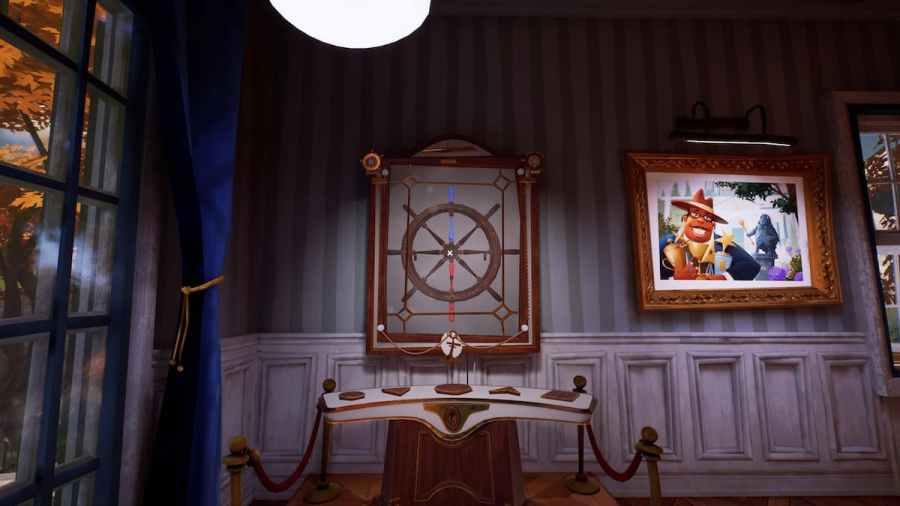 Hello Neighbor 2 is one of the best puzzle games with challenge and obstacles that continue to grow more difficult with each act. As you delve into the Mayor's House, you'll find plenty more puzzles to solve as you attempt to find the museum gear key hidden away in a secret room of the house. To open this secret passageway, you'll need to locate the Mayor's prized trophies and collect a special ship helm. Here's how to complete the necessary steps for Day 4 and continue onward in this twisted tale.

The main goal of Day 4 at the Mayor's House is to collect all five of the trophies to open a display case which holds a special ship helm. This ship helm will act as a key, paired with the star compass pedestal in the Mayor's Room, to open the secret passageway and reveal the missing gear key we need for the museum.

The trophy room is upstairs connected to the Mayor's bedroom by a secret wardrobe passage. If you take a close look at the picture hanging on the wall beside the trophy stand and the ship helm display, you will notice it shows all the trophies that are required. There five of them in total, and for the purpose of this article, we will refer to them all as: Cup Trophy, Circle Trophy, Triangle Trophy, Star Trophy and the Arrow Trophy. Here's how to retrieve all of them.

How to get the Cup Trophy in Hello Neighbor 2

The first trophy we will focus on is the Cup Trophy, since you can get this without venturing up the stairs and you'll find the most important aspect to this puzzle right as you enter the property: the large marble statue. The statue holds the Cup Trophy, but to retrieve it, you'll need to find the statues missing piece.

The piece is a staff which is just a few feet away buried in the ground. However, to dig it up, you need to distract the Mayor's dog. Otherwise, the dog will bark at you and cause the Mayor to come out to investigate. Much like the cat at the bakery, all you need to do is find him some food. Conventiently the Mayor has some steak on the grill, but you won't be able to grab it until the fire is out.

To put the fire out, you will need an extinguisher. There is one hanging right in the Mayor's kitchen on the left side of the sofa. Bring it out onto the deck while the Mayor is distracted playing the piano and put the fire out long enough to grab the steak.

Then sneak up behind the dirt mound and find the dog's empty dish. Once you place it in the dish, the dog will no longer bark at you. You can now dig up the staff by using your shovel. If you don't have one on hand, you can find one leaning against the marble statue at the entrance to the property.

Bring the staff back to the marble statue and place it in the statue's hand. This will automatically open the front compartment where the Cup Trophy is hidden. Now you can venture upstairs to place them down on the trophy stand before the Mayor catches you with it.

How to get the Star Trophy in Hello Neighbor 2

While you're upstairs, you will want to explore the various rooms up there, including the Mayor's office. In the office sits another trophy, but it is guarded by lasers and unreachable. You will need to find a way to power off the lasers to grab it. Notice there is a wire trailing up the wall and to the ceiling, revealing where the power might be connected. To get up there, you will need to climb to the roof.

Head over to the greenhouse room where there is a white ladder leading up to the roof. Here you can walk onto the roof and around to the left until you find a double white-shutter door, which leads into the attic. In here is where you will find the fuse box connected to the office.

You will need to pry off the board covering the fuse box with your crowbar. If you don't have one, you can find another hanging on a plank further in the attic. Then, open the fuse box and take out the fuse. This will power down the lasers. You'll want to keep the fuse for later, so don't accidentally drop it.

Head back to the office by quickly crawling through the vent directly to the right of the fuse box. You'll find the lasers off and you can now grab the Star Trophy and add it to the trophy stand.

Related: How to get the heart key for the museum in Hello Neighbor 2

How to get the Arrow Trophy in Hello Neighbor 2

You can head back downstairs to get the next trophy, which is the Arrow Trophy. This trophy is locked inside a gated room underneath the staircase. The red light bulb beside it symbolizes that won't open, but also notice the music sheet below it as well.

This music sheet has a code on it that will open the gate and allow you to enter the music room. There are four pins on the sheet in four different colors. You'll need to match up the colors on the sheet to the keys on the piano to figure it out.

Wait until the Mayor is wandering upstairs or out on the porch. You'll have to be quick before he hears the piano being played. Play the keys that match the order of the colored pins on the sheet. It should be like this: yellow, red, green, and blue. The light should turn green and the gate will automatically open.

You can now venture into the music room where you will find a record player. If you flip the red switch on the record player it will turn on. However, it will make an awful noise since there is no record on it. You'll need to find a record, which is conveniently hanging in a display right at the top of the stairs in the hallway outside of the office. You can smash through the glass with your crowbar or any items you have on hand and grab the record.

Place the record on the record player and flip the red switch once more. This will create a whole disco party to light up the room and begin lowering the ceiling passageway to an upper attic space. You will need to act quick here. This music is very loud and will immediately draw the Mayor in to shut it off and close the passageway. As soon as the ceiling lowers, grab the ledge and climb up.

Once you're up in the attic space you will immediately see the Arrow Trophy there for you to grab. You can then climb out the vent grate, jump down to the bathroom, and make your way back upstairs to the trophy room to place it with the others.

Related: Where to find all the model houses in the museum in Hello Neighbor 2

How to get the Circle Trophy in Hello Neighbor 2

The Circle Trophy is perhaps the easiest of all the trophies and that's because it's already out in the open ready to grab. All you have to do to grab it is practice a little parkour.

The Circle Trophy is stuck up on the beams hanging in the Mayor's bedroom. To reach them you'll have to hop on the Mayor's bed several times until you are high enough to jump up, reach the ledge of the beams, and climb up. Once you're up there you can easily grab the trophy and prepare to get the last one as well.

How to get the Triangle Trophy in Hello Neighbor 2

You will also notice another fuse box located in the beams of the Mayor's bedroom. This fuse box is connected to the lit sail boat painting directly below. Powering this fuse box will move the painting and reveal a safe.

You'll need the fuse that you took out of the other attic fuse box. If you don't still have it in your inventory, you can head back to the same attic space by climbing onto the roof from the greenhouse. Place the fuse into the fusebox and the light will turn green and move the painting to the side so you can interact with the safe.

The safe requires a four digit code, but to find it you'll have to complete another small activity. If you hadn't noticed before, there is a matching sail boat painting downstairs in the dining room. This painting also has a wire to a mechanism on the stand below it. What you'll need to do is head to the downstairs bathroom and grab the sail boat from the bathtub.

Once you have the sail boat, head over to the dining room painting and place it on the mechanism below. This will activate the power and lift up the painting to reveal a polaroid of the Mayor's dog with a birthdate on it. All you need are the bolded numbers, which are: 8-6-9-1.

Head back to the safe and type in this code to open it up. Inside is the last trophy you need to place on the trophy stand.

Now that you have all the trophies, place them on their correct spots on the stand. Once they are all set, the display case above it will open and allow you to grab the ship helm. With the ship helm in your possession, you can now work towards opening the secret passageway in the Mayor's bedroom.

Place the helm on the star-shaped compass pedestal. You'll notice they both have the colors blue and red on them. Interacting with the wheel will spin it continuously until you press it again to stop it. To open the passageway, you will need to line up the colors on the compass with the colors on the helm: the blue peg with the blue point and the red peg with red point. When it's stopped on the correct alignment, the passageway will automatically open.

You can enter the passageway where you will find the gear key on the desk. Picking it up will activate the final act of the story, Night 4, where you will need to finish the rest of the museum puzzles and get to the bottom of the Neighbor's shenanigans.

How to complete Day 4 puzzles in Hello Neighbor 2