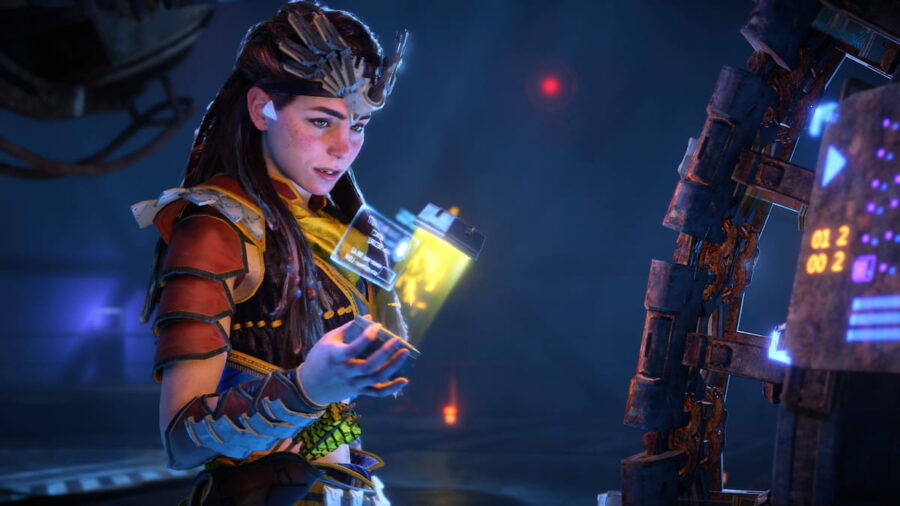 From the outer entrance of Latopolis to the furthest inner sanctum and back out. Latopolis is one of the more difficult dungeons to traverse in Horizon: Forbidden West as it is fairly flooded and destroyed on the inside. After breaking into the front entrance by igniting the Firegleam with an igniter, there is still much for players to do.

How to reach the Inner Gene-Locked Hatch

After igniting the Firegleam on the front door, Aloy should come to a hall and office at the front. The office can be reached by heading into the next room and has a datapoint inside. In this first flooded room, head off to the left from the middle platform. From here, jump up into the vent to reach the other side of the room.

From beyond the door, take a sharp left and grab the energy cell. Place this in the terminal of the second doorway to give it power. In the next room, use the pullcaster to reach the platform above and enter the room off to the right. Simply push the crate inward to go inside.

Once the crate has fallen into this next room, move it towards another platform above and jump up to ignite another bloom of Firegleam on the wall to the right. Grab the energy cell from the previous terminal through this new hole in the wall and bring it down back into the newest room found. Place the energy cell in the terminal to power this area and grab a holographic datapoint.

Through the next doorway, take the ladder on the left and begin climbing and gliding from one side of the room to another. Ignite more Firegleam over on the opposite side. In the room off to the right, players can find a datapoint with the access code for the door on the left. Open this door and pry open the next door on the right into an elevator shaft. Climb up the ladder and what's available to enter the level above.

Follow the hall at the top until it opens up to the large flooded room again. Use a mixture of jumping, climbing, pullcasting, and gliding to reach the main hatch. Many of the jumps feel like Aloy won't make it, or just barely will. If she doesn't, be sure to throw down ladders on the nearest platform beforehand so she can climb back up to the nearest area to her.

Related: Where to find hidden audio datapoint in Latopolis in Horizon Forbidden West

How to Find GAIA Backup

The arm that holds GAIA's repositories on the right will become stuck. Shoot the orange part of the arm where it bends to release the repositories. Once it drops down, activate it to start a cutscene and look for a GAIA backup.

Related: How to unlock the Ancient Trunk in Latopolis in Horizon Forbidden West?

How to Defeat the Mysterious Attacker

After the cutscene, Aloy has to face off against one of the Mysterious Strangers. She is underequipped as they have incredibly advanced technology by comparison. Due to this, Aloy's weapons will do no damage to the Mysterious Attacker. However, after hitting him once, Aloy will realize this and think of another solution.

Head over to the right console on the floor and activate it. Be careful to avoid his large AOE attacks. After the console has been activated, Aloy will need to shoot all of the orange arm couplings on the RECLUSE SPIDER. This can take a while between dodging, depending on the arrow type.

Once all of the couplings have been broken, the top cable of the RECLUSE SPIDER will pop open to reveal the blue and orange cables within. Shoot all of these in order to escape from the Mysterious Attacker. Once this is done, players will need to navigate underwater and away from the Specters until they can find an alternative exit.

How to complete Latopolis in Horizon Forbidden West?