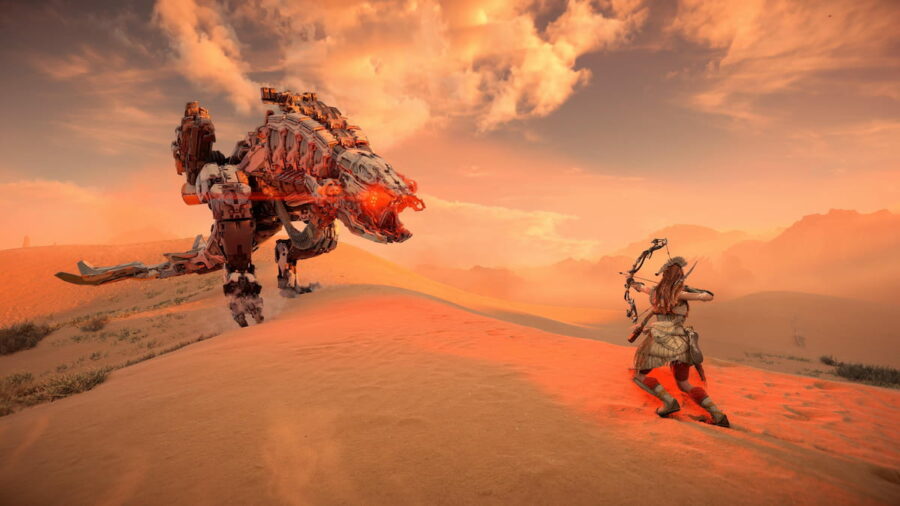 In Horizon Forbidden West, Thunderjaws will employ a range of accurate and devastating weapons against Aloy and can be a real pain to defeat. The best way to tackle a Thunderjaw is to remove its ability to attack. You can do this by shooting and removing its Tail (prevents Tail-based attacks), Disc Launcher (stops one of its long-ranged attacks), or Rapidfire Cannon (also stops one of its long-ranged attacks). Removing these body parts and dodging and avoiding the machine's melee attacks will ensure a quick victory for Aloy against the Thunderjaw.

Players can attack machines with different kinds of elemental attacks. Elemental attacks in the game include Fire, Shock, Frost, Plasma, Purgewater, and Acid. Thunderjaws will be weak to damage from Purgewater and Acid attacks. They will also be strong against damage from Shock and Frost attacks.

Machines in Horizon Forbidden West will drop different loot items, with many being specific to each kind of machine. Some can be looted from a fallen machine, while others will need to be removed (shot off with an arrow or removes with a hit from the spear) while the machine is still alive. The Thunderjaw will drop a long list of loot items:

*Loot items marked with an asterisk are exclusively dropped from the Thunderjaw machine.

How to defeat Thunderjaws in Horizon Forbidden West?