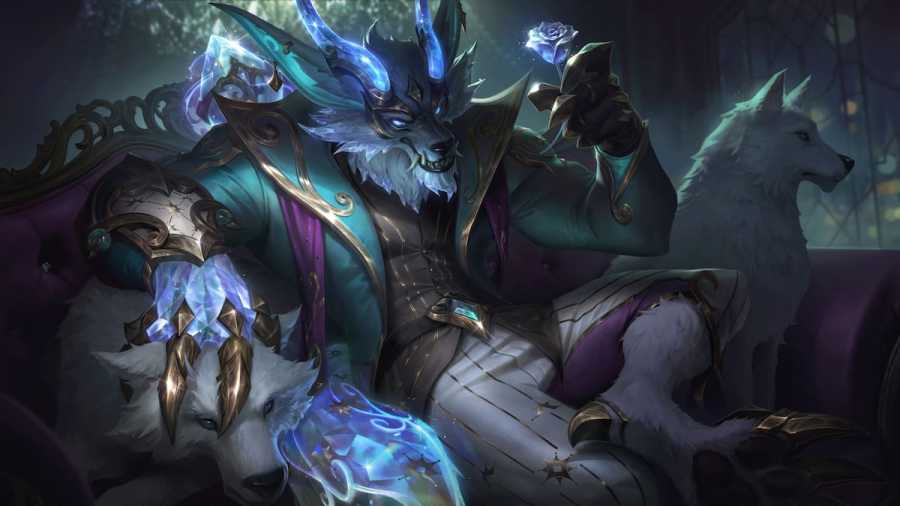 League of Legends has a history of releasing gorgeous winter-themed skins, and the Winterblessed skin line does not disappoint. With lovely shades of blue and magenta, these splash arts pair perfectly with the in-game visual effects. The legendary Diana skin, in particular, is one of the most beautiful winter skins we've seen thus far. Here are all the new Winterblessed skins coming to League of Legends.

All Winterblessed skins in League of Legends

It is difficult to find a skin that possesses both exquisite splash art and visual effects. Winterblessed Diana, however, is that skin. The in-game effects propel blue and purple across the canvas of Summoner's Rift, encompassing the wonder of snowfall. This is exactly what we want from a legendary skin, and we can't help but look forward to future releases.

Where Nutcracko fell short, Winterblessed Shaco fills in the gaps. This skin imbues Shaco with playful colors while keeping his menacing grin. At first glance, he seems fun and inviting, but as you look more closely, he is scarier by the second. While Winterblessed Shaco doesn't reinvent the wheel, it polishes it, using crisp splash art to contextualize its subject.

Related: All new Halloween skins in League of Legends (November 2022)

This splash art is simply gorgeous. This skin leans into Swain's identity as a royal individual, painting his cloak with colors and golden accents. His arm bears a bit of the cosmos, shifting away from the blatant corruption of previous skins. The visual effects of this skin look surprisingly sleek for an epic skin.

The long-awaited cosmetic finally arrives, as Zilean fans rejoice all over the world. Winterblessed Zilean brings out the best aspects of his character, including his sage-like status and control over the tempo of the earth itself. This skin portrays Zilean as less of a legacy champion, and more of a reborn master of time.

While this skin has received some backlash for Zoe's odd proportions, there is no denying that the splash art is simply beautiful. Winterblessed Zoe puts her childlike whimsy on display, while also demonstrating a kind deed. The wolves are also drawn masterfully, and the frigid fog adds to the art's ambience.

Related: Should you reroll into random skin permanent in League of Legends?

Winterblessed Warwick is one of the unsung beauties of the skin line, seeming simple at first glance but revealing hidden intricacies upon a closer look. The array of colors dancing in the sky behind Warwick may seem unfitting for his villainous character, but it actually provides a sense of continuity for the skin line. Winterblessed Warwick exists in the same joyful world of the other skins, with vivid hues and flurries of snow, and this splash art recognizes that. However, Warwick seeks to destroy this joy, rather than revel in it.

This skin came as a total surprise to the League of Legends community. Prestige Winterblessed Warwick is a sophisticated skin that is deemed by several fans to be unreasonably attractive. In the splash art, Warwick cradles a crystalline rose, accompanied by two snow-white dogs. This skin is likely to play into the Winterblessed skin line's lore, perhaps revealing Warwick's role as a villain in the story.

All new Winterblessed skins coming to League of Legends