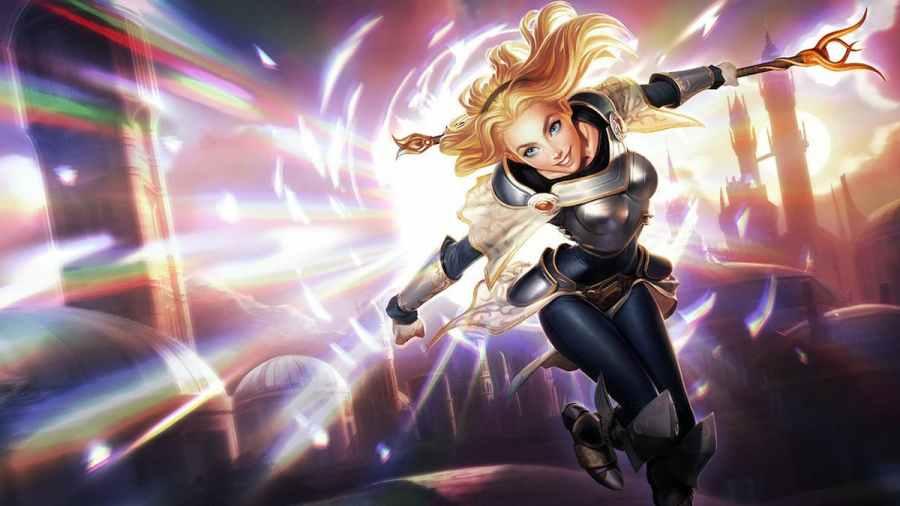 Lux is a mage champion beloved by the League of Legends community. She is an optimistic character who uses rays of light to attack her opponents. As the poster child of League of Legends, she often receives intricately designed skins, portraying her as a cosmic deity and a member of magical academia. Here are all Lux skins, ranked from worst to best.

All Lux skins in League of Legends, ranked from worst to best

Commando Lux takes the concept of a light mage, and places it in a situation that is difficult to justify. While the idea of a magical staff being transformed into a flamethrower is comedic for a moment, creating a skin around the idea causes it to overstay its welcome. As a character, Lux's cheerful, bubbly personality simply doesn't mesh with the hardened soldier trope.

Despite the aged splash art, Sorceress Lux still portrays a compelling design. This skin exchanges Lux's modern armor for traditional magical robes, telling an ancient tale of a forgotten time. Sorceress Lux reflects upon the public perception of magic, illustrating how most people expect Lux to look. In doing so, Sorceress Lux provides a fascinating take on how the design of witches has modernized, leaving the iconic witch hat and broomstick behind.

Imperial Lux reveals her royal heritage, painting her as a military leader of the Crownguard family. This skin depicts Lux in an outfit that does not reflect her free-spirited nature, although this is a brilliant decision. Perhaps Imperial Lux represents her family's expectations for her future, anointing her as a strict ruler of Demacia. However, Lux is a kind and compassionate character, which is hardly befitting for this position, but perhaps that is the point.

Steel Legion Lux depicts her as an industrial worker, who forged her weapon with steel and crystal rods. This skin takes a scientific approach to Lux's magic, describing her weapon as a "light-magnifying crystal rod" that fires "rays of concentrated energy." This is a refreshing idea, especially when most of her skins do not experiment with the justification for her magic.

Although Spellthief Lux has a beautiful piece of splash art, the in-game model leaves much to be desired. However, the concept of a rogue mage sneaking around a school to steal powerful magic is top tier. This skin questions Lux's true motives, revealing a mischievous side to the morally upright mage.

Related: Who is Thresh in League of Legends lore?

Although this skin is lovely, it fails to create a nuanced concept. Compared to the base Porcelain Lux skin, the Prestige version simply changes the color scheme and a few small details. While the white and blue color palette of Porcelain Lux is easily recognizable as the color of fine china, the gold and purple palette of the Prestige skin lacks a real-world comparison. It is gold and purple for the sole reason of being gold and purple. For this reason, it actually hinders the Porcelain theme and loses its identity, rather than enhancing the skin line.

Porcelain Lux sports a compelling color palette, portraying her as a leader of the Protectors, who possesses the magical Rabbit Relic. The rabbit symbolism does fit Lux and her personality, but this skin still feels shallow. Porcelain Lux feels as if it lacks a greater purpose in the world of Runeterra, and only serves to supplement the world of the Porcelain skin line.

Battle Academia Lux portrays a young, enthusiastic freshman on her way to class. Her handbag is riddled with buttons of various champions, and she bears an excited smile on her face. This skin represents the model freshman, with a love for learning and hope for the years to come. Lux is also an excellent fit for this skin line, as she is a young mage with a bubbly personality and infectious happiness.

Star Guardian Lux paints her in bright pink, likening her to a magical girl. Although this bold color scheme may not work for other champions, it suits Lux. In lore, Star Guardian Lux is a captain of the team, inspiring others to work hard and never give up. She is the heart behind the Star Guardian team, and even though she is inexperienced, she makes an effort to improve her skills each day.

Prestige Battle Academia Lux depicts her as a sophomore who has become comfortable in her school environment. As it is a Prestige skin, Lux has a new hairstyle and gold accents on both her outfit and weapon. This version of Battle Academia Lux is rooted in the world of the skin line, feeling believable and relatable.

This skin shows a somber side of Lux that has not been revealed previously. She is intent on keeping the cosmos in line and certifying that each star is in its proper place. As the skin's description reads, Lux "brings order to a universe drifting towards entropy." It is refreshing to see Lux portrayed in a more serious manner, highlighting the responsibility that comes with power.

Dark Cosmic Lux demonstrates the sinister side of her character, showing her shattering a planet into pieces. While this skin is similar to Cosmic Lux, it is still visually unique, with a palette of deep purple and pink. In lore, Dark Cosmic Lux rebels against her Queen, manipulating the universe for her own personal gain. This skin reveals that malice and corruption perfectly, with sharp edges and a maniacal smile.

In this skin, Lux is a guardian of the immortal realm, protecting the world from darkness. She commands her fellow demigods, leading the charge with her staff. Lunar Empress Lux draws influence from traditional folklore, paying homage to Lunar New Year with small design details. The concept of Lux as a young ruler in the presence of giants is compelling, and executed quite well.

Elementalist Lux is an Ultimate skin with ten different forms, which can be activated throughout the game. The combination of her forms resembles alchemy, as assembling both Fire and Nature creates Magma. This skin is interactive and incredibly unique, as each form possesses its own voice lines and visual effects. With an array of options and designs to pick from, Elementalist Lux is the best Lux skin.

All Lux skins in League of Legends, ranked