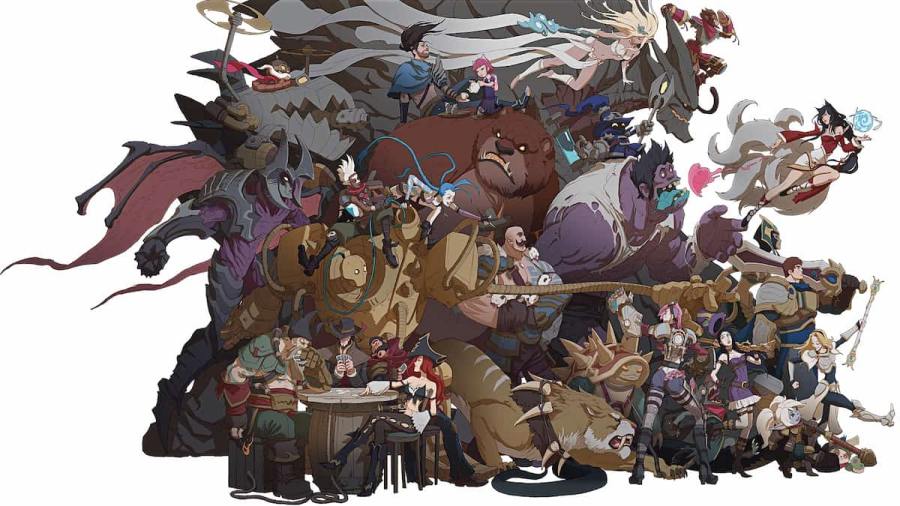 When selecting a champion in League of Legends, it's normal to feel overwhelmed, especially as a new player. The game is known for its expansive roster, filled with characters of all shapes, sizes, and abilities. It's difficult to tell whether you should play a champion based on their appearance or playstyle, but we're here to help. Here are the best champions for beginners in League of Legends.

Garen is a delightfully simple character to play top lane. You must run toward the enemy without fear and swing your sword at them when you play Garen. He is a melee champion who purchases items that increase his Armor and Attack Damage. Regarding abilities, Garen is all about making opportunities to swing his sword.

His passive regenerates health when he is out of combat, so he can continue wielding his sword soon. His Q grants him movement speed and enhances his next attack with his sword. Garen's W increases his Armor and Magic Resist to avoid being injured by his opponent's sword. His E causes him to spin with his sword, and finally, his R prompts him to plunge his sword and execute an enemy. There truly is no simpler champion than Garen, making him an excellent pick for beginners.

Nasus is an easy character to learn, but he can be deadly in the late game. Nasus is all about scaling, as his Siphoning Strike infinitely gains more damage each time he kills an enemy. This means that Nasus becomes more powerful each minute as long as he uses Siphoning Strike effectively. Nasus is a melee fighter who builds Armor and Health items.

Nasus' abilities are simple yet lethal. His passive grants him Life Steal, which heals him whenever he attacks an enemy. His Q is Siphoning Strike, which inflicts extra damage for each enemy you slay. His W gradually slows an enemy and decreases their Attack Speed, making opponents easier to chase. His E deals damage in a circular area, reducing the Armor of any enemies in its radius. Finally, his R temporarily increases his Health, Attack Range, Armor, and Magic Resistance, as well as damaging any enemies in the area. This ability also reduces the cooldown of his Q, Siphoning Strike.

Related: How to complete ‘Embrace the Foreglow and Silence the voices’ in League of Legends

Nunu & Willump is a great starter jungler, due to their sustained potential. This duo's abilities equip players to kill jungle monsters and ganking lanes. With Nunu & Willump's healing, they can also stay in the jungle longer without recalling. Nunu & Willump is a melee tank who builds Health and Armor items.

Nunu & Willump's abilities provide impressive mobility, helping newer players properly position themselves on the map. Their passive increases the Attack Speed and Move Speed of both Willump and a nearby ally. Additionally, the passive cause Willump's basic attacks to strike nearby enemies. Their Q bites an enemy, dealing damage and healing themselves.

Their W creates a snowball that increases in size and speed as they roll it. Once the snowball lands on an opponent, it knocks them up and inflicts damage. Their E throws ranged snowballs that slow enemies, and after a while, Willump roots any champions that were hit with a snowball. Finally, their R charges up a circular damage area and slows enemies. After charging up, the ability bursts and inflicts massive damage.

Master Yi is an excellent jungler for beginners due to his high damage and teamfight potential. He is skilled at chasing down enemies and evading death. With his self-healing, Master Yi can stay in the fight for long periods, making him an ever-present threat in the jungle. Master Yi is a melee assassin who builds Attack Speed and Life Steal items.

Master Yi's abilities are versatile, enhancing his jungling efficiency and teamfight damage. His passive causes him to strike twice every few attacks. His Q makes him untargetable, teleporting him between enemies and dealing damage. His W heals himself and causes him to take reduced damage. Master Yi's E grants bonus true damage on his basic attacks. Lastly, his R increases his Move Speed and Attack Speed, making him immune to slowing effects for some time.

Annie is a mid laner that isn't too challenging but still packs a punch in fights. Her passive allows her to frequently stun the enemy, creating opportunities to defeat opponents. Her shielding capabilities are helpful when running away from enemies since they grant Move Speed. Annie is a ranged mage who builds Ability Power and burn damage items.

Annie's passive causes every fourth ability to stun her opponent. Her Q launches a fireball at the enemy, refunding its Mana cost if it kills the target. Her W emits a cone of fire that is especially powerful when paired with her passive's stun. Her E grants herself or an ally a shield, which increases their Move Speed. This shield also damages any enemies who strike them with basic attacks. Her R summons her bear Tibbers, who will chase and attack opponents. He also burns any opponents in the vicinity.

Ahri is a mid laner with impressive mobility and crowd control. She can skillfully dash around the battlefield, rushing out of danger if needed. With enough items and proficiency, Ahri can carry her team to victory. Ahri is a ranged mage who builds Ability Power and Magic Penetration items.

Ahri's passive grants her healing every time she kills nine monsters or more minions. If she slays a champion, she receives increased healing. Her Q sends out an orb that she pulls back, dealing damage both times. Ahri's W grants her Move Speed and launches three projectiles that lock onto nearby enemies. Her E throws a heart projectile that charms an enemy upon contact, incapacitating them and forcing them to walk toward her. Finally, Ahri's R causes her to dash and fire a damaging bolt. This ability can be cast three times and gains an additional cast on an enemy takedown.

Related: Who is Ahri in League of Legends lore?

Miss Fortune is an ADC that inflicts massive damage with her abilities. She barrages the enemy with projectiles, slowing them down and securing champion kills. Miss Fortune becomes a terrifying threat in the late game if she can claim enough gold early on. Miss Fortune is a ranged marksman who builds Attack Damage and Critical Strike Chance items.

Miss Fortune's passive causes her to deal bonus physical damage when she strikes a new target using basic attacks. Her Q fires a bouncing projectile at an enemy, also dealing damage to an enemy behind them. Her W grants her Attack Speed and passively gives her Move Speed when she is out of combat. Her E inflicts damage over time in a circular region, slowing enemies. Her R fires constant projectiles in a cone, dealing massive damage to opponents in the vicinity.

Sivir is an ADC with an impressive amount of range. Using her boomerang-esque attacks, she can pick off low-health enemies from a distance. She also provides utility to the rest of her team, with a Move Speed boost as her ultimate ability. Sivir is a ranged marksman who builds Critical Strike Chance and Attack Speed items.

Sivir's passive grants her a burst of Move Speed when she attacks an enemy champion. Her Q flings her blade like a boomerang, returning it to her hand after dealing damage both ways. Her W gives her next three attacks Attack Speed, allowing them to bounce to separate targets at the cost of reduced damage. Her E creates a shield on herself, blocking the next enemy's ability. She receives Health and temporary Move Speed if the shield successfully blocks it. Her R grants allies a burst of Move Speed while reducing her ability cooldowns after each basic attack.

Lux is a support champion with high amounts of damage and crowd control. With her abilities, she can stop enemies in their tracks and help secure kills for the ADC. Her R is also on an incredibly short cooldown and inflicts a surprising amount of damage. Lux is a ranged mage who builds Ability Power and support items.

Lux's passive applies energy on the target when they are hit by one of her spells. She deals extra damage when she uses a basic attack on that target. Her Q immobilizes two opponents in its path, dealing damage. Her W launches her wand, granting a shield to any ally it touches. Her E fires a circle of damage, slows enemies, and can be detonated for extra damage. Her R shoots a massive laser, which damages all enemies in a straight line after a short delay.

Nami is a support champion who heals and empowers allies. She is excellent at controlling the battlefield, stunning enemies who seek to harm her allies. Although she is a support, she can also inflict damage with her healing ability and bubble ability. Nami is a ranged mage who builds support and anti-healing items.

Nami's passive causes her abilities to increase the Move Speed of allies, but only if they hit her allies. Her Q launches a bubble at a designated area, stunning enemies and dealing damage. Her W emits a stream of water that bounces between allies and enemies, healing allies and damaging enemies. Her E temporarily empowers an ally, increasing their magic damage and causing their attacks to slow the target. Nami's R creates a tidal wave that knocks up, slows, and damages opponents. If this wave hits allies, it increases their Move Speed.

Best champions for beginners in League of Legends