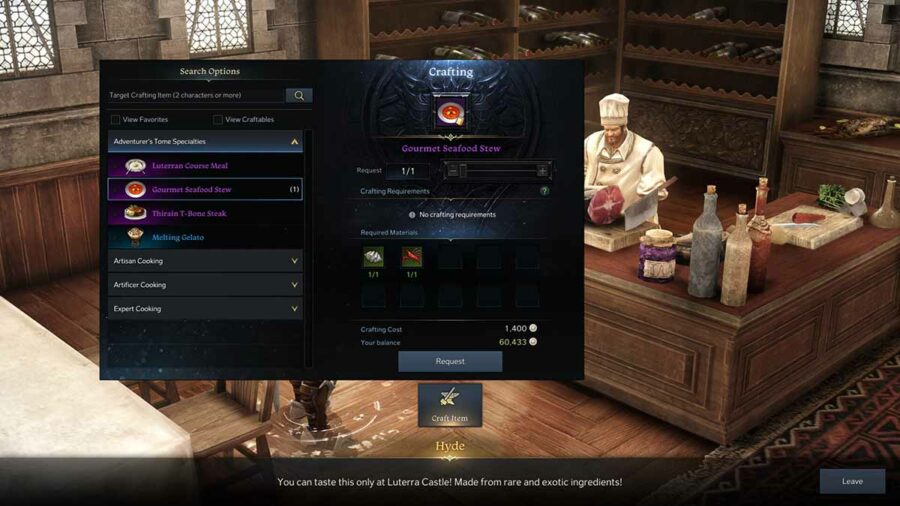 The Gourmet Seafood Stew is a dish prepared by Chef Hyde at the Luterra Castle. The recipe calls for 1 Rock Cave Shrimp, 1 Rock Cave Shellfish, and 1,400 Silver. Players need to have reached East Luterra before finding the ingredients and speaking to Chef Hyde.

Where to find ingredients for Gourmet Seafood Stew

The ingredients are all at Croconys Seashore. Croconys Seashore is the last map before leaving East Luterra, so it's a long walk if you haven't saved the Waystone there yet. Both ingredients are located in the Rock Cave in the center of the map. If you haven't been there, the map won't show it, so head east of the Guard Encampment, toward the arrow on the right side of the map.

The first ingredient, Rock Cave Shrimp, can be found at the beginning of the cave, in the waterfall. Below is a picture of the location on a map, along with a screenshot:

Just past the cave is the second ingredient, Rock Cave Shellfish. As you leave the cave, there will be another waterfall. Investigate the rocks near the opening. Below is a map and screenshot showing the location.

Related: How to get all East Luterra Cooking Collectibles in Lost Ark

Where to find Chef Hyde

Chef Hyde can be found by returning to Luterra Castle and heading southwest. The restaurant entrance will be located next to all of the NPCs selling food in the southwest corner. Look for a door that has light coming from the inside. Chef Hyde will be behind a counter in the corner.

Click on Chef Hyde. In the Adventurer's Tome Specialties tab, you'll find Gourmet Seafood Stew. Even though you have both ingredients, he'll still charge 1,400 Silver, so be ready for that.

For more Lost Ark guides, check out Lost Ark – How to change the AFK timer or What is Crystalline Aura in Lost Ark? right here on Pro Game Guides.

How to craft Gourmet Seafood Stew in Lost Ark