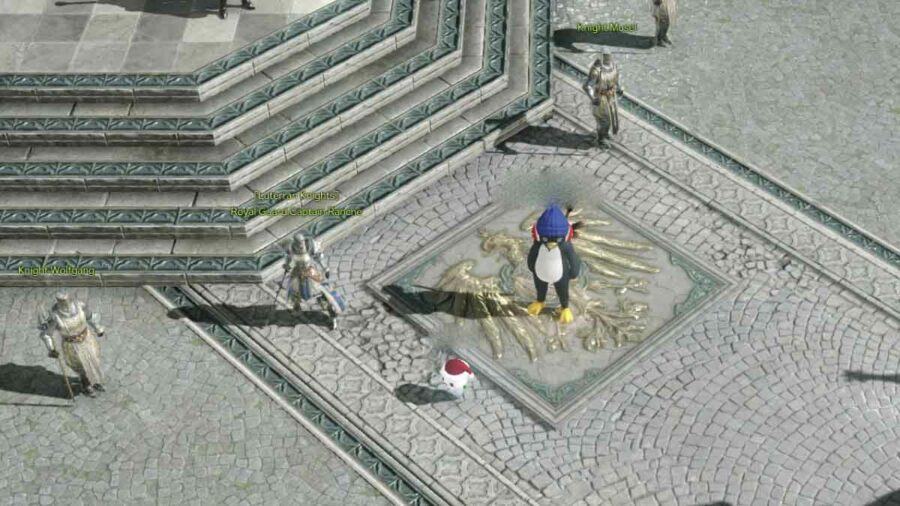 You can find Cooking Collectibles in every region of Lost Ark. The process of finding or crafting each one can be difficult if you don't know what to do. Luckily, we have assembled all of the cooking collectibles for the East Luterra continent below. While many of these require multiple steps, some only need to be purchased.

Below you will find each Cooking Collectible in the Adventurer's Tome of East Luterra. For a more detailed explanation of any collectibles listed below, click on its name to go to its dedicated page.

Go to the Luterra Castle area and then to Luterra Palace to find Dusty Rainbow Candy. Take the northeast route to the Arena and stop when you see the squires playing as an alternative to going inside. Head north toward the Jousting Area until you see some benches. You can find the location on the map above.

In the shade, a brown cloth bag is lying on the ground. You'll find a Dirty Rainbow Candy if you Investigate the bag on the floor. Add this collectible to your Adventurer's Tome by right-clicking it in your Inventory.

Go to the most southwest corner of the Luterra Castle area. There will be stalls and merchants selling a range of goods in a small area. The location is shown on the map above. When you're there, stop by Food Merchant Patrick. Although he blends in, he stands next to the only stall with a canopy.

Right-click on Food Merchant Patrick to view his wares. It won't automatically appear. Instead, you need to look under the Buy Tab for Cooking and Ingredients. Click Ingredients to view the Foundation Centennial Wine.

The wine costs 8,000 Silver, which is more than most of the ingredients and dishes sold in the area. You can add this collectible to your Adventurer's Tome by right-clicking it in your Inventory.

Related: All Vista locations in East Luterra in Lost Ark

Because the ingredients are close to Chef Hyde, preparing the Luterran Course Meal is relatively easy. Just head to the southwest corner of Luterra Castle. There will be many food vendors on that corner, so locate the two that sell ingredients. You can find the exact location on the map above.

Go to Albaro, the first vendor, who sells Sirloin for 1,500 Silver. Albaro is located near the largest stall with all the vegetables. Then go to the second vendor Enoch. Enoch sells Luterran Courtesies for 4,000 Silver. The stall next to him has noticeably fewer vegetables.

Chef Hyde's restaurant is located just to the right of Enoch, just look for the open door.

Click on Chef Hyde to view his wares. In the Adventurer's Tome Specialties tab, you'll find the Lutteran Course Meal. Despite having both ingredients, he will still charge 900 Silver, so be prepared for that.

All ingredients are available at Croconys Seashore area. Croconys Seashore is the last map before leaving East Luterra, so it'll be a long walk if you haven't saved your Waystone there yet. Both ingredients are located in the Rock Cave in the center of the map. The map won't show it if you haven't been there, so head east of the Guard Encampment, toward the arrow on the right side of the map.

Chef Hyde can be found by returning to Luterra Castle and heading to the southwest corner of the map. You'll find the entrance to the restaurant next to all of the NPCs that sell food. You'll see a door with light coming from inside. Chef Hyde is behind a counter in the corner.

Click on Chef Hyde and go to the Adventurer's Tome Specialties tab to find Gourmet Seafood Stew. Despite having both ingredients, he will still charge 1,400 Silver, so be prepared.

You'll need to buy Dry-aged Meat from Wandering Merchant Morris, who will sell it for different prices each time, but it usually costs around 800 Silver. Below are the times you can find him, but this is based on the time listed on your server, not your local time. All times are for both AM and PM:

He will appear in one of three areas, so move on to the next if you don't see him in one. Dyorika Plain, Sunbright Hill, and Flowering Orchard are the three map locations listed below:

Return to Luterra Castle and head to the southwest corner to find Chef Hyde. NPCs selling food will be located next to the restaurant entrance. Look for a door with a light on the inside.

Go to the most southwest corner of the map in the Luterra Castle area. You will find Cooking Ingredient Merchant Enoch there. He is standing next to a vegetable stand on the grass.

This is likely to fail a lot, so you'll have to keep buying Bread Crumbs. If you fail anywhere in the process, you will get Spoiled Dough which is entirely worthless and cannot be traded.

To find the Gelato

Go to the Tavern in Wavestrand Port. You can buy a Gelato from Peugo for 30,000 Silver.

Burt sells Hot Chocolate Coffee for different prices each time, but it usually costs around 8,000 Silver. Below are the times, but this is based on the time listed on your server, not your local time. All times are for both AM and PM:

There are three areas where he will appear, so go to the next if you don't see him in one. Borea's Domain, Leyar Terrace, Croconys Seashore, and Blackrose Chapel are the four map locations listed below:

Chef Hyde can be found by returning to Luterra Castle and heading to the southwest corner. Click on Chef Hyde to open his shop. In the Adventurer's Tome Specialties tab, you'll find Melting Gelato. Even though you have both ingredients, he will still charge 1,700 Silver.

For more information on Lost Ark, check out All Mokoko Seed Rewards in Lost Ark and All World Bosses Locations in Lost Ark on Pro Game Guides.

How to get all East Luterra Cooking Collectibles in Lost Ark