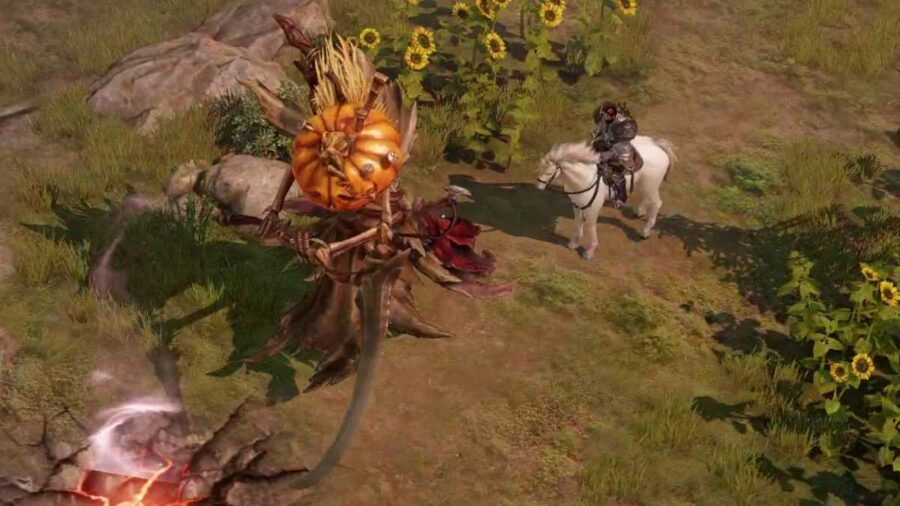 World Bosses in Lost Ark are powerful monsters that spawn in one specific area on a timer. Continents can have one to two World Bosses, and players must defeat these bosses to get 100 percent in that continent's Adventurer's Tome. We recommend fighting World Bosses in groups.

All World Bosses in Rethramis

Rudric spawns in the southern area of the Graveyard, to the east of Regria Monastery, in the Rethramis Border area of the region of Rethramis. This boss spawns every 30 minutes, is armed with a giant scythe, can fear you for a few seconds, and can also spawn a substantial number of undead minions to help it defeat those trying to kill it. To top it off, Rudric has over 10 million health.

All World Bosses in Yudia

Salt Giant spawns just to the southeast of Saland Hills city, on the Aregal Salt Plains, in the Yudia region. This boss spawns every 30 minutes. To top it off, Salt Giant has over 10 million health. Salt Giant uses no weapon but uses heavily damaging Area of Effect attacks that can decimate you if you do not dodge accordingly.

All World Bosses in West Luterra

You can find Rovlen in Biblin Forest. Start at the Grayhammer Mine and head to the right. Shortly after, you will come to a point where you can continue straight or take a path on your character's left. Go down this path, and this is where Rovlen will spawn. You will have to wait for the world boss to spawn, but you can kill it once it does.

All World Bosses in East Luterra

Wili-Wili is located on the northeast side of Sunbright, on a farm surrounded by sunflowers. Since nothing else is needed in this area, you will not need to go here unless you want to fight Wili-Wili. He is at the blue circle on the map above.

Related: What are the World Boss timers in Lost Ark – When do they respawn, explained

All World Bosses in Tortoyk

Caspiel is located on the east side of the center of Skyreach Steppe. He is surrounded by trees and rocks. This area is filled with monsters battling that shouldn't bother you if you do not bother them.

All World Bosses in Anikka

Chuo is located on the east side of the center of Twilight Mists. Random enemies will attack you if you approach him because they are close to his respawn point. The enemies may fall to Chuo, but they will always focus on you.

Chaotic Chuo is located in the Spring of Echoes at the center of Twilight Mists. Monsters at this location will attack the player as they approach. When he spawns, Chaotic Chuo will be at the very center of this area.

Related: How to unlock the Abyssal Dungeon in Lost Ark

All World Bosses in Anikka

Signatus is located southeast of Soldier Ant Nest but north of Hoverboard Testing Site. There are no other monsters in this area, so you can wait here without a problem. As soon as Signatus spawns, he will be at the center of this area.

Velkan is located on the north side of Tortich, in Crowbelly Gulch. This is south of the Temple of Scptrum and northwest of the Wilderness Area. Random enemies will attack you if you approach him because they are close to his respawn point. No matter how many enemies fall to Velkan, they will always focus on you.

All World Bosses in Vern North

Velkan is located on the east side of Balankar Mountains, past the Mountain Entrance. This is south of Veloran's Hideout but east of Starkeeper's House. There are many enemies on the way to Casrick, but you can avoid fighting them without penalty.

Velkan is located on the west side of Vernese Forest. This area is a maze, but there are two ways to get there:

All World Bosses in Shushire

Velkan is located on the east side of Icewing Heights, near the Maze of Mirrors dungeon entrance. There is also a waypoint next to the spawn point, so you can find Maneth as soon as he spawns.

Tarsila is located on the east side of Lake Eternity, near the Spider Queen's Lair. It is marked clearly on your map when you're at Lake Eternity. It's a scorpion bug monster.

All World Bosses in Rohendel

Magmadon is located on the west side of Xeneela Ruins, at the very southwest corner of the map. It is marked clearly on your map when you're at Xeneela Ruins. This is a huge rock monster.

We will update this as we add more World Boss guides.

For more Lost Ark, check out Perception Shards: What are they and How to get them in Lost Ark on Pro Game Guides.