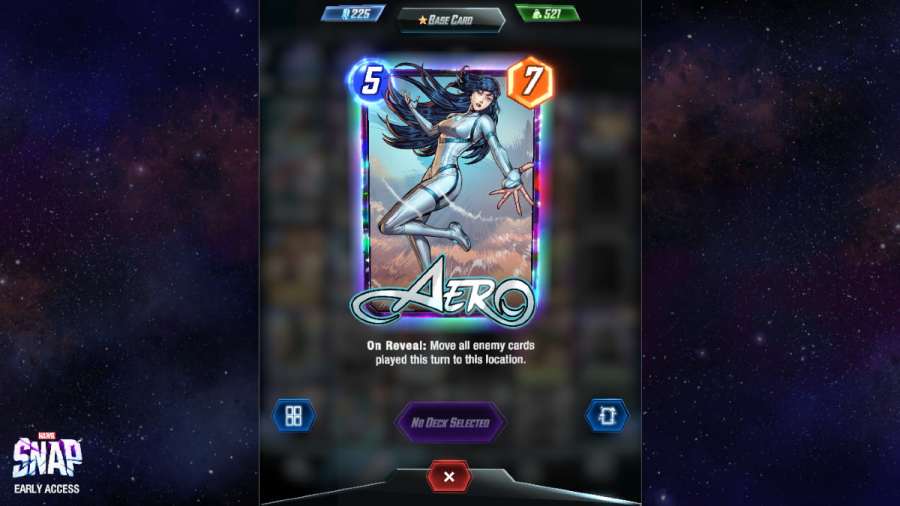 While you can definitely stay competitive in Marvel Snap with just Series 1 and 2 cards, some of the most exciting and powerful cards can only be found in Series 3. For example, unlocking Ghost Rider and Hela can take a Series 1 Discard deck and make it much stronger overall. Furthermore, there are some cards in Series 3 that allow players to create an entirely new deck. Below, you'll find some of these archetype-defining cards as well as some of the strongest cards in Series 3.

The most powerful Pool 3 cards in Marvel Snap

There is a very good chance that Mystique is the most important card in Series 3, if not the best. Her On Reveal ability to copy the last Ongoing effect you played to effectively double it is not just powerful, but archetype defining, especially for Cerebro and Patriot. Furthermore, she makes any deck running powerful Ongoing effects like Blue Marvel or Iron Man significantly stronger.

Mr. Negative is perhaps the most unique card in Marvel Snap due to his On Reveal ability swapping the Power and Cost of all cards still in your deck. This ability is incredibly strong with cards like Iron Man and Mystique due to making them cost zero Energy. The idea of the deck is to hold all your swapped cards in hand for as long as possible, only to drop your payload on the final turn to sneak out a crazy win. This deck has been one of the strongest ones in the game since the beta, and even with multiple nerfs to Mr. Negative over time, the deck is still going strong.

Cerebro is another archetype-defining card, but unlike Mr. Negative, Cerebro decks can take many forms that are defined by the Power stat of their cards. This is due to Cerebro's Ongoing effect of giving your highest Power cards two more Power, which in turn creates decks where all the cards have a matching Power stat. While players have attempted to brew Cerebro decks at all Power stats possible, the best of these decks is the Cerebro Two deck, labelled as such due to most of the cards having two Power.

Patriot is the defining card of the No Ability archetypes which, as the name suggests, focus on playing out cards with no abilities and buffing them up with Patriot and Mystique. Though on the predictable and linear side of play, Patriot decks have become more interesting and powerful over time as players have figured out better ways to build the archetype. The best version of this archetype is definitely Patriot Surfer, which uses Patriot and Silver Surfer to buff large portions of their board to outscale opponents.

For a while, Lockjaw was a narrow but incredibly fun archetype enabler, allowing players to build a deck with some small cards to play into Lockjaw's lane, pulling bigger cards out of the deck. This style made Wasp, Thor, and Jane Foster very strong cards and finally gave them a good deck to call home. However, over time Lockjaw has also become a great support card in Discard decks as well as becoming one of the defining cards in many Thanos decks, making him quite the flexible pup.

Rather than defining its own archetype, Destroyer actually serves to bring the Ongoing decks of Series 1 and 2 up to a very high power level by giving it one of the strongest finishers in the game. The Destroyer deck utilizes cards like Cosmo, Armor, and Professor X to protect the rest of their board while dropping down Destroyer with no consequence to take another lane with a massive 15 Power. Though a quite linear deck, its strength has been proven over time as it continues to consistently perform in high ranks.

Rather than defining any archetypes, Aero is instead an unbelievably powerful card that can slot into almost any deck due to its power and flexibility. The ability to dictate where your opponent's cards will be played allows you to take many games with Aero alone. Though she is a five Cost card, many players consider Aero to be one of the strongest turn six plays in the game, and even after her nerf she continues to be a meta-defining card.

Though typically his On Reveal effect of moving around three and four Cost cards is not as strong as Aero's, Magneto's ability coupled with his massive Power stat make him a formidable card. Sometimes Magneto steals games for you with his 12 Power alone, while in others he will move one of your opponent's key cards only to make it useless in Magneto's lane. There are certainly occasions where Magneto's ability can get in your way, but there will be many others where he takes games all by himself.

There is no way Leader can be understated as a card, as he has been the metagame's defining card for months now. His On Reveal ability to copy all cards your opponent played the turn he is dropped along with the extra three Power he puts into play almost guarantees a win with the right setup. Leader is supposed to serve as a punishing card that takes advantage of decks that dump their hand on the final turn like Mr. Negative, but since players have figured out how to build around him, he typically makes quick work of many of Marvel Snap's archetypes on his own.

Before Leader started to become the top dog in the meta, Wave was probably the defining card in high ranks. Her On Reveal ability to set all cards to four Cost the following turn not only enables her own deck's combos, but also typically shuts down any plays the opponent was thinking of making. Furthermore, her ability to make cards like Death and She-Hulk typically cost zero Energy is the only reason the Death-Wave deck exists in the first place, and now those decks have started to run Leader themselves to make Wave even more punishing.

Discard decks tend to be on the low end of the deck power level, but Dracula is a fantastic card because he can easily be ran outside of Discard decks to incredible effect. Because Dracula's effect of discarding a card at the end of the game and becoming its Power, all he needs to be a strong card is for you to leave a card in hand for him to use. Because of this, plenty of ramp, aggro, and Zero decks run Dracula for another massive payoff to add to their arsenal, making him one of the most flexible and powerful cards in Series 3.

If Dracula is a flexible card, then Juggernaut is the Swiss army knife of Marvel Snap. His On Reveal effect of moving cards your opponent played this turn out of his location can serve a ton of different purposes, but his most effective use is to win a location on the final turn or on the turn the location locks down. For example, the Kyln location closes on turn four, so a Juggernaut can easily win it alone. The same goes for many other locations, making Juggernaut easily one of the most powerful three drops in the game.

Related: How to build a Mr. Negative deck in Marvel Snap

The Hood is another defining card of Series 3 that is in just about every Destroy deck on the ladder. With the On Reveal effect of adding a six Power Demon to your hand, The Hood is fantastic at giving you power elsewhere on the board. However, The Hood is great both inside and outside of Destroy decks, serving not just as a flexible card but a combo enabler. The simplest of these is to use Carnage on him to get rid of him while making Carnage stronger, but sending The Hood to your opponent with Viper or cloning his Demon with Moon Girl allows for some seriously powerful plays.

The funny thing about Brood is that, as a standalone card, it's actually a pretty weak one. You're paying three Energy for six Power which is a great rate, but filling up three spots in a location is a major downside. However, Brood makes up for this by being one of the defining cards in three different archetypes that would struggle without it. Those archetypes are Cerebro Two, Silver Surfer, and Patriot, who each take advantage of brood in different ways. Especially in the case of Silver Surfer and Cerebro Two, without Brood the archetypes would be much worse overall, and for that reason Brood must be noted here.

Daredevil immediately stands out to many players because of his ability to see your opponent's plays on turn five and allowing you to work around them how you see fit. The truth is, this is completely accurate, and Daredevil finds his way into plenty of decks looking to leverage his effect for devastating results. While utilizing cards like Gamora, Hobgoblin, and Professor X to sometimes win games on the spot is incredibly strong, Daredevil's effect is just generically good because it helps you to read your opponent's last turn as well. For the information he gives, Daredevil is certainly one of the strongest cards in Series 3.