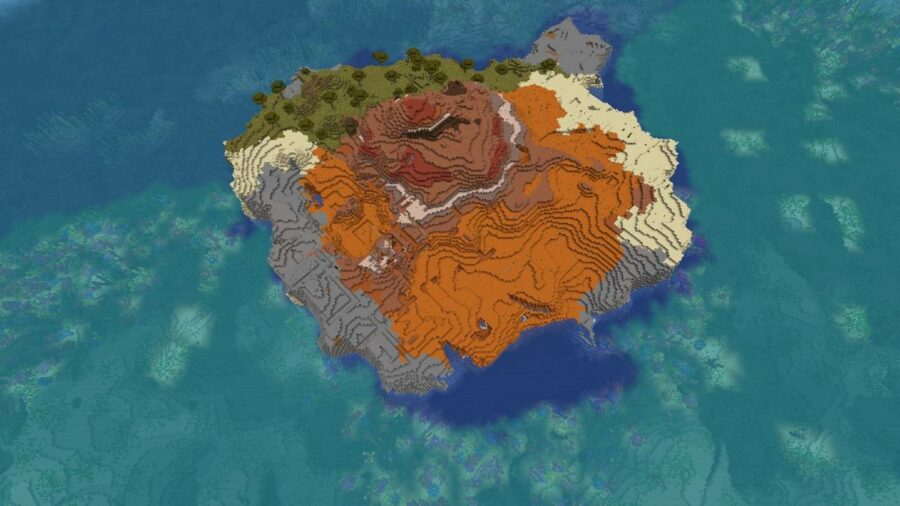 We're looking at some great Minecraft Island Seeds for you to try in your next world! These are for both Bedrock and Java, so you'll be able to find something you like on any platform. Who hasn't envisioned what it would be like to live secluded away on an island? Well, you can make that vision a Minecraft reality by using one of these seeds and building yourself a nice island villa!

This is a wonderful starter island seed with easy access to resources from two villages and an exposed mineshaft right next to spawn. If you want protection from the elements (and mobs), but still want company from villagers in the game, you'll want to start here. Although there isn't a lot of biome diversity nearby, you'll find the basic setup gives you the perfect opportunity to prepare yourself for an adventure. You don't need to jump into the exposed mineshaft until you're ready, so be sure t relax on this peaceful seed!

This incredible island seed spawns you on an island that is over 3k blocks tall and about 1.5k blocks wide. On the island you will find dozens of biomes of varying types and plenty of helpful structures. It holds no less than 5 Villages and Ancient Cities and is surrounded by dozens of Ocean Monuments. In the middle of the island is a ring of mountains that encases a perfect spot to build a base.

Whether you're a lone adventurer who wants to stake claim on an island built for royalty or you're a social player and want a prestigious home for your crew, this is the perfect island seed. You spawn on a large island with several biomes. The only danger lurking on this island is a solitary Outpost that is overlooking a beautiful Meadow. Start The Wilds update right by staking claim of this mountain fit for royalty, and don't forget the island's starter Village on your way up!

This island doesn't fit in with many of the other island seeds on this list because it spawns you in an Old Growth Spruce biome. This is rare enough, but what really draws us into this seed is the generation beneath the ground. The tall island is hollowed out, and resting inside is a beautiful Lush Cave. This cave also includes the naturally generated pool filled with Axolotls shown in the image above!

If you like a challenge and want to live on an isolated island that houses a deep and dark secret, then you want to start with this seed. You don't spawn directly on the island, but a short boat ride will take you to a small island filled with hills and mountains. If you want resources before heading to your island home, you can explore the jungle at spawn and find three Jungle Temples within 500 blocks!

If you don't have an overworld map, you might be surprised that this seed spawns you on an island. It is over 2,500 blocks in diameter, so you'll be in for quite a hike if you want to go end to end. The real draw to this island is that it has most biomes on it and dozens of overworld structures. You'll also find several Outposts and Villages sprawled throughout this massive island. We're not sure what they're fighting over, but maybe the five Ancient Cities under the island have something to do with it. We'll leave you with a few key locations, but you'll have to explore to find the rest!

This is a peculiar formation for an island that also serves as an excellent survival experience. You spawn on an island with a straight, long line of snow-tipped mountains. Throughout the island, you'll find multiple types of wood and several beautiful views of the world around you—which means it will impress you in both form and function. A short boat ride away, you'll find plenty of structures, such as villages, temples, and even a Woodland Mansion!

On this seed, you start on a large Plains island with three Villages, all in different spots on the island. While it's, of course, not identical to the United Kingdom, it doesn't take a huge stretch of imagination to draw the comparison! This is not only a great survival seed with plenty of resources and biomes nearby, but it provides you the opportunity to create some real-world roleplay!

This seed represents the epitome me of the phrase 'basic survival island'. It is the optimum seed for the true Minecraft vanilla fan that isn't searching for anything extravagant and simply wants a chill survival experience on a quaint island getaway. When you spawn on the island, you have access to plenty of trees and a small village, so you'll have all the crops and wood necessary to establish your own community. This is also a great seed to use if you want to host a small survival server with a couple friends!

This is a massive starting island with a single, well-placed Village in between a huge mountain crater. While some might consider it a struggle to go up and down the mountains that make up this entire island, others might see this island as the perfect setup for a villain's lair! Or, of course, you can just use it to establish a safe base with plenty of resources and an opportunity to build an elevated home. Don't forget to look for Buried Treasure! There are over 50 of them on this amazing island spawn.

If you want to add some additional excitement to some of these seeds, then check out our Best Minecraft Mods post!