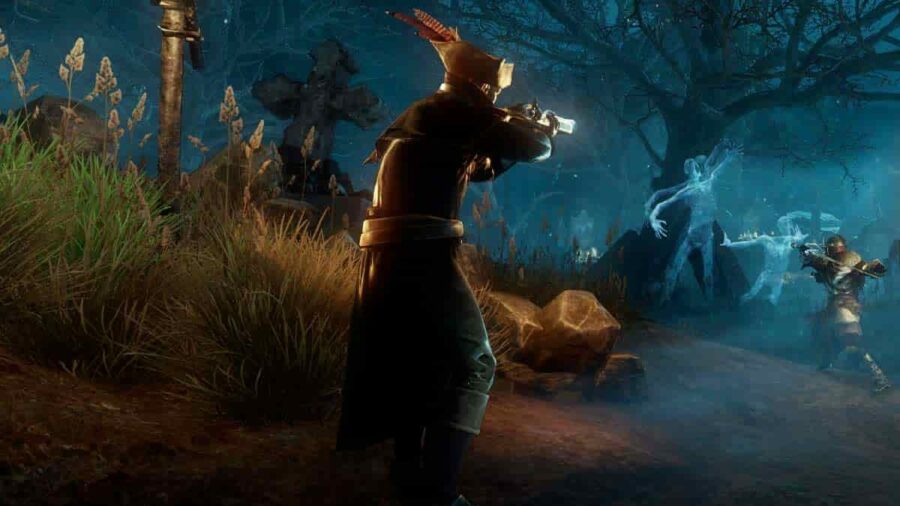 Though not sporting as many ability choices as other prominent MMOs, New World's weapon system allows for good variety when it comes to play style and ingenuity. The musket is for players who value precision and range above all else, allowing them to take down enemies from afar with devastating headshots and crippling traps. However, not every musket build is the same, and there are several builds that stand a cut above the rest. These builds are recommended for both PvP and PvE.

An iconic weapon combo since the beginning of the game, the musket and rapier pair well for a few reasons. First off, they both scale from dexterity first, making it a no-brainer to max out the stat to benefit each weapon. Secondly, the rapier provides mobility and defense, two major boons for the mostly immobile musket; while it certainly isn't the Best Tank Build in New World, it is an incredible survival weapon. Lastly, combining the Powder Burn skill with the rapier's bleeds makes for a debilitating damage-over-time combo. For skills, take the musket's Shooter's Stance, Powder Burn, and Traps, and for the rapier, take Tondo, Riposte, and Evade.

Though the hatchet scales from strength first, its secondary dexterity scaling combined with its damage output and mobility make it a great pairing with the musket. The hatchet sacrifices a bit of the rapier's defensive capabilities but makes up for it through massive damage and good healing. For this build's skills, take Powder Burn, Stopping Power, and Sticky Bomb on the musket in combination with Feral Rush, Berserk, and Raging Torrent on the hatchet. The result is a balanced build that allows for swapping between close combat and sniping from range.

The musket and spear combination could be seen as a zoning version of the musket/rapier combination. The spear has limited mobility and damage options, but it more than makes up for this weakness with its incredible crowd control capabilities. For this combination, the best musket skills are Traps, Powder Burn, and Shooter's Stance. For the spear: Vault Kick, Skewer, and Sweep offer a litany of crowd control mixed with a powerful bleed effect that will keep foes at a distance.

On the surface, this combination seems to be a strange one in lieu of the melee combos before it. However, the fire staff actually covers a major weakness of the musket: thrust damage. In New World, lost and angry earth-type enemies each resist thrust damage and are weaker to AoE attacks. Thus, the fire staff, which has some major AoE potential, covers this musket weakness perfectly. Not only that, but each weapon scales off intelligence and the fire staff even has some mobility to offer. For musket skills, Powder Burn, Sticky Bomb, and Traps combine well with the fire staff's Pillar of Fire, Fireball, and Burn Out skills to make for devastating ranged damage.

Want more information on New World? Go check out the Best Support Builds in New World to learn how to protect allies and recover from injuries.