Risk of Rain 2 has sold over one million units according to a post on Steam. This is the little game that could, while the original had a bit of a cult following, the jump to 3D has pushed the game over the edge!

First off, we are very excited to announce that Risk of Rain 2 passed over 1 million sales on Steam alone in a month since our Early Access launch! To give you guys a little bit of context, it took us almost 5 years to hit that same number on Steam for Risk of Rain 1. We are excited to see how many of you are jumping into RoR 2. Thank you all so much - we feel very lucky.

Last week we released our Content Roadmap, and the initial response has been overwhelmingly positive. As we get closer to the first content update we want to give more details on what's included beyond just the major features listed on the roadmap.

Internally, we have continued to work on the new content update since launch and are really happy with the way things are turning out. This update is particularly exciting for us because ALL of the content included in our first update will be new content to the Risk of Rain universe.Expect a brand-new survivor, map, and more. If you’re a RoR1 fan and you miss some RoR1 survivors - don’t give up yet. Future content updates will weave in some returning content from Risk 1; we hear your wishes!

We hope our first content update plants the seeds necessary to continue growing Risk of Rain 2 into an even better game for players.. This patch will also include quality of life updates and bug fixes! Again, as we get closer to launching this content update we will be sharing more details and even some teasers of what's to come.

As a reminder, we will still be shipping patches containing bug fixes, alongside full localization, before the first Content Update. You can read about that and more in our roadmap announcement post from last week.

We are hard at work on Content Update 1 and are so excited to share more details with you soon. Again, thank you all so much for the amazing support and helping us build this amazing community around Risk of Rain 2.

Hopoo Games isn't going to be resting on their laurels, they've already laid out plans to continue to upgrade the game in the coming months with their recent reveal of a roadmap that details their plans up until Spring 2020. 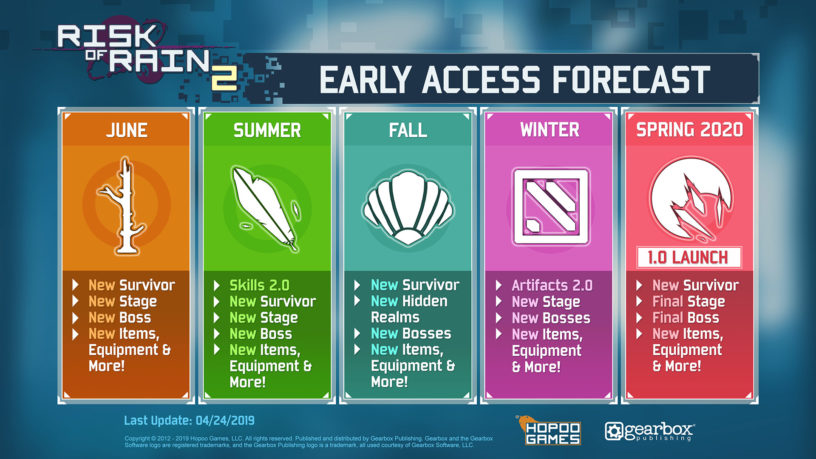 We're looking at new survivors, stages, bosses, and tons more items & equipment in the near future. Skills will also be getting a second pass, and Artifacts will be coming hopefully in the Winter of 2019! We've been playing the game ourselves, and in our excitement created a Risk of Rain 2 Cheat Sheet to easily distinguish which items you are finding in the game!