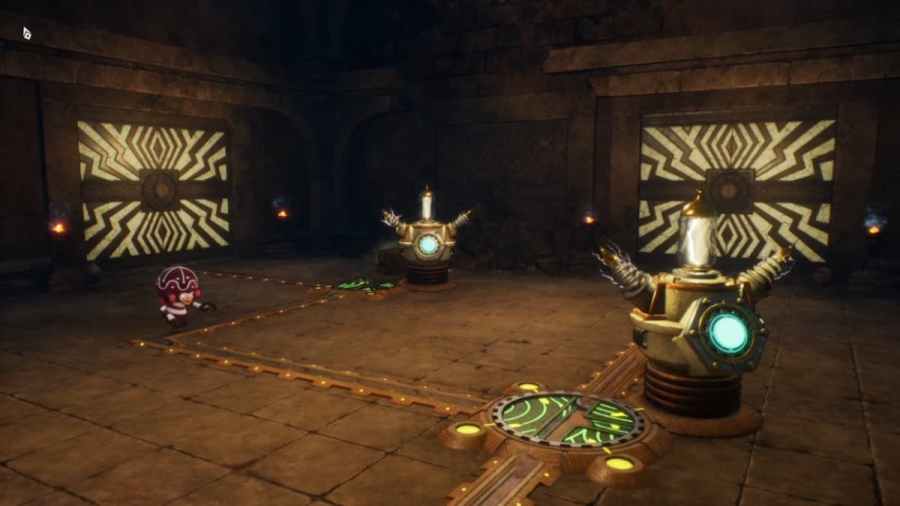 When you first enter the Thunderhead Ruins, you may be surprised to see a small room with a Taxi stand on your left rather than something grander. Your first step is to grapple the stalactite in front of you, then drop down to the level below using the vines on your right. If you look up above, over the stream in front of you, you'll see another set of vines you can grapple to. Gum-gum away, then run down the steps on your right. when you reach the landing below, fight the bat if you wish, then go through the archway to find the source of the Thunderhead Ruins puzzles.

In the Thunderhead Ruins, lightning flows along tracks on the floor from the ruin's entrance. You'll need to help keep this power flowing to open the doors to the Thunder Colossus. If you follow the tracks from the generators at the start of the ruins, you'll come up to your first switch, pictured above. When interacted with, switches will turn 90 degrees clockwise. Turn this first switch twice to proceed.

Go through the door on the right first. You'll find a Zoro cube fragment (for powering up skills!) and a hole on your left that you can crawl through as Chopper. It will lead you to a small platform where you can get a Fire Element Jewelry on your right from a treasure chest. You can also use Luffy's Gum-Gum Rocket ability to grab another Zoro cube fragment across the stream in front of you.

Backtrack to the lighting puzzle switch, then go through the door on your left this time. Follow the lightning track and turn left at the fork. You'll come up to the second Thunderhead Ruins lightning puzzle.

Related: How to change party members in One Piece Odyssey

This second puzzle isn't as tricky as it seems. You'll need to turn both switches twice to get the power flowing in the right direction. Once they're adjusted, go through the door on your right. You'll find a Wild Shock Kabuto to fight and a treasure chest with an Attack +87 Badge inside. Backtrack to the second lightning switch puzzle, then go through the door on your left, leading to the Thunder Colossus.

Before you head into the main chamber, don't forget to sidetrack down the hallway on your right. There's a Thunder Tablet you can pick up for later. There's also a treasure chest a little further down with a Golden Jelly meal inside. Head back toward the central chamber with the Thunder Colossus inside when ready.

Up to this point, you have been helping the lighting pass through, but to shut down the barrier around the Thunder Colossus, you'll need to turn the power off to the four switches around it. To do so:

Go through the door on your left. There's a Zoro cube fragment in the back corner of this room for you to grab. Hop up the platform on your right, then use Gum-Gum Rocket on the stalagtite in front of you to reach the lightning tracks again. Follow the track to another switch you'll only need to turn once. You should loot a treasure chest in this room with another Golden Jelly meal inside.

Related: All One Piece Odyssey Outfits & how to get them

After that, head back down to the center of the main chamber, this time heading to the right. You can fight the Smiley Squirrel in front of you, then head to the back left corner, where there will be a crawl space for Chopper to go through. Follow this path, fighting a few bats along your way until you can climb some vines. Before you go up, grab the Zoro cube fragment hidden behind the rock on the far side of the bottom of the vines.

Climb all the way up the vines, then to the left before climbing back down slightly to find a third switch. You'll need to flip this switch once to cut the power. There's a treasure chest in this room with an Excite Apple inside. There's also some well-hidden Chopper and Usopp cube fragments above you on top of the vines as pictured above.

Follow the still-lit lightning track out of this room. There'll be a Sanji cube Fragment on your right. Then jump through the gap in the banister to the platform below to your final switch. Flip the switch once to shut it down, and you'll be ready to face the Thunder Colossus.

How to defeat the Thunder Colossus in One Piece Odyssey

The Thunder Colossus uses an area-of-effect attack called Thunder Might Iron King that will hit all of your party members, dealing significant damage and potentially paralyzing them. You may need to use Chopper's ability Care (Single) to heal this. The Thunder Colossus is a speed-type enemy, so try to use Power-type characters for an advantage in bringing it down. You'll be given a Dramatic Scene challenging you Beat the Thunder Colossus with Luffy, so try to make sure he gets to deal the final blow.

After you defeat the Thunder Colossus, you'll be rewarded with more cubes and its core. Then transported instantly outside, ending your quest through the Thunderhead Ruins.