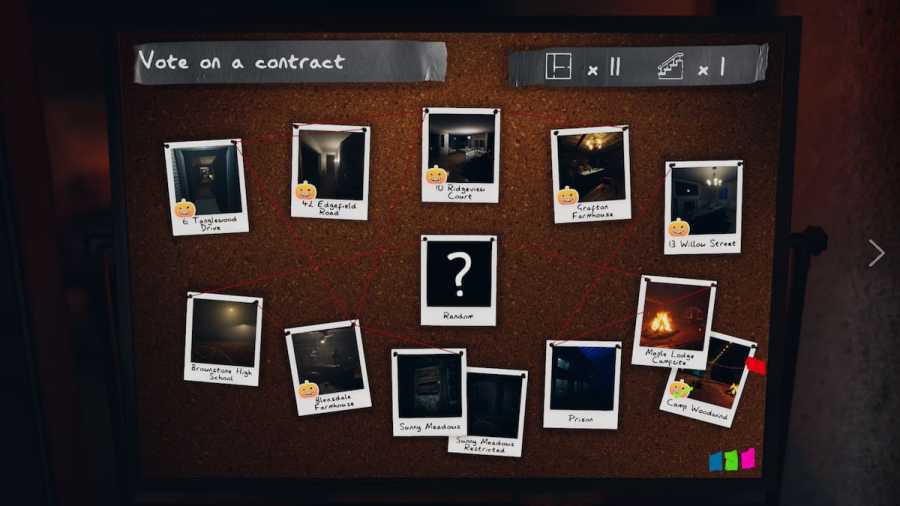 The Halloween Event for Phasmophobia includes challenges for seven maps. Completing every challenge will give players a trophy in their lobby and players can complete these challenges together. Camp Woodwind is the smallest map in the game, making this an easy one to check off for players wanting to complete the challenge. This is how to find all the Halloween Candy and each Jack-o-Lantern in the game.

Every collection of candy that is grabbed will reward players with five Sanity. Players will know that they have collected all the candy on the map after they hear a sound indicating that they have. To complete the challenge, players must be playing on Nightmare difficulty. It would be wise to memorize all the hiding spots on Camp Woodwind because Nightmare difficulty has the highest sanity drain for players. This is where to find all the candy at Camp Woodwind:

As soon as players enter the camp, they can pick the candy on the wooden bench to the left.

There are four pumpkins full of candy that are near the campfire.

Towards the right of the campsite, resting on the table by the camping equipment is some candy.

In the center of the map is some candy by the big tree.

The generator next to the bathrooms has some candy on top of it.

Inside the bathroom, inside the last shower is some candy on the floor.

The two small purple tents will have some candy laying next to them.

Related: All Easter Eggs in Sunny Meadows in Phasmophobia

Toward the back end of the campsite is a wooden table with some candy on top.

Inside the yellow tent on the left side of the campsite is some candy sitting on top of a sleeping bag.

Outside the blue tent on the left side of the campsite is some candy on the floor.

Inside the blue tent is some candy laying on the floor to the left.

Inside the white tent is some candy on top of the lantern. This is on the left side of the campsite.

On the left side of the white tent is some candy laying on the floor by coolers. If the coolers do not spawn, players can still identify this place as it is just past the wooden benches.

Players will have to light all the Jack-o-Lanterns located around the map with their lighters in order to complete the challenge. Once all the pumpkins have been collected and lit, a sound effect will play to indicate that they have all been found. Once players have done so, they just need to take a photo of the Ghost to complete the level. This is easily done with the use of the Cursed Possessions on Camp Woodwind. These are the locations of the Jack-o-Lanterns:

Before even going through the gate, the first pumpkin can be found next to the truck by the yellow barriers.

Outside the gate, players can find a pumpkin to the left sitting on the floor by the wooden bench.

To the right of the campsite, just next to the canopy with the camping equipment are some barrels. The pumpkin sits just beside it on the floor.

Under the canopy by the sports equipment is a pumpkin sitting on the floor.

The campfire has a pumpkin on one of the stumps that is closest to the canopy.

Straight ahead, inside the red tent is a pumpkin resting on a sleeping bag.

Behind the small purple tent is a pumpkin found on a chair. It is just beside the wooden table.

A set of games can be found in the far left corner of the map with the pumpkin found sitting next to it.

Inside the yellow tent is a pumpkin on the left, sitting on a table.

Inside the white tent is a pumpkin sitting on a sleeping bag to the left.

Players have to get a Ghost Photo once they collect all the candy and light all the pumpkins, but this can be difficult depending on the Ghost. These are some ways to trigger a Ghost Event that will increase the odds of the Ghost appearing, or how to safely take a picture of the Ghost during a Ghost Hunt: