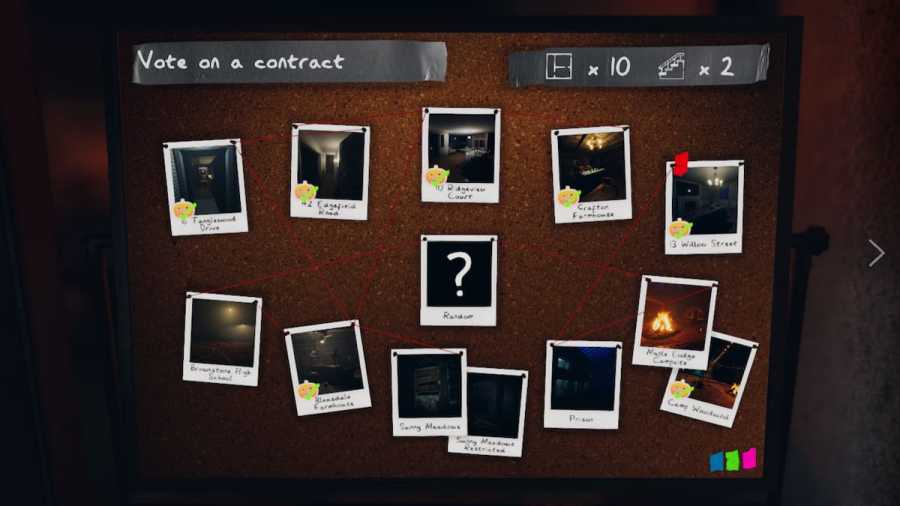 The Phasmophobia Halloween Event's challenge for Willow Street is pretty breezy as long as players know where to hide. Most of the candy is out in the open but there are some sneaky areas that players may not realize candy can even spawn. Players will have to make sure there's no rain as it is necessary for lighting the Jack-o-Lanterns so some resetting may be required. This is where to find all the candy and pumpkins on Willow Street in Phasmophobia.

Candy will only appear on Nightmare difficulty and once they have all been collected, a laugh will be heard to indicate that all of them have been found. Sanity drains a lot faster on Nightmare and every time a player picks up candy, they regain five Sanity. There aren't many places to hide on Nightmare, so players should try to keep Smudge Sticks with them if they take a while collecting everything. This is where to find all the candy on Willow Street:

As soon as players enter the house, candy can be found on the floor to the left. It is by the drawers where the Music Box can spawn.

Two sets of candy can be found in the living room. One if on a chair in front of the TV and the other is on the coffee table.

Candy can be found inside the kitchen cabinets. As soon as players enter, it will be on the right close to the cat food inside the first cabinet of the island.

The entrance to the basement has candy right by the door. This is to the left of the hallway past the kitchen.

On the right side of the hallway past the kitchen is some candy by the entrance to the bathroom.

Inside the bathroom is a pail of candy sitting on the bathtub. This is found immediately to the left as players walk in.

The bedroom to the right at the end of the hallway has a candy spawn underneath the desk.

Inside the bedroom to the right, just on the other side of the bed is the spawn point for some candy sitting on some clothes. This is by the radiator and small drawer with the alarm clock.

Inside the bedroom, to the left of the hallway, is some candy on the left side of the door.

Inside the left bedroom is some candy on the right side of the bed. It is to the left of the beanbag just underneath the small drawer.

Inside the basement is some candy on the middle shelf. This is right at the base of the stairs on top of a green box.

Inside the right or first room in the basement is some candy hanging from the tool rack. This is found on the right wall as players go in.

In the basement, after the turn into the long hallway, is some candy. It is on the other side of a radiator to the left.

Once all the candy has been collected, all players should hear the Ghost laugh. Once this happens, the Jack-o-Lanterns will spawn on the map.

Before playing, look for any of the collectibles, they should make sure that there is no rain. When trying to light any Jack-o-Lanterns or pumpkins, the rain will stop the lighter from working outside. Once all the Pumpkins have been found, players must take a Ghost Photo. This is made easier with the Cursed Possessions on the map. This is where to find all the pumpkins on the map:

Outside, next to the van is a pumpkin by a hedge. From the van, this is on the left of the house.

Inside the house, in the living room is a pumpkin to the right of the TV.

There is a pumpkin sitting on the kitchen counter in the right corner.

Related: How to identify a Myling in Phasmophobia – All Evidence and Tips

In the garage is a shelf with a pumpkin at the bottom of it. This is next to where the washer and dryer are past the red truck.

In the garage, on the right of the red truck is a pumpkin sitting on a stool.

By the entrance to the basement is a pumpkin on the floor by the radiator.

A pumpkin can be found in the bathroom sitting on the toilet.

In the bedroom to the right is a pumpkin sitting on top of the computer just beneath the window.

In the bedroom to the left is a pumpkin on a beanbag. This is to the right of the bed towards the window.

In the basement, just inside the first room is a pumpkin on the floor. It can be found by the doorway on the right, beside the tool cabinet.

In the basement, inside the second or leftmost room, is a pumpkin underneath a workbench. It is sitting beside a gasoline tank.

Once all Jack-o-Lanterns have been lit, the Ghost will giggle to indicate that they have all been found. All that remains is acquiring the Ghost Photo for the challenge, and then players are one step closing to finishing the Halloween Challenge.

For more Halloween Challenge guides for Phasmophobia, check out All Halloween Candy and Jack-o-Lanterns on Camp Woodwind in Phasmophobia on Pro Game Guides.