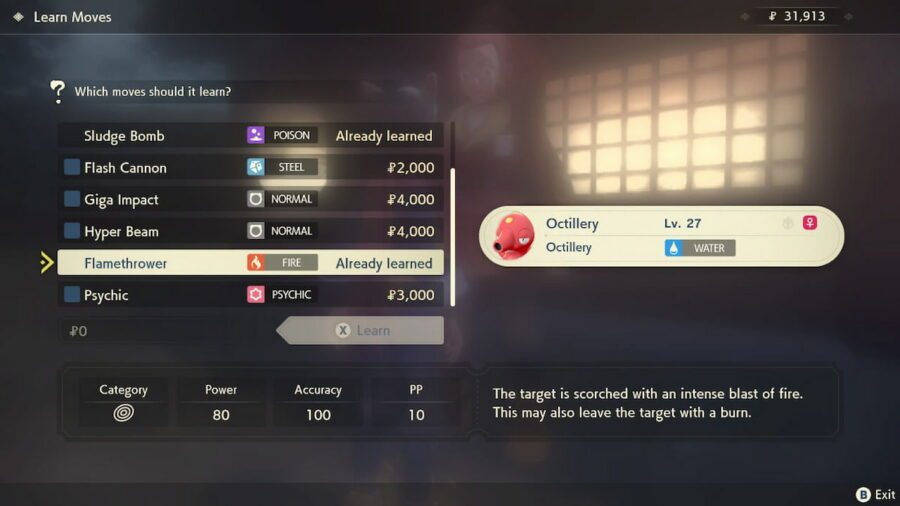 Octillery has some of the best coverage in the entire game with access to many high damaging Special moves. As a pure Water Type, it only has two weaknesses with four resistances, giving it some natural tankiness just from its Typing. Its Attack and Special Attack are very high but it mainly only learns Special moves. These are the best moves for Octillery in Pokémon Legends: Arceus.

Octillery will learn Hydro Pump at level 34 (masters at 45), Ice Beam at level 25 (masters at 35), and both Flamethrower and Psychic from Zisu.

How to use Octillery best in battle

Hydro Pump is Octillery's strongest S.T.A.B. (Same Type Attack Boost) move and hits hard for anything not resistant to Water. It does super effective damage against Rock, Ground, and Fire Type Pokémon. Ice Beam is useful for Pokémon that are four times weak to Ice such as Garchomp or Torterra. It covers Ground, Flying, Grass, and Dragon Types and its chance of giving a Pokémon Frostbite is also very useful. Covering Octillery's Grass weakness makes this move quite valuable. Flamethrower also covers Octillery's Grass weakness while also having the chance of Burning the opposing Pokémon. It covers Grass, Bug, Ice, and Steel Type Pokémon.

Psychic can be swapped for Flash Cannon but Psychic will cover Types that aren't already covered by Octillery's other moves. Psychic will deal super effective damage against Fighting and Poison Type Pokémon while Flash Cannon is strong against Rock, Ice, and Fairy Types. Because Hydro Pump and Flamethrower cover two of these types already, Psychic is the better option between the two. Sludge Bomb is also a very useful coverage move, dealing super effective damage against Grass and Fairy Types but is outclassed by the other moves.

Octillery does exceptionally well against any Pokémon Type it has coverage against. Its low Speed can be difficult to work with but it deals good damage to anything it comes across. If it knew better Physical moves, it could more reliably be a mixed attacker but it will always be better suited to be a Special Attacker.