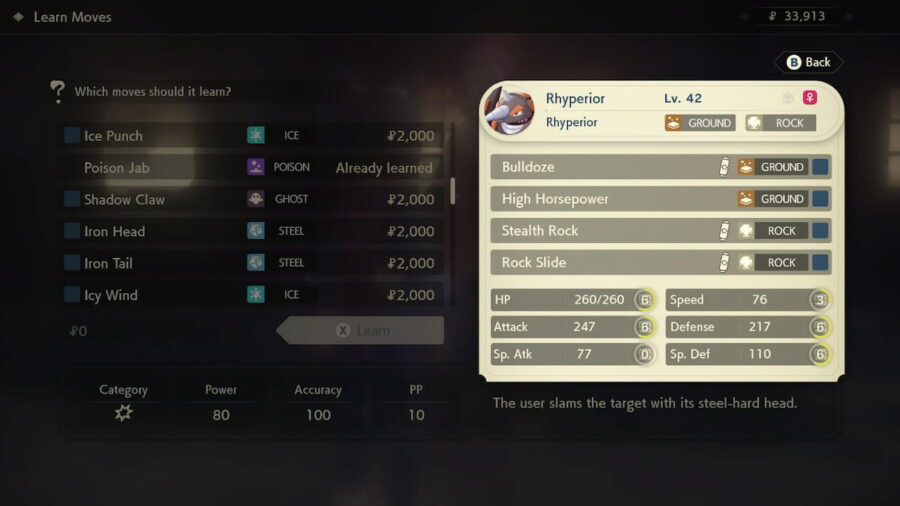 Despite its many weaknesses, Rhyperior is tanky enough to take super effective hits and respond with powerful S.T.A.B. (Same Type Attack Boost) or super effective moves. With a times four weakness to both Water and Grass moves, it can be very dangerous leaving this Pokémon in on something like a Torterra or Gyarados. Even so, Rhyperior has plenty of options and one of the largest movepools in the entire game. These are the best moves for Rhyperior in Pokémon Legends: Arceus.

Rhyperior will learn High Horsepower at level 34 (masters at 45) and will learn the rest of its best moves from Zisu.

How to use Rhyperior best in battle

Stone Edge and High Horsepower are Rhyperior's S.T.A.B. moves are will do the most damage against anything that isn't resistant to them. Stone Edge has a high critical hit ratio and is super effective against Flying, Ice, Fire, and Bug Types. High Horsepower can be used in the Strong Style to increase its Accuracy to make sure it doesn't miss. It is super effective against Rock, Steel, Fire, and Electric Type Pokémon.

Thunder Punch covers Rhyperior's greatest weakness in Water Types as they are the most common Type in Pokémon. It also deals super effective damage against Flying Types but won't deal as much damage as Stone Edge. Against Gyarados, Thunder Punch will deal four times its damage as Gyarados is a Water/Flying Type.

Poison Jab gives Rhyperior the ability to take out Grass Types, its other four times weakness. Grass Types aren't as common as Water Types and a case can be made to run Fire Punch instead, but Stone Edge and High Horsepower already cover anything that Fire Punch would be useful against. Poison will give Rhyperior coverage against Fairy and Grass Types.

Leaving in a Rhyperior on a Pokémon with access to Grass or Water moves is brave. It can tank anything on the Physical side, but it is quite frail on the Special side of things. Sometimes it is necessary to keep it in battle, and in cases where there are no other Pokémon to switch to, Rhyperior has access to over 28 moves from Zisu alone. This gives it coverage against nearly every Pokémon Type in the game and with an Attack Stat of 140, all it needs is one hit to take it out.