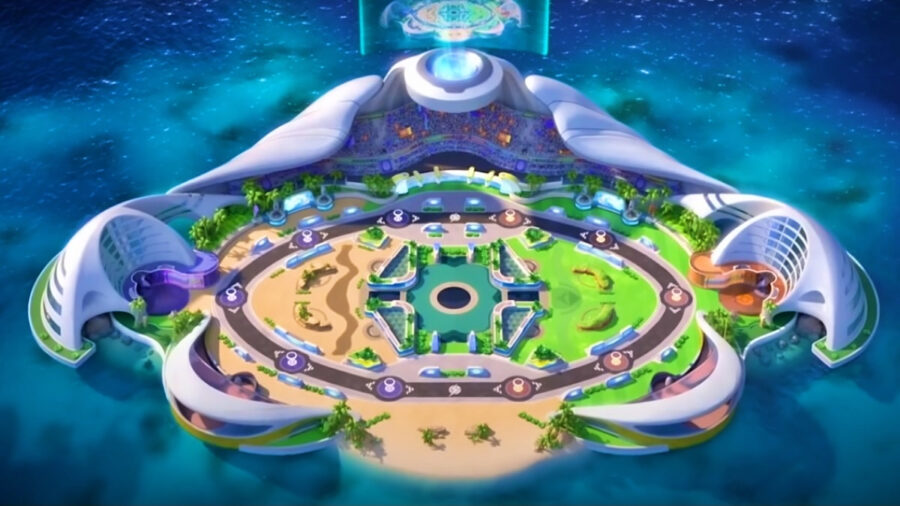 Pokémon Unite has debuted four different maps of the battle arenas to be released upon the MOBA's launch. Trainers, get ahead of the game and get ready to strategize!

All Maps and Battle Arenas in Pokemon Unite

From the largest battle arena that requires coordinated team strategy for massive team battles, to the smallest that demands players to be agile and maintain focus on the roles of their Pokémon; including detailed tips for each arena, take a look at our list of all maps and battle arenas in Pokémon Unite.

As the largest map in the game, this battle arena is designed for intense 5v5 Trainer brawls. Remoat Stadium calls for some extreme team coordination for massively strategic plays, inside some of the biggest Pokémon Unite battles that players will experience! Players can challenge powerful opposing Pokémon at the maps Paths and Beach Area locations; and if victorious, they can earn Exp. Points, shields for their allies and even gain the defeated Pokémon as an addition to their team.

The snow covered city of Shirve consists of one single goal that drives teams into frantic battles for constant map control. The Speed Flux Zones can be used to aid allies in battle, temporarily increase the movement speeds of the player's Pokémon and collect Sitrus Berries that can be used to heal them. Performing KO's and assists at Goal Zones will help increase players' goal-scoring speeds to advantageously rack up major points on opponents!

Related: When does Pokémon Unite release?

Auroma Park is a 3v3 battle arena that players will not want to underestimate. It critically demands agility in battle and dedication from players to focus on the role's of their Pokémon. Players can use the Conveyer Belts to cut across the park at high speeds and deviously trap retreating enemies. Players can also use the Conveyer Belts to quickly get to the Legendary Pit when Regigigas, the Legendary Pokemon of Auroma Park, spawns to score a considerable amount of points for the team.

Mer Stadium is one of the lesser complicated maps in the game, but players would be wise to not let their guards down in this arena. The 4v4 map allows players to use the Central Area of the stadium to strategically utilize the tall grass to sneak up on the Wild Pokémon of the opposing team for stealthy encounters and helpful Paths that can be used to coordinate with teammates around the goal zones to dominate in battle!

Be sure to stay up to date on the highly anticipated MOBA game, Pokémon Unite! Including all 19 playable Pokémon characters in our list of the Full Pokémon Unite Roster | All Available Pokémon.