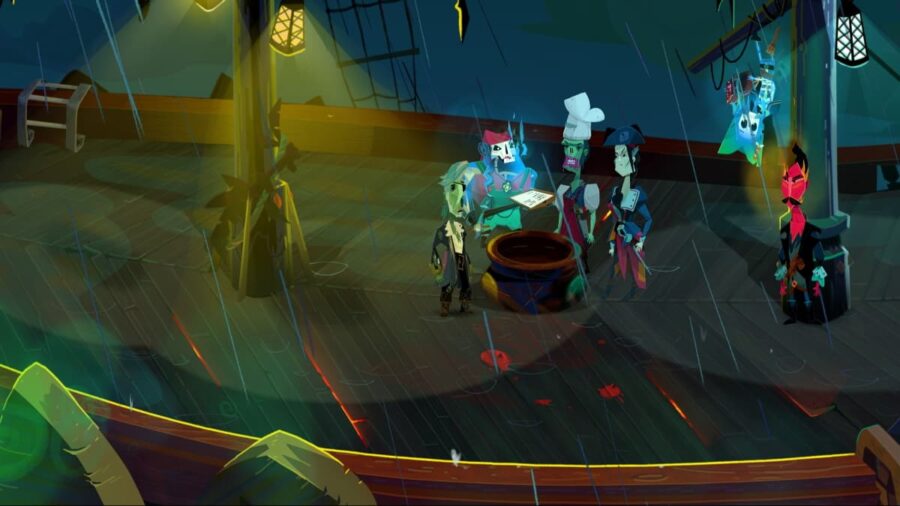 If you've been playing Return to Monkey Island, you'll likely have point-and-clicked your way onto LeChuck's ship as Second Swabbie. And if you're reading this, we'll assume you've seen our hero Guybrush Threepwood be promoted to First Swabbie too. But with the monkey Island potion ruined, there's still much to do. Unfortunately, the rest of the crew doesn't want to go. So, how do you get a unanimous vote on LeChuck's ship in Return to Monkey Island?

Climb into the crow's nest and use the spyglass to watch what's happening on Captain Maddison's ship. It looks like they need a skull, but they have the potion. However, you'll need to convince all five crew members to change their vote and agree to go on to Monkey Island.

How to get Quartermaster Rose's support – Casual & Hard mode

Talk to her to find out that she is no longer inspired to follow LeChuck. Give her the Inspirational Pamphlet you can find in the hold, and she'll be happy to change her vote.

How to get Flair Gorey's vote – Casual & Hard mode

She wants her whale knife, which is stuck in Gullet who LeChuck threw overboard. Climb back out onto the side of the ship and go down to the rudder. Gullet is stuck there. Now you can remove the whale knife and take it back to Flair, gaining her support.

How to get Putra's vote – Casual & Hard mode

The Chef will vote with Rose, so her vote isn't a problem. However, you need her to make a Scorched Alaska (see below), and she won't do it until she is promoted from Cook to Chef. Talk to her to get a copy of her Promotion Request and take it to LeChuck. He refuses to sign, instead giving you the First Swab's Report to complete. You need to log five messes around the ship:

There are even more problems to report, so just stroll around, and write in at least five of them to complete the list. Once completed, get Iron Rose to initial the report. Now combine the promotion request with the other papers for LeChuck to sign. Take the signed promotion back to Putra, who will now make you Scorched Alaska dish.

Related: What's the difference between Casual and Hard mode in Return to Monkey Island

After talking to him in the crow's nest, hand Flambe Scorched Alaska. Once he eats it, he'll pledge you his vote and be willing to lend you the joke book he was reading. You'll need it for Apple Bob.

Follow instructions for Casual difficulty. When you bring Scorched Alaska to Flambe, he'll refuse to take it as it's not spicy enough. Approach the ship's cannon and use the knife on a glowing stick. Use the stick to burn Scorched Alaska. Take the dish to Flambe, and he'll be happy to give you his vote.

Apple Bob just wants to be entertained, but he's not sure what he wants. Give him the joke book you took from Flambe, and he'll also promise you his vote. Now that you have the whole crew on your side begin the voting process.

Ask Quartermaster Rose for a recount, and she'll tell you to gather everyone. Go to the ship's right side, get up the stairs, and ring the bell. The crew members will vote to follow Madison's ship heading to Monkey Island. Now, all you need is that map LeChuck holds in his Captain's quarters.

Are you looking for more on Monkey Island? Check out How the Hint Book works in Return to Monkey Island on Pro Game Guides.