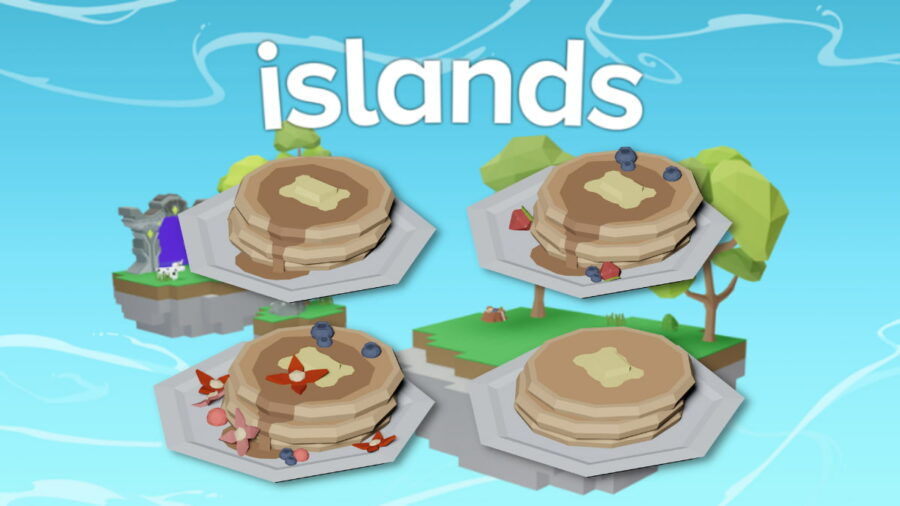 Along with the addition of turkeys, raspberries, and Maple Sap comes the fan favorite breakfast food, pancakes! This new Islands meal comes in four varieties and can be crafted in just a few steps. In the guide below we'll be walking you through these steps and listing all four pancake recipes and their necessary ingredients.

Before you can begin creating your various pancake flavors, you'll first need to create your basic pancake dough. The recipe for this dough is obtained after completing the steps below. For a full breakdown of these steps, check out our guide on how to get Maple Sap in Roblox Islands.

After completing the steps above, you will be awarded with the pancake dough recipe. To make pancake dough, all you'll need is a cooking table and nine wheat. There is no cooking level required for this recipe, so anyone can make it.

Once you've made your pancake dough, you'll need to cook it over/on a campfire, small furnace, desert furnace, or industrial oven. After the dough has cooked, it will turn into a stack of plain pancakes. To move forward with Bailey's next quest, bring her five of these plain pancakes.

After doing so, Bailey will thank you and give you two new items, the Syrup Bottler and Sap Boiler. She'll then ask you to use these items to make her 10 sweet pancakes, which are just plain pancakes covered in syrup. To get started on these pancakes, head back to your island.

Related: How to get steel rods in Roblox Islands?

On your island, locate your tapped maple trees. Depending on how you want to set up your system, you can either attach your sap boiler directly to one of your trees, and then connect your syrup bottler to that, or, you can use your Maple Workbench to create wood pipes and build wood pipes out from each of your trees and merge them in the middle with the sap boiler—the choice is completely up to you.

Maple Baker Bailey's cousin, Berry Farmer Emma, can be found across the long wooden bridge. Speaking to her will start the turkey quest, in which you'll be asked to spook numerous turkeys and collect 20 raspberries. If you successfully bring Emma these 20 berries, she'll award you with the berry pancake recipe in return and will continue the quest by asking you to make her 10 of these pancakes.

Once you've collected enough ingredients and have made 10 berry pancakes, return to Emma the Berry Farmer and speak with her. In exchange for the pancakes she will give you a turkey egg, a few raspberry seeds, and the recipe to make berry baskets. Unlike any other fruit in Islands, raspberries cannot be harvested by Robloxians, they can only be harvested by turkeys.

Because of this, you'll need a turkey on your island if you wish to grow and harvest any raspberries of your own. Turkeys will harvest these fruits and place them inside of crafted berry baskets throughout the day.

After completing Emma's quest line, she will point you in the direction of Don, another member of Emma and Bailey's family. Don can be found behind Emma on the edge of the pier, standing next to a large hot air balloon. In exchange for completing Don's make 50 berry pancakes quest, he will fly you to the Fhanhorn boss's spawn location.

Defeating Fhanhorn can be tricky, as this boss has the ability to heal himself with maple trees. To stop Fhanhorn from doing this, cut down as many maple trees as you can while battling him. After defeating Fhanhorn, you will be awarded with a few Fhanhorn Flowers and can speak with Don again to receive the recipe for Fhanhorn's pancakes—these pancakes require one stack of berry pancakes and three Fhanhorn Flowers.

Related: How to Make Money Quickly in Roblox Islands?

A brief summary of each pancake can be found below: