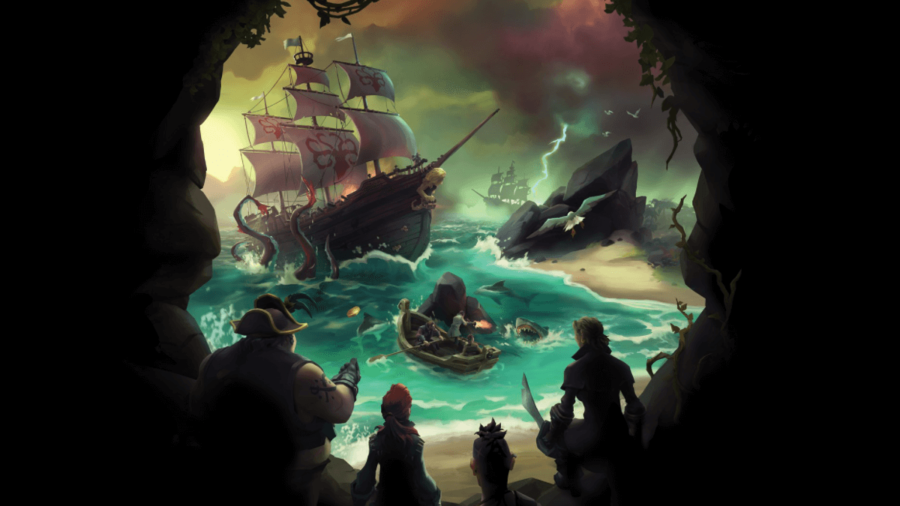 The Fourth Sea of Thieves Tall Tale, Stars of a Thief, is the most clever one so far. Sudds, a sort-of-astronomer but mostly-astrologer, takes the reins as the protagonist of the story. Sudds is the type of pirate who seeks truth and knowledge above petty things such as treasure and power. He'd rather explore the mysteries of the universe than discover new frontiers. You'll realize this along the way as you uncover his history as one of Briggsy's old crewmates.

In this section of the guide, we will start you off from the beginning.

The Fourth Sea of Thieves Tall Tale, Stars of a Thief, is the most clever one so far. Sudds, a sort-of-astronomer but mostly-astrologer takes the reins as the protagonist of the story. Sudds is the type of pirate who seeks truth and knowledge above such petty things such as treasure and power. He'd rather explore the mysteries of the universe than discover new frontiers. You'll realize this along the way as you uncover his history as one of Briggsy's old crewmates.

In this section of the guide, we will start you off from the beginning. If you have already started and found the Spyglass and you were looking for help with a different part of the adventure, you can follow the link to it in the list below.

If you have started the guide and want to skip straight to solving the riddle behind the Spyglass, go ahead and Skip to Step Two. Otherwise, continue reading from Step One to see how you start this starry adventure!

HIDDEN JOURNAL LOCATIONS: When you start this adventure, you might notice in your Pirate Log that one of the Commendations associated with it is for finding all the Hidden Journals. You must have this Tall Tale active to find these Journals! As such, it is best to look for them along the way, as you visit the islands in your iteration of the Tall Tale. Follow the link above to get the guide to locating these Hidden Journals.

Step One: How to Start Stars of a Thief 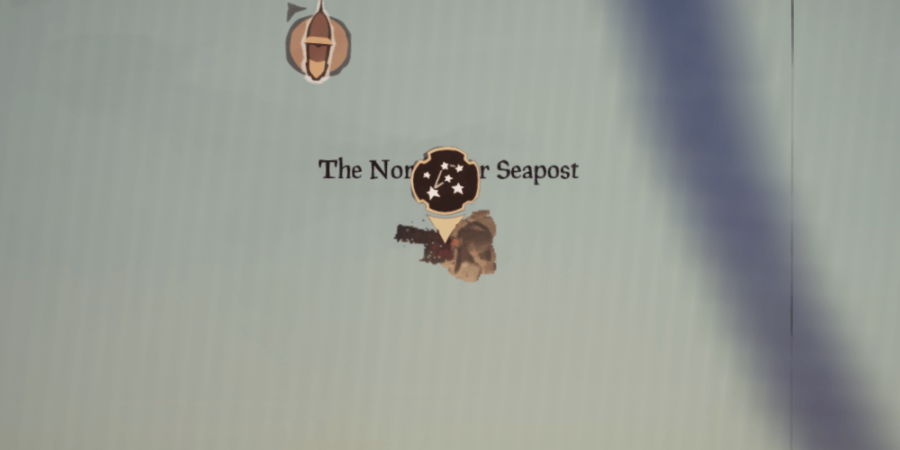 As we mentioned before, Sudds is this story's lead protagonist, and we will follow along with his guidance from old journals he wrote, and wispy poems he remembers. You can find Sudds on the North Star Seapost, which is on map block H10, in The Shores of Plenty.

Upon interacting with Sudds, you will immediately notice he always seems lost in thought and speaks almost exclusively in philosophical terms. This wistful attitude carries on into his quest book, which you'll find directly next to him on the shop counter. Congratulations, you have just found the start to the adventure!

This is the easiest part of the adventure, are there are only two possible locations for the Spyglass. It is an essential tool that you will use throughout the entire Tall Tale, as you will need it to navigate to the islands you need to visit.

When you first read the book, you'll be present one of two stories. It will provide you very simple instructions on how to find this Spyglass that Sudds hid long ago. Both options are listed and explained below. 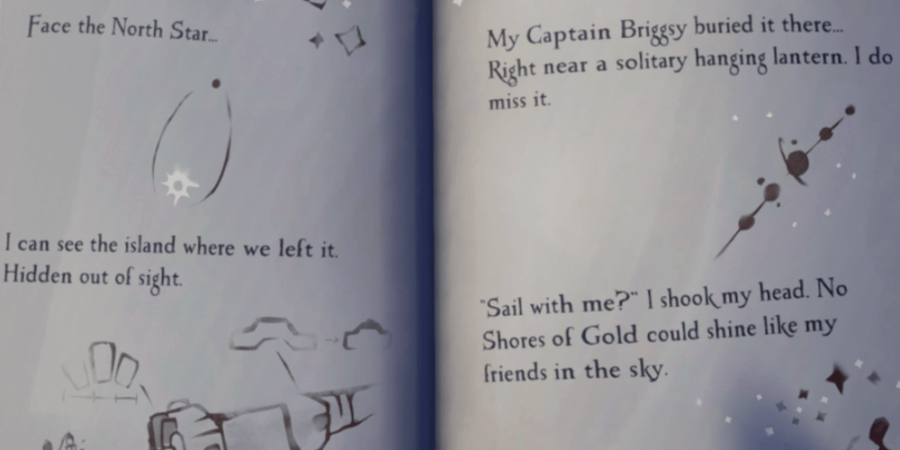 This instruction is straightforward, and easy to understand. Starting from where you got the book (The North Star Seapost), you must face the North Star. It's up for debate on whether or not the North Star actually exists in the game, but essentially, this clue is telling you to face North. The next hint in the book also suggests that if you use your own spyglass, you can see the island you need to head to not far away. You can do this, but we just used the Ships map to determine our first location: Rum Runner's Isle.

The third hint in the book (shown above) tells you where to dig: under the hanging lantern. When you do this, you'll hear the familiar clink against the chest. Inside this chest is Sudd's Spyglass. 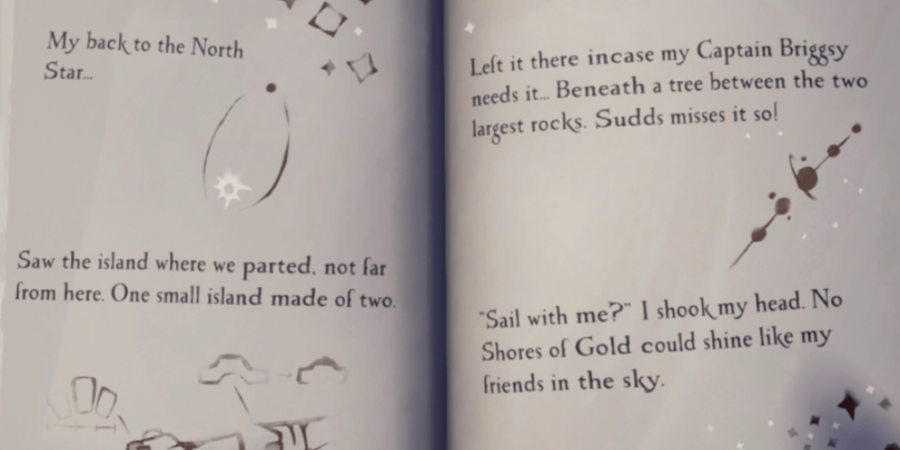 If your book looks like the image shown above, it's trying to tell you to look South. Your starting place will be the North Star Seapost, and you'll need to face your back to the North Star. It also makes the suggestion that you can use your own spyglass to sea the island made of two, which is referring to Twin Isles. This is your first destination and where you'll find the Spyglass.

The third hint in the book will tell you that you need to dig at the tree that's between the two largest rocks. When you do this, you'll find an Ancient Chest. Inside this chest is Sudd's Spyglass.

Step Three: How to Use the Spyglass

If you haven't gathered by now, this Tall Tale does not involve a lot of earth-based navigation. Instead, you'll be navigating via stars in the sky. Sudd's Spyglass is special because it highlights constellations when you spot them through it, and shows you the image of what those constellations represent.

If you'd like to try this for yourself, just pull out the Spyglass and look at the stars! If you move it around, you will notice that some of the stars in the sky are significantly brighter than most of them. If you center the Spyglass on these clusters of bright stars, lines will start to form between them and you may here a sound that signifies that you found something important.

While this is simple enough to understand, there is a bit more to it than that. The pages added to the book detail these constellations, giving them names and very short descriptions. These names and descriptions are important later. In other parts of the guide, we will provide spoilers that tell you the solutions to puzzles involving them. If you do not want the solutions, we strongly recommend you write down the names and descriptions, to have easier access to them!

That sums up the first part of this guide. The next part of the guide will cover the possible locations for the stories that are (surprise, surprise) randomly generated for you. Follow this link to go to that part of the guide: the Jewels' Stories Locations.

While you're completing the Tall Tales, why not become a Pirate Legend? Check out our guide on how to get this prestigious title!

All Sea of Thieves Tall Tales in Order