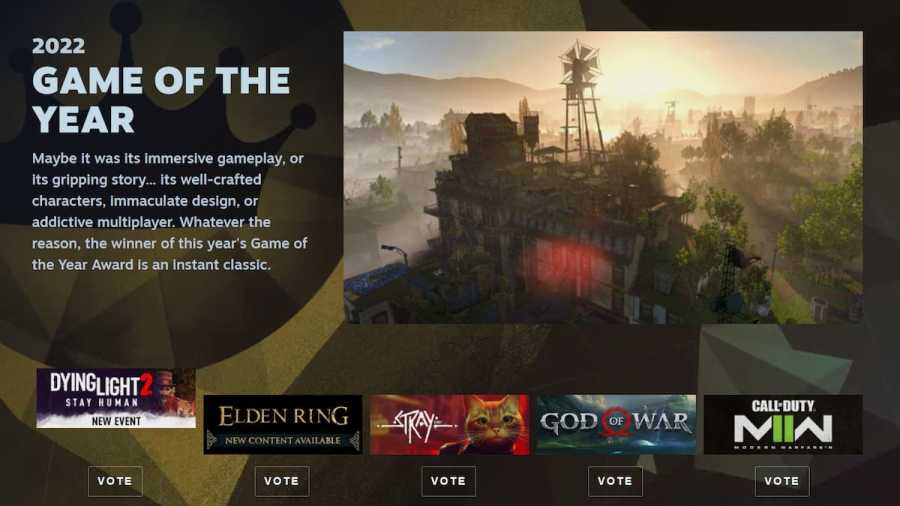 Steam has announced its nominations for Game of the Year, with some being more surprising than others. That's why we've broken down every nominee for this category of the Steam Awards 2022. We also included a quick guide on how to submit your vote!

All Game of the Year Steam Awards 2022 Nominees

While the critical response may be a bit more complicated for Call of Duty: Modern Warfare 2, the popularity of this remake can't really be disputed. The FPS, popular for both its campaign and online multiplayer, burst onto the scene in October 2022 but made enough of an impact in less than two months to get nominated. We wonder if its short time from the release will hinder its chances against the other entries to the competition.

Who doesn't love zombies? The second installment in the series, Dying Light 2, is a zombie action RPG with both a campaign and multiplayer mode. Even though the zombie craze in media has died down, a game with high enough quality can surpass trend limitations. The second game sacrificed a bit of the horror to make it more focused on performance, ultimately making it more popular with a larger audience. We thank this may be the key to its nomination.

Was anyone expecting Elden Ring not to make it on the list of nominees for Game of the Year? The ultra-challenging RPG came onto the scene in February 2022, yet it remained steady with traffic throughout the year. Craft your character to traverse the dangerous terrain of The Lands Between. On top of the addictively hard-to-win story, Elden Ring also brings a fun multiplayer mode that players have taken to.

Related: How to restart Steam

Few franchises have captured the hearts of gamers around the world in quite the way God of War has. We can't say we're shocked that the game made it onto the list of nominees. Like other series games, you'll tag along with Kratos for an immersive and action-packed story. Mythology may be at the center of the game's plot, but don't neglect to notice the breathtaking visuals and engaging mechanics.

Hitting the gaming market with a big splash, Stray will stay with many for some time. That's why it is no surprise that this cat-led adventure game has made it on the list of nominees for Steam's Game of the Year. Players take on the role of a stray cat who wanders through a futuristic city full of interesting tech, danger, and quests at every corner.

How to vote for Steam Awards 2022 Game of the Year

Want to read more about Steam? If so, check out How to check for updates on Steam on Pro Game Guides.

All Nominees for Steam Awards 2022 Game of the Year