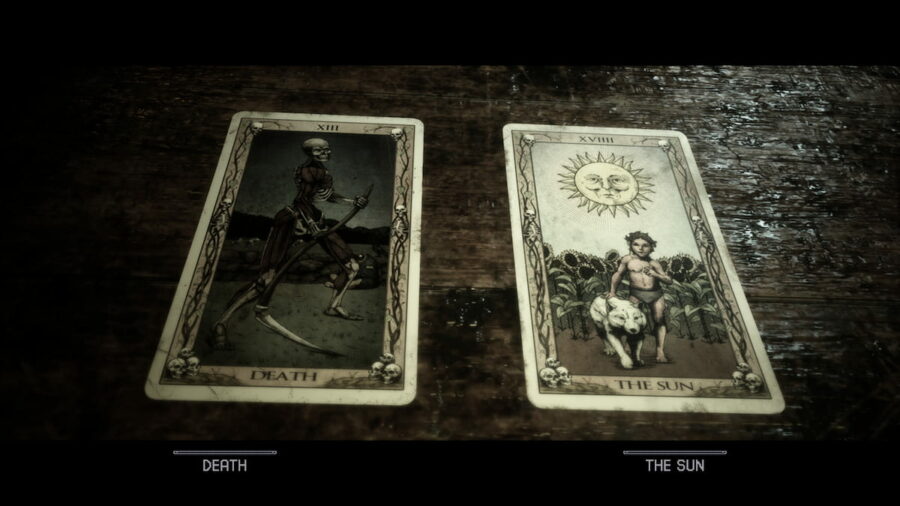 How to save everyone In The Quarry

Only the main cast needs to stay alive, the Hackett's fates do not matter. On subsequent playthroughs, players will have the Death Rewind feature to make it easier.

Should you be nice to the cop or not?

During the Prologue of the game, many of the player's choices don't make much of a difference apart from being nice to the cop—this is essential to do.

To gain additional exposition and dialogue, players can grab the map, snoop, and be nice to Max. When speaking to the cop, players should be Compliant, Honest, and Friendly.

At the end of the chapter, the decision on what to do about Max will not affect the survival rate of any characters.

Related: All the main characters and voice actors in The Quarry

Should you break the Fuel line or steal the Rotor Arm?

During the first scene of Chapter One, while playing as Jacob, players should choose to steal the rotor arm instead of breaking the fuel line. This ensures that other characters will be in an easier-to-control environment later in the game.

Should you break into the Cabin or leave the bags?

The Doll Inside The Cabin

Players should break into the cabin during the second scene while playing as Abi. Exploring around, Abi will find a doll. Players can take this doll for safe keeping to ensure the safety of counselors later in the game.

Getting Along With Everyone

Should you take the fireworks or not?

While playing as Emma during Chapter Two, they can acquire fireworks they have an option to use later on. When inspecting the second locked door, Emma can call Jacob to unlock it. Inside the room is a safe code that she will automatically use when leaving. The fireworks ultimately have no bearing on whether Emma survives or not but can be left behind if only to save time in cutscenes and a QTE.

The rest of the chapter can be played however the player decides to.

Should Abigail help Nick or Run to the Camp?

While playing as Abi during the scene with Nick, choose to help Nick. She should not react and avoid climbing the tree. Hiding as Abi and succeeding in the Don't Breathe event will ensure that no complications arise through the rest of the game. If players get bitten, this can be resolved later in Chapter Nine.

NOTE: Nick will always get attacked and there is no way to prevent this.

Jacob's first scene with Emma has no decisions that directly affect survival.

Should Nick take the shortcut or follow the path?

While playing as Ryan, players should be Assertive and take shortcuts both times. Not failing any of the QTEs will award players the Nick of Time achievement. Choosing to shoot the hunter will give Ryan an item that can be useful later in the game.

Should Jacob throw the dirt or not?

While playing as Jacob again, Pleading with the hunter and not throwing dirt will get Jacob covered in blood which gives him some extra protection should players fail QTEs later.

Related: How to play online with friends in The Quarry

Should Ryan shoot or not?

As Ryan, players should apply pressure and avoid shooting. The option to shoot will come up twice and players must refuse to shoot both times.

Should Emma use the bear spray or the taser?

As Emma, players have two opportunities to avoid death. Checking the bags will give Emma a taser and some clothes. Emma can then use the taser in the first encounter, as well as the bear spray in the second. Block the door in the third, and use the trapdoor in the fourth. All four of these QTEs must be successful for Emma to survive.

Should you give or keep the gun?

Afterward, you return to Dylan. After some dialogue, the important choice here is to give away the gun. Giving the gun to Kaitlyn will help if you fail some QTEs in the following chapter.

Should you reel slowly or reel quickly?

When playing as Emma again, players should choose to reel slowly. It makes less noise if players don't press any buttons but choosing to reel slowly twice in a row will have the same result. Choosing to reel in quickly and passing the QTEs, followed by jumping, will still make sure Emma survives.

Should Kaitlyn speak up or not?

Not speaking up and passing all the QTEs as Kaitlyn will ensure the safety of everyone.

Alternatively, players can fail the QTEs and get blood splattered on them. The second failed QTE can be solved by shooting the table.

When reuniting with the others, players can hide and make their escape by passing the Don't Breathe event.

Should you choose the shotgun or the chainsaw?

When Dylan and Ryan are in the radio tower, players should avoid shooting and encourage Dylan to come up with a plan. When things go wrong, choose the chainsaw.

Should you hide or run at the start of Chapter six?

Players choosing to hide while playing as Jacob will be required to pass a Don't Breathe event. If players choose to run, a few more QTEs will have to be passed in order to survive. After this, Jacob can step into a bear trap and must pry it open.

When playing as Kaitlyn, players should intervene and choose to help Nick when prompted to build up the relationship between her and Abi. Choosing to comfort her instead of saving Nick also does this.

Should you shoot Nick or not?

As Abi, being nice to Nick is entirely optional. She must shoot Nick in order to avoid being killed. Nick can be saved later in the game.

While playing as Emma, the paths do not matter as the two of them intersect.

Chapter Seven – The Past Behind Us

Should you shoot Travis or not?

While playing as Laura, players can heavily change the outcome of the game. To keep everyone alive, there are two ways that players can choose to act. Complying with Travis the cop—do not be difficult—and finding the syringe in the third office upstairs will give players the ability to not take the gun.

Otherwise, players will have to take the gun but choose not to shoot Travis. Shooting Travis will cause Laura to die later in Chapter Nine.

Back in the present, Laura must show her bite as it will lead to saving Ryan in a future chapter.

As Jacob, players should plead to avoid upsetting his kidnappers.

Chapter Eight – The Belly Of The Beast

Making sure Laura and Ryan get along

During the interaction between Ryan and Laura, players should avoid any hostile dialogue choices. Making sure that Ryan and Laura get along and don't argue will be important in keeping them both alive. Players can choose either of the first three options and then choose to be Guarded, Compassionate, Friendly, Inquisitive, Reflective, and then Compassionate.

While playing as Kaitlyn, players should choose to be Honest and Encouraging.

Should you open the cage or not?

When exploring again as Ryan, players will need to pass any QTEs they come across. They must make sure to not open the cage and intentionally fail the first Interrupt event. When Laura approaches the other cage, players have to stop Laura from killing Nick in the cage by choosing to Interrupt her.

How to solve the breaker puzzle in The Quarry?

In order to free Jacob, Ryan has to flip the correct switches. They are four switches total and they open up the cages that the numbers add up to. Players must open cages three and five. To do this, Ryan must flip switches in a specific order:

Flip one and two first, followed by switches two and three.

Should you kill Constance?

The only dialogue choices in Chapter Nine that matter are the ones that involve Laura and Ryan. Not far into the chapter. Laura and Constance will struggle for control over the gun. If you mash the prompt you will blast off Constance's face. But if you don't kill her here, she can survive.

Should Ryan pull the knife out?

Should Ryan accept the bite from Laura or decline?

When Laura catches up with Ryan, to keep Ryan alive, Laura must bite Ryan. If he isn't bitten, Ryan will bleed out at some point.

If Emma Was Bitten

If Emma was bitten and she makes it to the car, Dylan will open the car and release her. Players must shoot Emma but choose to use regular shells to make sure that she doesn't die.

If players did not get the stuffed animal when playing as Abigail in Chapter 1, Kaitlyn will need Abi's help.

To do this, Abi will have to search through the basement to find silver shotgun shells by the fusebox to give to Kaitlyn. This will cause her to try to help Kaitlyn in Chapter 10, and Kaitlyn will have to investigate to get the shells.

Should you shoot the charging monster?

Ryan must shoot the charging beast, Chris Hackett in order to save himself, Laura, Nick, and anyone else that got bitten due to the player's actions. If players shot Travis in Chapter Seven, then Laura will be killed. Laura must cooperate with Travis in order to save everyone else.

Should Max swim to shore or stay on the island?

Players should begin the start of Chapter 10 as Max. When given the choice to swim off the island, it's safer for him to stay. If no characters are infected then he can swim to shore, but if anyone is bitten, Max will die if he tries to swim.

When playing as Kaitlyn, there are two methods to ensure both she and Dylan survive.

You can either acquire the silver shotgun bullets or while exploring the rooms and looking for a vantage point, Kaitlyn can go to the kitchen in order to examine the stuffed toy. By examining the toy, Kaitlyn will be able to use it as a distraction later in the chapter.

Get the silver shotgun shells

Choose Prepare For Attack, Kaitlyn should choose Run instead of Wait, and then choose the Beam. Choosing Wait will result in Dylan getting killed. The rest of the options don't matter as long as players perform the QTEs correctly.

When you hear someone calling out, investigate the noise to get the silver shotgun shells, then shoot the werewolf.

If you continue to run with Dylan. You'll end up in the kitchen, Kaitlyn will have to use the doll as a distraction to lead the werewolf into the freezer.

Should you raise your gun at Silas and shoot him?

When switching back to Laura and Ryan, players have to succeed in all the QTEs regardless of if they choose to grab the gun or the steering wheel. Once the characters get out of the car, if players shot the hunter in Chapter Three, Ryan will have a vial of blood that players can use on Ryan or Laura. Regardless of the choice, as long as players shoot Silas, both will survive. Players can choose to not shoot Silas right away, however, this only results in Travis's death.

For more guides on The Quarry, check out How to get the Bizarre Yet Bonafide Achievement/Trophy in The Quarry on Pro Game Guides.

How to keep everyone alive in The Quarry