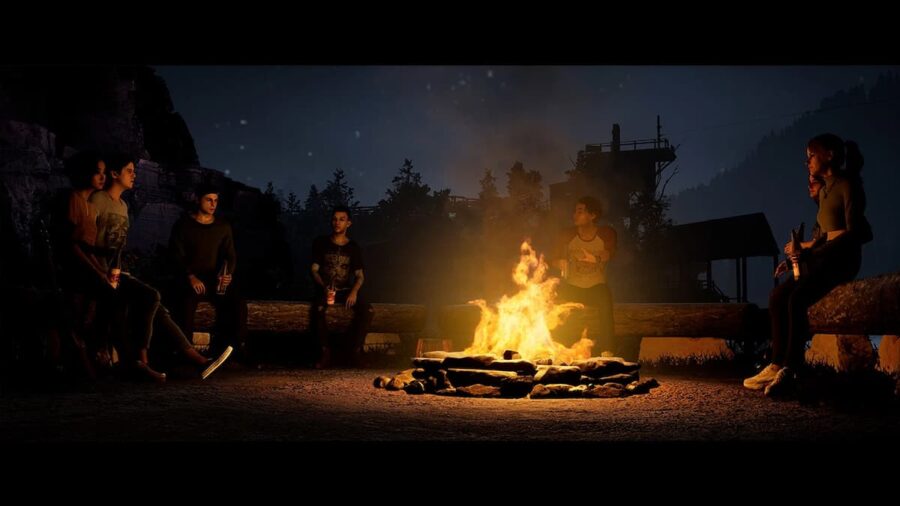 The Quarry transports you into a summertime creature feature with teens, werewolves, and curses. During the chaotic night, players can find various collectibles along the way that can expand the story and prove the happenings of the night. One of those collectibles is known as Tarot Cards, which can be used in between chapters to learn about some of the dangers to come. Here is where to find all of the Tarot Cards in The Quarry.

Where to find all Tarot Cards in The Quarry?

If you manage to snag all 22 Tarot Cards, then you will be awarded the Decked Out Achievement. It is worth stating that the characters you are playing in the mentioned situations may be different in your playthrough, depending on who you managed to keep alive.

Near the beginning of the game, you will help Max with repairing the car while playing as Laura. Laura says that she wants to explore the woods, and Max helps her down a slope in a short cutscene. Once you are able to move around again as Laura, you will see a rock and tree stump in front of you splitting the path. Walk the left-hand path and you will see the camera change, revealing this Tarot Card and prompting you to pick it up.

When playing as Jacob in Chapter 1, you will be tasked with returning to the lodge to collect the bags. After intereacting with the door, you will need to find another method of entry. Heading over to the open window around the side of the lodge will gain you entry. Within the lodge, head to the kitchen that is located back near the front door of the lodge. As soon as you walk into the kitchen, the camera will change, and you will be able to pick up this Tarot Card leaning against the pots.

In Chapter 2, you will take control of Nick. While you are collecting firewood with Abi, you will have to make a decision to go the Rocky Road or the Shady Glade. To find the Tarot Card, you must choose to take the Rocky Road. This will lead you to a new area where you will see a sign that warns of falling rocks. Proceed to the left of this sign until you see the camera switch to the Tarot Card up on the cliff.

A little way into Chapter 3, you will take control of Abi, who is alone in the woods. After you are able to roam around, follow the dirt trail in front of you. The camera will change a few times, and make sure that you always turn down the path that the camera points towards. Eventually, you will see the camera jolt up high to a tree where the Tarot Card lies in wait.

You will cut to a scene where Emma and Jacob are near the lake. Emma will eventually ask Jacob to go and find some towels. As soon as you are able to move as Jacob, take a few steps forward and the camera will change to show you this Tarot card on one of the posts.

Related: Where to find all Evidence in The Quarry

As soon as Chapter 4 starts and you take control of Emma on the island, turn around and head back towards the dock. Walk all the way to the end of the dock where you will see this Tarot Card appear in front of the camera.

After you check back in with the main group, they will decide to make their way back to the lodge. This Tarot Card appears during a cutscene where the group is opening the doors to the lodge. Make sure to grab this card quickly, as you only have a few seconds before the camera changes. If you miss the card, you will have to restart the chapter.

When playing as Dylan in Chapter 5, you will make your way back to the circle of cabins centered around the big tree. Under this tree sits a swing and two picnic tables. Walking between these two tables will prompt the camera angle to change, and it will reveal a Tarot Card stuck to the leg of the picnic table.

Within this same area as the previous Tarot Card, make your way to the radio building in the rear of this area. Before you head inside, check around the left side of the building. Once you clear the corner, your camera angle should change and reveal this Tarot Card stuck to the leg of a radio tower.

In Chapter 6 while playing as Jacob, you will find yourself up on a tall wooden walkway. Once you take the stairs down from this walkway, head to your left until your camera angle changes. You should see the Tarot Card on the underside of the walkway.

When playing as Abi, you'll search the pool house for something to comfort Nick. This will allow you to free roam the pool house. You will find a hallway that has changing rooms along one side. The third changing room has its door open and if you enter the room, the camera will be changed to show this Tarot card on the back of the door.

When you are able to move around in your cell as Laura in Chapter 7, walk forward toward your bed, then immediately turn around and head back toward the bars. Here, your camera should change to show the Tarot Card under the bed.

When you leave your cell and are able to free-roam as Laura in the police station, you can find this Tarot Card by walking in between the desks located in the Police Station lobby. Walking between them will cause the camera to change and the Tarot card will appear up in the rafters.

In Chapter 8, you will fall into a cave with Ryan while playing as Laura. As you are climbing the metal stairs to escape the cavern, you will watch a short cutscene where a platform collapses. In the next section after this, you will see a dead-end path to your left. Walk to the edge of that railing and your camera will shift to show you this Tarot Card. Make sure you do not go up the stairs located just beyond this dead end, as it will trigger a cutscene, and you will not have the chance to go back for the card.

Continue forward in the chapter until you eventually reach a linear tunnel. Walk through this tunnel and your camera will automatically shift to show you the Tarot Card. This Tarot Card is unmissable for this reason as long as you remember to collect it while passing by.

After the cutscene in which you make choices as Kaitlyn, you will return to Ryan and Laura in the Hackett House basement. From where you start controlling Ryan, turn left and enter the doorway. A few feet into this room, the camera will change to show the Tarot Card on the backside of a pipe.

Still controlling Ryan, head back to where you started in this area and proceed straight down the corridor. As you are walking this corridor, the camera should shift focus to a Tarot Card at the end of the hallway.

At the beginning of this chapter, you will take control of Ryan inside of the Hackett House. Walk along the left wall until you reach a wardrobe. You can interact with this wardrobe to be used at a later date when hiding. Then walk diagonally toward a bed in the corner of the room. While walking to the bed, the camera will change to show a Tarot Card on top of the Wardrobe.

Playing as Laura, you will end up in a room with blue wallpaper. Head up the stairs in this room, and enter a room at the end of the hallway. Walking toward the windows in this room will cause the camera to switch its view to outside, where a Tarot Card waits on the window frame.

Playing as Dylan in the Scrapyard with Kaitlyn, you will work your way to a garage. In this garage, you can interact with a button to open a door to a new area. Once you do this, head straight until you reach a staircase leading up to on top of a shipping container. Walk to your left on top of these containers to prompt the camera to switch angles and reveal this Tarot Card.

At the end of the chapter, you will return to Abigal and Emma in the Storm Shelter. Controlling Abi, you will get the opportunity to take a look around. Head back to the stairs that lead out of the Storm Shelter, and your camera will switch to expose this Tarot Card.

In the final chapter of the game, you will start out by playing as Kaitlyn. Go up the stairs to your right that take you to the second floor. You will see another set of stairs leading you up to the third floor. Walking around in this area will cause the camera to switch and reveal the final Tarot Card up in the rafters of the lodge.

For more on The Quarry, check out How to earn the ‘Lovers’ Quarrel’ Trophy/Achievement in The Quarry right here on Pro Game Guides.

All Tarot Card Locations in The Quarry