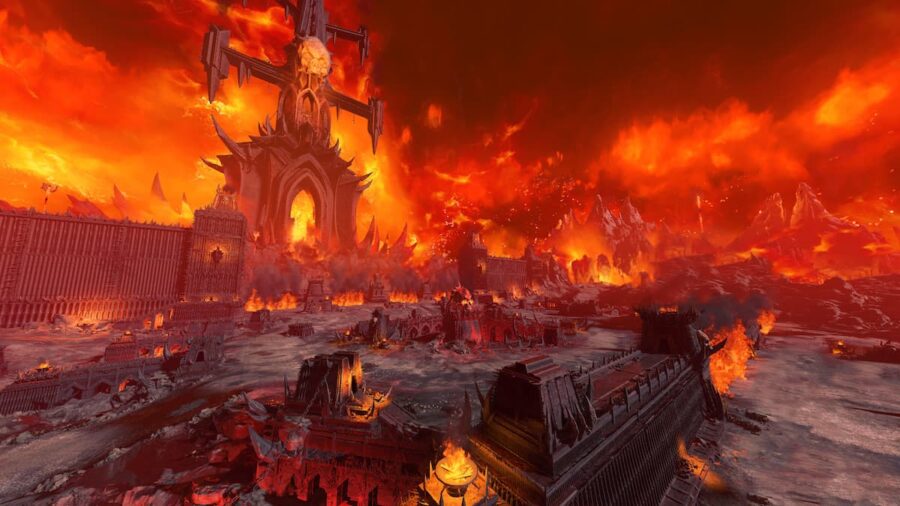 Khorne's realm is the most simple of the chaos gods since he's a god who only wants two things; blood and war. This realm is a crucible where you have to fight and defeat rogue armies to accumulate Bloodshed.

To claim the Khorne's Prince's soul, you need to accumulate enough Bloodshed to challenge him. Defeating an enemy's army will grant you Bloodshed, your Bloodshed is tracked by a small meter above your character's head. As you enter Khorne's realm, you will face off against other armies seeking to challenge the Deamon Prince. Defeating four other armies will grant you enough Bloodshed to enter the Brass Citadel and challenge the Deamon Prince. Defeat him in battle, and you will claim his soul.

Related:How does the campaign in Total War: Warhammer 3 work?

Tips for the Realm of Khorne

In each corner of the map, you can claim a powerful demonic weapon that makes you unbreakable, though you can only keep one. After you complete the realm, you can take this weapon with you into the outside world, but you will lose it when you enter another God's chaos realm. Fighting four battles in a row will drastically drain your troops, So use the Encamp Stance to replenish them. Since, unlike the other realms, encamping is the only consistent way to replenish your army in this domain.

When fighting against Khorne, you'll want to bring a strong infantry line. Armor-piercing ranged units are also great for cracking open the well-armored Chaos Warriors and will help you take down the Bloodthirster.

How to claim the Daemon Prince soul in the Chaos Realm of Khorne — Total War: Warhammer 3