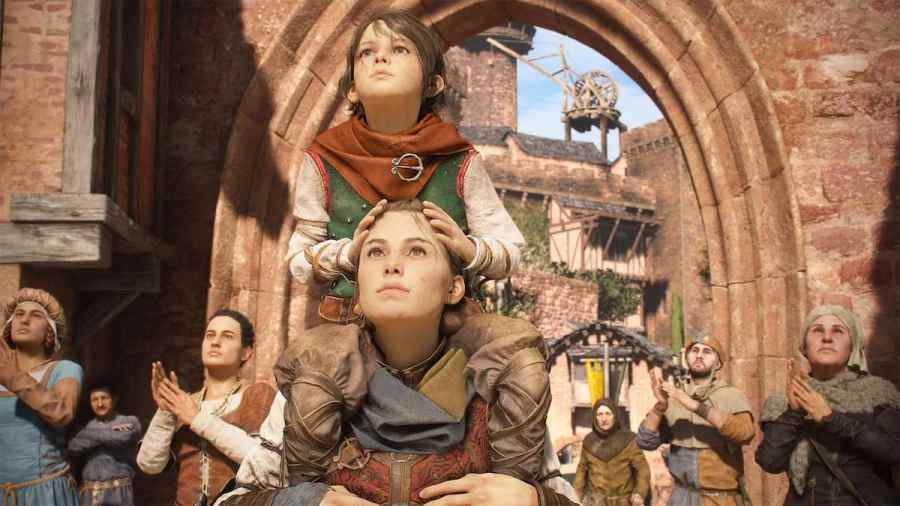 There's finally another chapter to the saga of the De Rune family. Though their home was decimated by the end of Innocence, the beginning of A Plague Tale: Requiem shows a bond between characters that is stronger than ever.

Six months have passed since the end of Innocence, and life has improved for the De Rune family. Now accompanied by Beatrice's assistant, Lucas, the family is headed toward the Order hoping to find a cure for the Prima Macula within Hugo's blood that summons large swaths of plague-carrying rats.

I am a huge fan of the Plague Tale series, and I especially enjoy a spooky game when Halloween is just around the corner, so to say that I had high expectations for Requiem is putting it mildly. While the atmosphere and art style construct the immersive environment I expect from any game that comes out of Asobo Studios, several unbalanced, late-game puzzles and questionable narrative choices mar what would otherwise be a delightfully dark and moving game.

Above all, Requiem nails the environment. These are take-your-breath-away graphics inside of a world that has you biting your fingernails the whole time. While there aren't any intentional jump scares, per se, there were several times that I found myself so immersed in the universe that I shrieked and leapt off of my couch because I thought I saw an enemy coming after me.

What's especially moving is the direction of the art style, which I am only merging with the atmosphere because they operate together so intrinsically and beautifully. Throughout A Plague Tale: Requiem, I found myself in gorgeous fields of wild flowers with the Pyrenees mountains stretching out in the distance. These landscapes aren't integral to the gameplay, but their addition is absolutely necessary. Each one of these fields is teeming with life, just like every city when you first enter it.

As you carry on throughout the story, however, all of the life begins to bleed away until you're left with nothing but a charred husk of a world and tainted memories of a better time. For the ultimate experience, hook up your PC to a controller and a TV screen, kill all the lights in the room, and be transported back in time to a world of danger.

Related: Is there a New Game Plus in A Plague Tale Requiem?

Almost every puzzle I encountered in Requiem was appropriately challenging but remained both fun and doable. Approachability is also a major plus, here. Whenever possible, the developers provide multiple ways to solve a problem, giving the player more agency along this narrative experience. You can evade enemies however you prefer, whether using stealth or distraction. Or, if you're more like me, you can sprint through groups of enemies and dodge their attacks until you escape the area.

In the event that there's only one possible way to solve a problem, the game does a good job of creating linear mazes so that it's impossible to get lost. In a world without a map, this is especially important because the unfamiliar cities and layouts can quickly become overwhelming.

That said, the challenges do get progressively harder. This is a manageable change until later in the game, where a drastic increase in difficulty makes even the simplest evasion on Narrative mode almost impossible. Enemies that usually have no peripheral vision can suddenly spot you through multiple obstacles across a giant room. Their patrol patterns also change whenever Amicia dies, which makes it hard to develop and work through a consistent plan of attack. This is especially frustrating because, up to this point, I truly enjoyed figuring out how to solve each problem, and I still can't say whether I truly found a solution to some of the late-game puzzles or simply glitched through them.

There are three potential stopping points in A Plague Tale: Requiem, and the game chooses none of them. While the continuation of the story after the first potential ending reignites the mystery of the macula and a desire to find a cure within the player, the choice to plow on through several other clear stopping points makes the late-game stage drag to such a degree that, by the final chapter, I was almost hoping that the rats would consume everything so that it could just be over.

This is a huge disappointment, especially because the rest of the story is filled with gripping twists and turns. Not only that, but the discoverable souvenirs and collectibles hidden throughout the world add such a layer of complexity to the characters and story that it feels like there is always a massive discovery to be made in each location, regardless of whether it moves the core narrative forward. In addition, I actually found myself wanting to hunt down the souvenirs because of what they add to each character's arc.

On another narrative note, I do want to mention one aspect of the casting decisions that led the narrative to have interesting idiosyncrasies. Despite the game taking place almost entirely in France during a time at which France was actively at war with England, all of the characters are voiced by English actors. While this is a fairly standard casting choice, especially for historical games, having French characters speaking about France's relations with England in English accents was absurdly comical and, for me at least, pulled me out of the story to some degree.

One of my favorite things about A Plague Tale: Requiem is that, while the story is fairly set, the way you grow and adapt in the game is largely up to you. For the majority of the game, you control Amicia, the 15-year-old sister of Hugo. Depending on how you dispatch enemies and work through puzzles, you can develop certain skills in Prudence, Aggressive, or Opportunism. Each one of these aspects gives you unique abilities that let you move more or less silently behind enemies or offer up deadly attacks.

It is incredibly difficult to level up all three skills, so depending on your play style, I'd recommend picking one route and approaching levels in a way that will give you points for that specific skill. On my playthrough, I went for Prudence and Opportunism. And by the end of the game, I could sneak pretty much anywhere (except for some late-game puzzles) undetected.

Verdict – A gorgeous world with some filler

Despite some of the pacing problems and balancing issues with late-game missions, at the end of the day, Requiem is still a really fun game. I finished it a little while ago and I still catch myself thinking about the world and the environment it created. If you're looking for a fast-paced adventure RPG, this probably isn't for you, but I definitely recommend it to anyone who wants to immerse themselves in a chilling tale about love, loyalty, and—most importantly—rats.

For more guides on A Plague Tale: Requiem, check out How to open the barred door in Chapter 11 of A Plague Tale Requiem on Pro Game Guides.