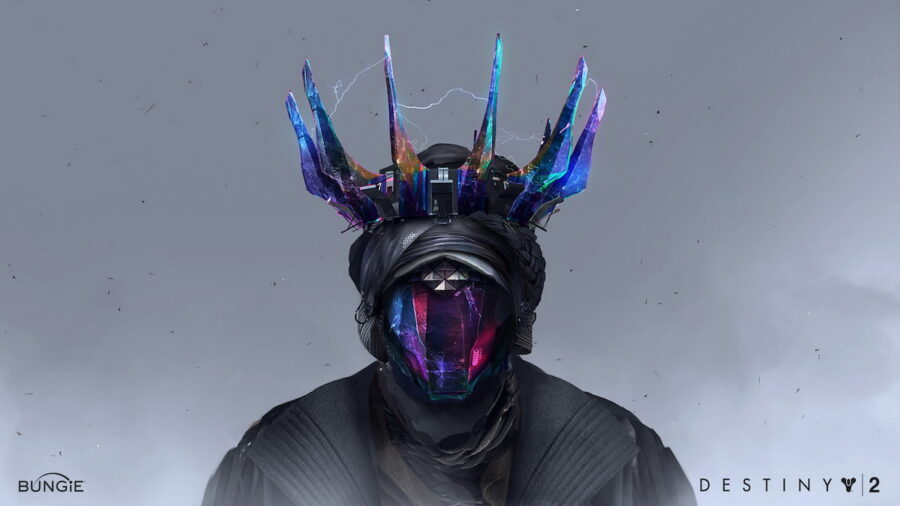 Out of all of Destiny 2's classes, Warlocks have arguably the best selection of Exotic helmets. These helmets are effective in battle and provide buffs to your fashion stats as well. As a Warlock, the list of Exotic helmets can be intimidating, but we're here to help you equip the perfect piece for your build. Here are all of the Warlock Exotic helmets, ranked.

Eye of Another World

Eye of Another World is Hunter's helmet Foetracer, but better. This helmet not only marks priority targets it also increases the regeneration speed of your grenade, melee, and Rift abilities. As if those advantages weren't enough, Eye of Another World also improves the airborne effectiveness of all weapons. This helmet is the actually good equivalent of 3-in-1 shampoo, where we can get the best of both worlds for the same price. We can't get enough of this helmet.

The Stag is perfect for newer players and players who simply don't enjoy getting hurt. This helmet causes your Rift to grant damage reduction to any allies standing in it. It also grants Rift energy when you are critically wounded and drops a healing rift on your corpse when you die. This helmet is great for players who provide value to their team, even through unconventional means. If you know you often die and still want to contribute to your allies, you should definitely try out The Stag.

Verity's Brow is optimized for Warlocks who love grenades. With this helmet, any elemental weapon final blows, as long as their element matches your subclass, grant a buff called Death Throes. This buff provides a grenade damage bonus, as well as granting you grenade energy. Whenever you have Death Throes and throw a grenade, allies gain greatly increased grenade regeneration for a short while. Verity's Brow is perfect for Warlocks who watch their cooldowns with anticipation, waiting for their next chance to launch a fireball at the enemy.

Apotheosis Veil is incredibly effective for Warlocks with a high Intellect stat. This helmet immediately regenerates health, melee, grenade, and Rift energy as soon as you activate your Super. Nearby allies also recharge class abilities faster. Apotheosis Veil is helpful not only for its user but for the teammates around them. This helmet can be deadly with an Intellect build, although it may not prove as effective for other stat builds.

Crown of Tempests is only beneficial for Warlocks using the Arc subclass and will not be helpful for another subclass. With this helmet, Arc ability kills increase the recharge rate of Arc abilities and extend the duration of Stormtrance. While this helmet's perk isn't groundbreaking, its bonus to Arc ability recharge is generally helpful. In its defense, the Crown of Tempests' design is incredibly striking and reminds us of the Crown of Madness DND spell.

Dawn Chorus is only useful for Solar Warlocks using the Daybreak Super ability and will not be helpful for other subclasses. With this helmet, your Daybreak projectiles cause targets to become scorched, dealing extra damage. Each time your scorch effect damages an opponent, you gain a small amount of melee energy. While this helmet does have a niche benefit, it is more helpful to equip an Exotic like Wings of Sacred Dawn to buff the Daybreak ability. The helmet is not ineffective, but other Exotics simply outperform it, leaving Dawn Chorus behind.

Skull of Dire Ahamkara is perfect for Nova Bomb users, although its benefits aren't anything to write home about. This helmet provides damage resistance during Nova Bomb and grants Super energy upon each Nova Bomb kill. This helmet is primarily useful in PvE activities since you can reliably secure kills. For Guardians who are not confident in their ability to kill opponents, the only effect this helmet provides is damage resistance during their Super, which makes its overall efficiency pretty lackluster.

This helmet is only effective for Warlocks who use the Blink movement ability. With Astrocyte Verse, you can Blink further and more frequently. After using Blink, your weapon readies more quickly, and your radar remains visible. The helmet also provides a moderate boost to the airborne effectiveness of all weapons. For the few numbers of Warlocks who swear by the Blink ability, this helmet is a godsend. However, its benefits are quite niche, and for most Warlocks, it is only used as a fashion accessory.

Nezarec's Sin is certainly a stylish helmet, but its effects are quite basic. With this helmet, Void damage kills increase the ability recharge rate. This helmet is primarily effective for Void subclass Warlocks who equip Void weapons. For other Warlocks, this helmet provides minimal benefits. While Nezarec's Sin isn't without benefits, it requires a highly coordinated build to remain useful.

While Felwinter's Helm does get points for looking like The Hunter from Bloodborne when viewed head-on, its perk is underwhelming. This helmet's powered melee final blows create a burst that weakens nearby targets. Finishers and final blows against powerful opponents increase the radius of the burst, as well as the length of the weakening effect.

As a solo player, this helmet does not seem as if it would provide any value. The best situation for this helmet is for the player to be in a raid defeating enemies alongside allies. Even then, this helmet is outperformed by other helmets and would simply take up space in the Exotic slot.

For more Destiny 2 guides, check out All new Destiny 2 Exotics in The Witch Queen & how to get them here on Pro Game Guides.