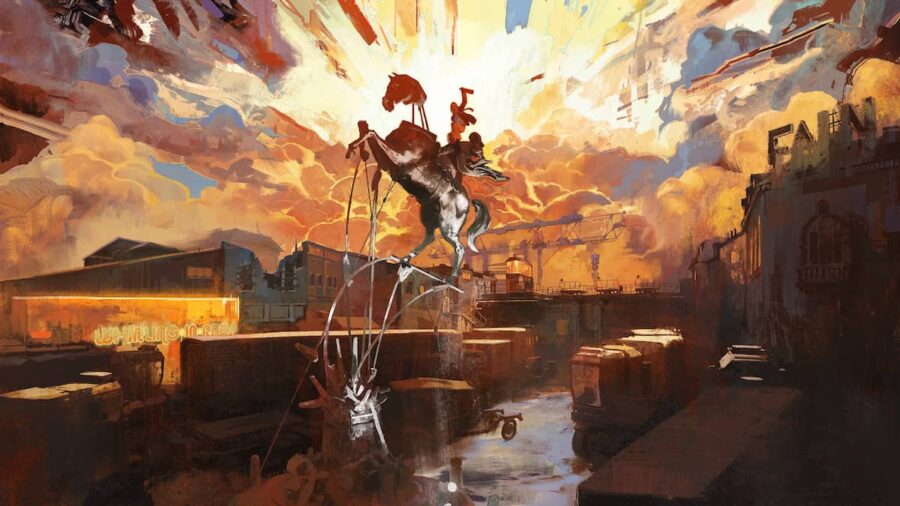 When the majority of your isola becomes surrounded by a phenomenon that swallows all matter, it can be alarming. The world of Disco Elysium is enduring this same problem: an encroaching substance that breaks down all fundaments of the known world, including language, numbers, and sound. The worst news for the citizens of this isola is that this substance, known as the pale, is expanding. Here's what we know about the pale in Disco Elysium.

The pale in Disco Elysium, explained

What is the pale?

The pale, as described by Joyce Messier in the game, is "the enemy of matter and life." It is "achromatic, odourless, featureless..." the "transition state of being into nothingness." The pale cannot be seen, heard, or measured. It is a singularity that swallows everything, from sound to land to concepts. Currently, it takes up 72% of the world's surface, although that number is steadily growing.

The people of Revachol refer to the pale as "the separative tissue between the isolas." It is the force that makes long-distance travel difficult, due to the harmful effects of the pale. The only way to cross this "separative tissue" is by aircraft, using a pale latitude compressor. This machine compresses the area between one location and another, forcing the pale to take shape and reducing the travelers' exposure to the phenomenon.

Is the pale harmful?

When humans are exposed to the pale, they endure several strange side effects. While short-term exposure results in a headache or minor discomfort, long-term exposure can be deadly. Almost every scout team charged with investigating the pale has either gone missing or lost their minds. An example of this loss of sanity is shown through the character Paledriver, whose occupation is navigating through the pale.

When Harry and Kim attempt to speak to this woman, she is listless and nonverbal. She seems to be caught in a waking dream, transfixed in a different reality altogether. Although she manages to muster up a few words, she always returns to that dissociated state.

There are several theories about why the pale is so disorienting to exposed individuals. Some people claim that the pale causes intense sensory deprivation, due to its absorption of matter. Others state that pale "somehow consists of past information, that's degrading. That it's rarefied past, not rarefied matter." According to this theory, exposed individuals re-experience the past, and not always their own.

The character Soona explains this phenomenon, claiming "you may hear snippets of someone else's conversation, or the voice of your former lover, or an echo of an event that took place 100 years ago." This overwhelming crash of information is disorienting, leaving victims lost in their own minds, wondering what's real. Joyce Messier describes the effects beautifully, saying "the human mind becomes over-radiated by past."

Harry and Kim experience the effects of the pale firsthand, via a pale latitude compressor. In one of the Final Cut version's quests, you endure the pain of a torture device constructed by Ruby, The Instigator. While the machine causes physical pain due to the noise, the types of sounds emitted by the compressor are fascinating. The Perception skill describes the experience as "a thousand radio stations being blasted into your head all at once."

These "radio stations" include snippets of songs, words in other languages, incessant numbers, and hissing noises. Their exposure only lasted for a minute or two, so it is understandable how exposure over years can steal a person's sanity.

How do you study the pale?

The study of the pale is collectively known as "Entroponetics." When asked how people measure a matterless phenomenon, Soona replies, "You measure it by its surroundings -- by that which does exist." This process is similar to how scientists study black holes. Since there is no light in a black hole, they study accretion disks, which are the gas and matter that surround the black hole, waiting to be sucked in.

The pale is increasingly difficult to study due to its tendency to swallow matter. As Joyce Messier describes, "The further into pale you travel, the steeper the degree of suspension. Right down to the mathematical -- numbers stop working. No one has yet passed the number barrier. It may be impossible." Calculations are futile when you are surrounded by condensed pale. Thus, scientists must study the pale from a distance in order to avoid this crumbling of mathematical logic.

In order to directly encounter the pale, interisolary travelers must adopt a psychological regimen that helps keep them sane. Although this regimen was first developed by the admiral who initially discovered the isola where Disco Elysium is set, the mental training soon spread to civilian travelers. To avoid intensive exposure to the pale, there are still laws restricting civilian pale transit to six days per year. However, those with intensive mental training who have been admitted into an "Entroponetic Business Class" are cleared for twenty-two days of annual pale transit.

How can the pale be transmitted?

The pale is primarily transmitted through pale latitude compressors, which despite their potential use as a torture device, are typically used to aid pale transit. These compressors emit strings of numbers on buoys across the pale region, all through a radio frequency. This forces dimension upon a state of non-dimension, "crunching" the distance between two points. This speeds up aircraft travel, although the journey is still far from instantaneous.

These transmitter buoys are manned by appointed workers, who work alone in the pale. These workers are known to lose their senses after only a few years of exposure. Similar to the Paledriver, it can be inferred that workers become aloof and dissociated from the present reality, consumed by over-radiation of the past.

According to a piece of Disco Elysium concept art, as seen overhead, it seems as if paleworkers wear specialized suits to reduce exposure. Along with mental protection from the pale, physical protection does not seem out of the realm of possibility. Even so, there have been no in-game lines that hint at the construction of these suits.

Are there other uses for the pale?

Other than reduced travel times, there is a book called Medicinal Purposes of the Pale that claims the pale can be used as a medical treatment. This book describes how to cure various illnesses and conditions through the use of pale, but it appears to be unfounded. On the immoral side of things, a pale latitude compressor can be used as a torture device, although this is not its creator's intention.

Has anyone seen the pale?

It may go unnoticed at first, but Disco Elysium's title screen depicts the pale encroaching upon Revachol. The swirling, almost ink-like waves over the city signify the pale, and how it is quickly growing. Although in-game characters have never seen the pale, players have witnessed it all along. In the top right corner, you can see an aircraft entering the isola, presumably having crossed the interisolary pale.

Along with Ruby's malicious pale latitude compressor, and the jarring colors used to demonstrate the character's pain, these two instances are the only visual depictions of the pale.

What is the pale in Disco Elysium?