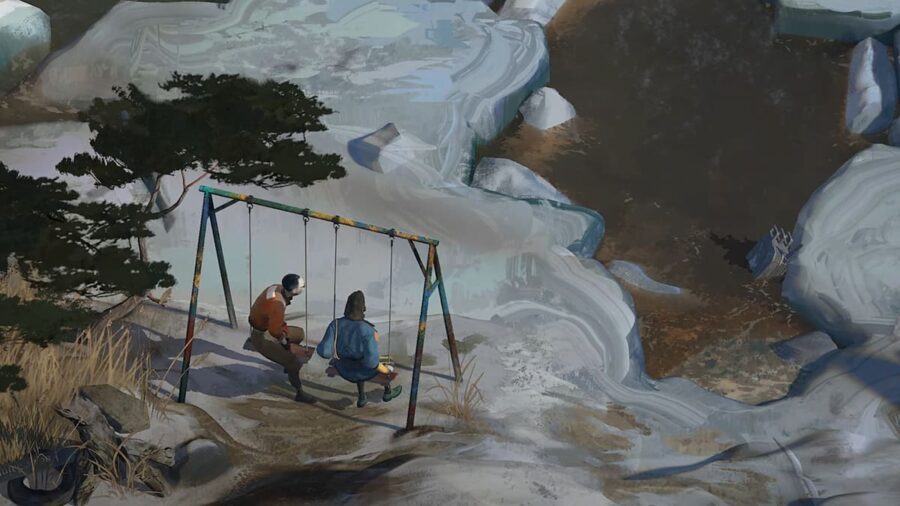 I have never been a cop. I have never experienced the pain of a divorce. I have not lost my memory. I am not Harry DuBois.

I, Britlee Kuhn, have almost nothing in common with Disco Elysium's protagonist, Harry DuBois. And yet, I hurt when he hurts. When the apricot-scented ghost of his ex-something haunts him in his dreams, my heart wrenches. At the disappointed glance of his detective partner, I, too, wince. Despite our disparate lives, there is one thing that connects us, one detail that justifies the pain I feel on his behalf: we are both human.

Disco Elysium taught me a level of empathy that is hard to explain. Nobody is blindly demonized in the game's narrative, even those who have done horrible things. Unlike many traditional games, there are no villains in Disco Elysium. There are only broken people. Hurting people. People who are running for their lives from a past that seeks to swallow them whole. Nobody is beyond redemption in Disco Elysium, which is good news for Harry, because if redemption was achieved by good deeds, Harry would be the first in Hell.

It's hard to overstate Harry's brokenness. He is an alcoholic man plagued by drug addiction, who wakes up in the dead-end town of Martinaise. He is infamous in the region of Revachol for waving around a loaded gun and gesturing about taking his own life. He is not doing well.

And yet, Disco Elysium doesn't write Harry off as a lost cause. It doesn't leave him to rot in his hotel room of self-destruction, soaked in alcohol and bad decisions. It doesn't abandon him, claiming that he 'made his choice' and deserves his condemnation. As the player, neither do you. Instead, you accompany Harry in the depths of his despair, pulling him out of his pool of self-hatred.

This extended hand of empathy is not only offered to Harry; it is universal. The vulgar group of vigilantes that threaten Harry are given the chance to speak, to explain their motives with an agreement of mutual respect. The woman who vandalizes Martinaise property is allowed to state her reason for creating illegal art. Everyone is worth listening to, even if they have different ideologies.

This philosophy changed the way I thought about people. While there may be a lot of barriers that prevent me from understanding others, such as upbringing, beliefs, and stereotypes I mistakenly place on them, every person I meet is human. Before they are an age, a work position, or a member of a community, they are human. Even if we can't agree on anything else, we can connect via the raw emotions that we all feel.

Since Disco Elysium relates to Harry on a basis of who he is, instead of what he has done, he can change into a better person. Throughout the game, Harry improves his relationship with others and becomes someone who is not defined by his mistakes. He forges a friendship with his detective partner Kim Kitsuragi, who once felt like a babysitter, but now feels like an actual friend. By the end of the game, you know Kim has your back. You can rely on him.

The friendship between Kim and Harry is so hopeful. It is concrete proof that Harry is growing and maturing, as he's able to sustain a peer relationship. There are little moments that show this friendship, like a subtle smile that only Harry can see, or how Kim nurses him back to health when he's been wounded. It's a pure friendship, one that doesn't have to exist, but does.

In all honesty, I believe it's one of the reasons why Harry stays sane. After completing Disco Elysium and achieving the "good ending," I've thought about doing a playthrough where I do the exact opposite. In that playthrough, I would create chaos and destruction wherever I go, claiming that "violence is a question, and the answer is yes!" The juxtaposition is tempting.

And yet, I don't think I could do it. I genuinely don't think I could betray the characters I've carefully forged a bond with. I've taken the time to get to know the characters, learning that Kim hates pinball but is eerily good at it, Cuno is a product of his home life, and Garte is just afraid of losing the establishment he loves. They are more than one-dimensional pawns used to progress the story; they are people. I don't want to hurt these people. They've suffered enough.

I don't know which member of ZA/UM I need to personally thank, but the characters are so well-written I would believe you if you told me they were real. I've never seen this type of writing before, the kind that changes you. That makes you kinder. I feel more open to approaching conflicts with empathy, attempting to understand why people do the things they do. Disco Elysium helped me realize that people are confusing, but they are genuine. Even the worst people believe they are right.

After a game like Disco Elysium, I feel slightly empty. It feels like the entire game was a personal, thoughtful lesson and now it's over. But, I believe that's okay. I've been helping Harry endure his own struggles, and make friends, and resolve conflicts with mutual respect. I've helped him live.

For more gaming features, come check out Destiny 2’s next raid releases on a Friday, and the community is not happy here on Pro Game Guides.

Disco Elysium taught me how to live