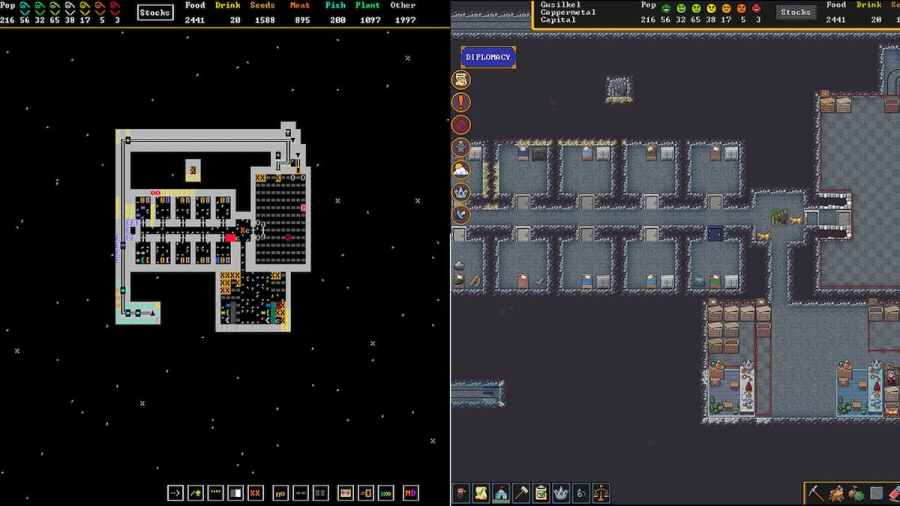 Dwarf Fortress Premium, which recently got its release on Steam and Itch.io, has quickly gotten back to its roots with the release of a new togglable setting that changes it back to ASCII graphics. The recent patch was released on December 22, giving us another graphical option (as announced on Twitter), some new info about the Dwarf Fortress Team, and some quality-of-life changes.

To toggle to classic ASCII settings, just head to the settings and, under graphics, select the Use Classic ASCII Glyphs option, toggling it to Yes. This will bring you back to the classic good-old days of ASCII symbols and not really knowing what anything was. This is a great little nostalgic feature for older fans, but it might not get much traction with newer players.

Related: How to make a temple in Dwarf Fortress

However, the setting also gives us a preview of just how the updated Classic version of the game might play. The Classic, free version of Dwarf Fortress is scheduled for an update in the new year, and this graphics option feels like a preview of what to expect.

Besides the graphic update, the patch added Steam Trading Cards, some new symbols, additional graphical elements, and some updates to music. Full details can be found in the patch notes.

These also include some updates about the team working on Dwarf Fortress, with the announcement of two new team members. Putnam, a community mod creator originally responsible for the game’s long-running Dragon Ball Z mod, will become the first programmer outside of Tarn and Zach Adams to lay eyes on the game’s tightly guarded code. Content creator SalfordSal is also joining the team as a community support member who will help with Discord and host streams.

Overall, it's a great update to end the first few months of Dwarf Fortress’ release. The timeless game is finally getting the larger recognition it deserves, and with that comes new patches, new team members, and even more dwarf shenanigans!