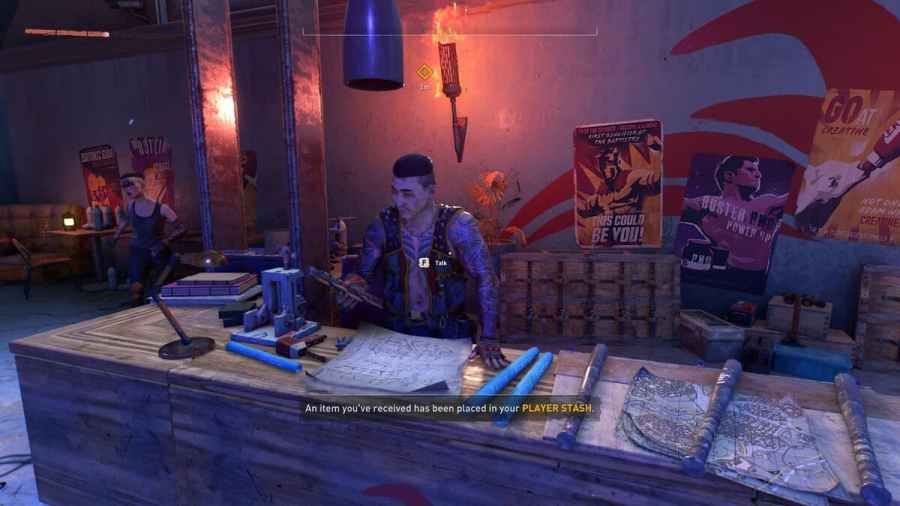 The yellow quest marker is also where you can find the Quarry End Swimming Pool Landmark, also referred to as the Baptistery by various NPCs. You will need to bang on a blue door to begin a cutscene with an angry door guard at this location. But to get past the guard at the blue door, you must have a password. However, you don't know the password, so let the cutscene play. If you let the cutscene play, another NPC will appear, and they will steal your money.

When the NPC steals all of your money, you must chase them on rooftops, similar to other chase quests in the game. If you don't want to waste time chasing them down, just head to the location shown in the image below where the chase ends.

Related: Where to find all GRE Anomaly locations in Dying Light 2

How to complete the Bloody Ties First Blood quest

First Blood is an Easy quest to complete once you finish the first cutscene. In short, heading to the above location will take you to an abandoned building where the thief who took your money went. Head inside the building via an entrance on the street level. When entering the abandoned building, you must go to the second floor and look for the crawlway shown below at the top of the stairs.

Heading through the crawlway leads to another room where you must open the set of doors shown below to progress the quest. After enting through the doors, you will confront the thief and later complete the quest by heading back to the Quarry End Swimming Pool landmark.

Eventually, after returning to the Quarry End Swimming Pool landmark, you must need fight through one wave of human NPCs using only a basic baseball bat. To win the first wave, we recommend focusing on NPCs fighting other NPCs and utilizing both combat parkour skills and mobility to slowly pick off one NPC by one. After this fight, you will need to fight a wave of infected; just use the same tactics as when fighting the previous human NPCs. The second fight is also easier as you will have the help of friendly NPCs. However, if you are struggling with either fight, we recommend making the following preparations before starting the First Blood quest in Dying Light 2:

How to prepare for the Dying Light 2 Bloody Ties DLC

If you are just starting the Dying Light 2 Bloody Ties DLC, then we recommend following these tips for preparing for the new storyline DLC:

Overall, you won't run into anything unexpected in the Bloody Ties DLC, so as long as you are properly equipped with decent leveled items and have plenty of health items, you should be fine.

For more on Dying Light 2, we at Pro Game Guides have you covered with the following guides: Where to find all Crafting Parts in Dying Light 2 and Dying Light 2 Bloody Summer Event is Live – How to earn Seasonal Rewards.