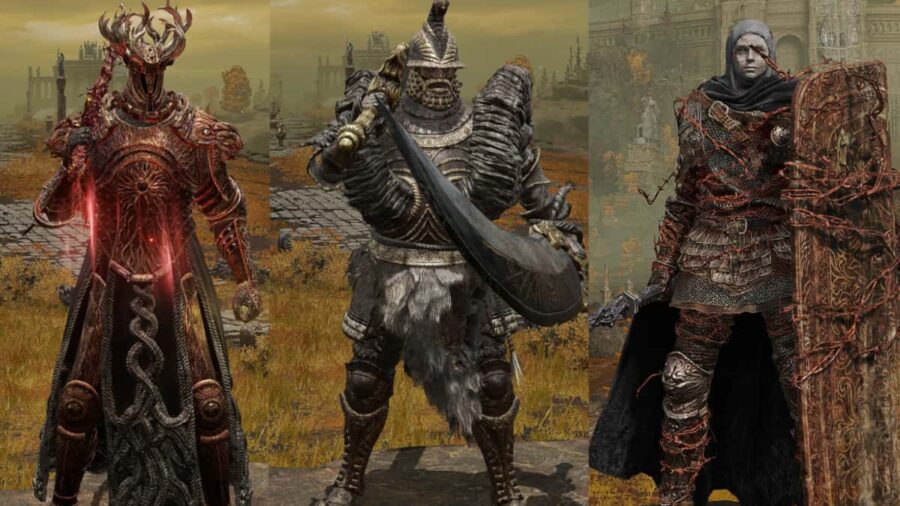 Elden Ring has many potential weapons, spells, and skills to use. It can be hard to choose an effective and fun build to play. Here is a list of the best Strength builds to try.

The Sacred Shield build focuses on Mohgwyn's Sacred Spear and the unique Bloodboon Ritual skill. This weapon does physical and fire damage and causes blood loss buildup. The White Mask will further increase your damage when blood loss is applied. This build also uses the Flame, Grant Me Strength incantation as it buffs physical and fire damage which are the two main damage types of this weapon. You will primarily attack while holding your shield up—as Mohgwyn's Sacred Spear is a piercing weapon, you can attack while still holding your guard. Bloodboon Ritual is a massive AOE attack that causes explosions of blood. Carian Filigreed Crest reduces the cost of the Bloodboon Ritual skill, while the Shard of Alexander talisman increases its damage.

The Starscourge Build uses the unique, Starscourge Greatsword. This greatsword can be two-handed to wield two of them, with unique light and heavy attack combos. This weapon does physical and magic damage. The Claw Talisman will further increase your damage when jump attacking. This build also uses the Starcaller Cry to pull enemies towards you in a gravitational wave, this can then be followed up with an additional ground slam attack. Carian Filigreed Crest reduces the cost of the Starcaller Cry skill, while Shard of Alexander talisman increases its damage.

The Blasphemous Beast Build is a hybrid Strength and Faith Build. This build uses the Blasphemous Blade which does physical and fire damage, while also restoring health when enemies are killed. The Taker's Flames skill raises the sacred sword above your head to set fire to a line in front of you, also restoring your HP on enemy hit. This build also uses the Clawmark Seal, which is a Faith and Strength scaling seal. Flame, Grant Me Strength, and Golden Vow are used to buff your overall damage, while Stone of Gurranq, Beast Claw & Bestial Sling are alternative ranged attack options.