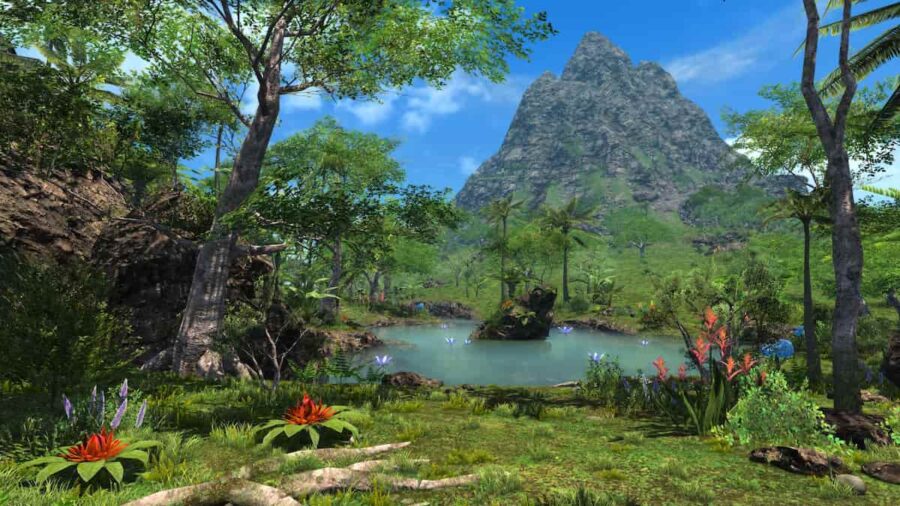 The Island Sanctuary is one of the most anticipated features ever in Final Fantasy XIV. A chance to relax, take a break from saving the world, and enjoy the simpler things, like farming, collecting minions, etc. All on your very own tropical island retreat. Naturally, players have been pining for this addition for months. And that’s why fans were delighted by the recent release of several new images of the Island Sanctuary.

It started on August 3, as the official Final Fantasy XIV English Language Twitter asked an innocuous question: “If you could only bring one minion with you to your Island Sanctuary which would it be, and why?” Those who have been following the details of the Island Sanctuary will know that the feature will seemingly allow you to release your favorite minions to roam your island freely.

The post also added an expanded version of a previously shown artwork of the Island Sanctuary. This image clearly showed a player avatar surrounded by their Minions.

But the teasing wasn’t over there. August 4 kicked off with Square Enix releasing a pair of new Island Sanctuary teaser images on the 6.2 patch official site. The images were also posted to social media.

The Tweets garnered thousands of likes and hundreds of comments, with almost universally positive praise. And what's not to be pleased about? These images offer perhaps the most comprehensive view of what the environment of the Island Sanctuary will look like. It’s clearly a tropical place ripe for relaxation and enjoyment. Patch 6.2 releases later this month. But until then, players will be sated by the preview of some of the most compelling content to be added to Final Fantasy XIV in months.