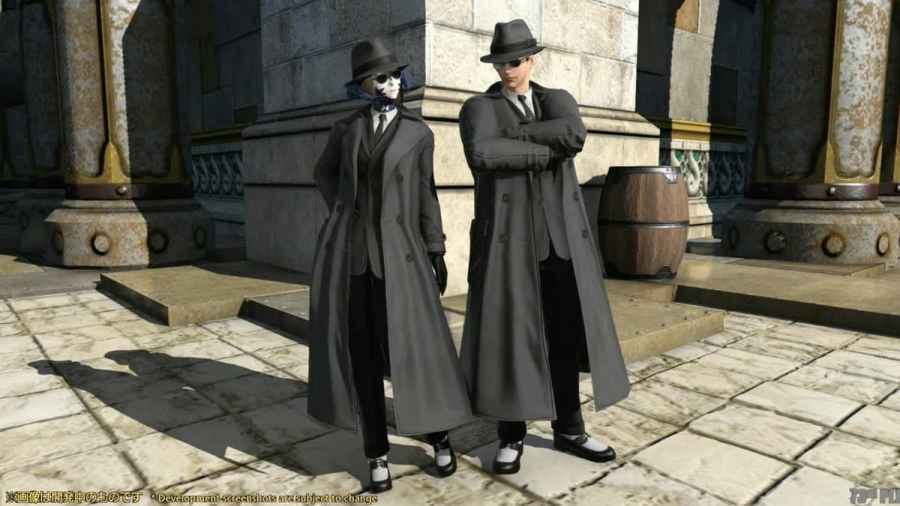 On October 8, the 14-hour Final Fantasy XIV live stream from Square Enix revealed a number of new details about the upcoming 6.25 patch. One of these details was the inclusion of a new glamour set for the game with a spy-like theme.

The noir-style gear sees the Warrior of Light dress up in the iconic Burberry-style macintosh, or trench coat of spies and detectives, coupled with a fedora, black shades, suit, and two-tone spectator shoes. Keen-eyed fans have already dubbed this the Spy x Family Glamour as the outfit bears resemblance to clothes worn by Loid Forger in the anime.

What’s more, FFXIV director and producer Naoki Yoshida also may have implied that this glamour was inspired by the series. Yoshida apparently stated “Oh, it looks like a spy theme. And isn’t that Spy x Family anime popular these days?”

Global Community Producer, Toshio Murouchi, better known as Foxclon, stated that this spy-themed gear was available from one of the new dungeons in patch 6.25. However, we currently don’t know if that means the new Criterion dungeons, or the Variant dungeons. Either way, it is somehow tied to these new harder dungeon types.

Overall, that’s about all we know about this cool new outfit, as we don’t have a name or an exact unlock method just yet. But still, there’s already buzz in the FFXIV glamour community about this gear, and many are excited to get this unique set of items for their glamour collection.

For more FFXIV guides, info, and news, check out How to get the Wind-Up Ragnarok minion in Final Fantasy XIV on Pro Game Guides.

You’ll be able to unlock a spy-themed glamour in FFXIV patch 6.25