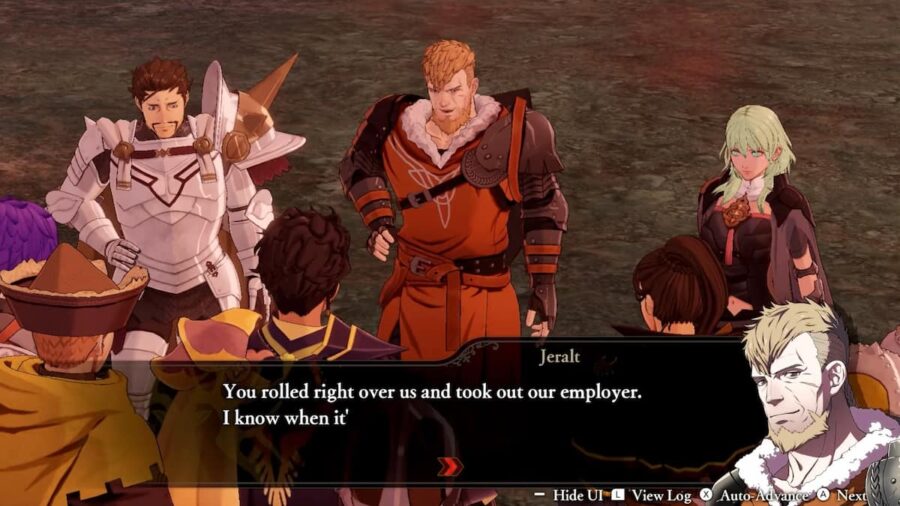 How to get Byleth on the Golden Wildfire route in Fire Emblem Warriors: Three Hopes

How to recruit Byleth and Jeralt for the Golden Deers

In this mission, you have to escort Claude across the map to meet Byleth, then retreat to where you started. Play the mission and complete all side quests until the main mission says "Avoid engaging Byleth and help Claude retreat safely."

Follow this next instruction exactly: A side mission will appear not long after this main mission starts when Arvalls tells you to Face and defeat Byleth. Ignore this. If you defeat Byleth, you have lost your one chance to recruit Byleth and Jeralt.

Before you reach the mission's starting point with your House leader, you want to place a very powerful unit of yours in the top left corner—in the red box as shown in the image below.

You do this because when you get back to the start, a new unit appears in the top-left corner, and you have to race Byleth up there to defeat this new foe. But we planned ahead—switch back to your placed unit, defeat the enemy, and Jeralt's Mercenaries will surrender. You'll then get both Byleth and Jeralt as recruits. They are both mighty fighters and will fit perfectly into your team.

How to get Byleth on the Scarlet Blaze route Fire Emblem Warriors: Three Hopes

How to recruit Byleth and Jeralt for the Black Eagles

You need two strategies from the Strategies menu, Resonant Lightning and False Rumors; this costs 40 Strategic Resources. Resonant Lighting is acquired in Menja Territory from a survey spot. Ensure you have these two selected. If you do not choose either of these two, you will lose acquiring the pair.

Attack using Powerful lightning magic. This strategy will significantly turn the tide of the battle.

In the battle, follow the main mission and seize the strongholds around Mateus. Then a side mission will begin not long after to Aid all of the Sorcery Engineers! This must be completed before anything else. Finishing this will start the Resonant Lightning strategy and begin the lightning bombardment.

Wait for the bridge to be built to the eastern shoal and head towards Alois and Rodrigue. Byleth attempts to return, but the bridge is destroyed. Don't listen to Arval and kill the Ashen Demon. Instead, kill Alois and Rodrigue as fast as possible. In doing so, you'll have recruited Byleth and Jeralt.

How to get Byleth on the Azure Gleam route in Fire Emblem Warriors: Three Hopes

How to recruit Byleth and Jeralt for the Blue Lions

It's best to have two strategies selected from the Strategies menu, Locate Ambushers and False Rumors. In total, this costs 40 Strategic Resources. Iron Clad Defense may help if you have the extra 20 resources.

First, you must prevent the mercenary raider's attempt to infiltrate the Allied Base, then go and defeat Fleche. Afterward, Randolph will appear on the battlefield, but so will the Ashen Demon, albeit in a different location. You must defeat Randolph before Byleth reaches him.

Ignore Arval's side mission to defeat Byleth, as this will kill her, and you will lose your opportunity to recruit them both.

If you succeeded in defeating Randolph, you will have ended the mission and recruited the duo.

How to recruit Jeralt in Fire Emblem Warriors: Three Hopes

To recruit Jeralt is very simple. No matter what path you take, Golden Wildfire, Scarlet Blaze, or Azure Gleam, you will always get Jeralt if you recruit Byleth. They come as a pair essentially, so you can't miss out on Jeralt if you get Byleth.

Byleth starts with the Silverheart class, and they are easily one of the best characters you get to play as in the game. Here are the abilities you'll have as a Silverheart:

Jeralt starts as the Holy Knight class and may not be as good as Byleth but is still a powerhouse of a character. Here are the abilities of Jeralt:

How to recruit Byleth/Jeralt in Fire Emblem Warriors Three Hopes