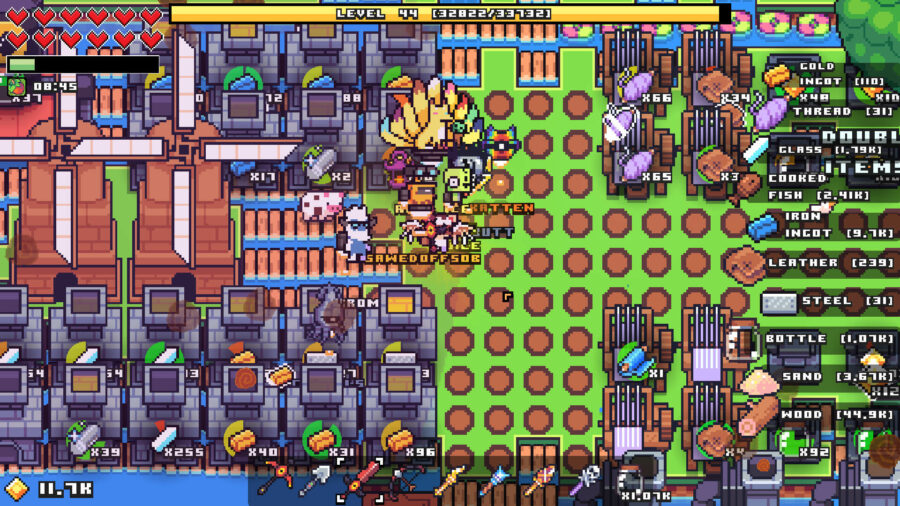 Golden Eggs are required for certain a quest in Forager, so here's how to get them and how to increase their drop rates.

How to get Golden Eggs from Chickens in Forager

To get golden eggs, you will need to have chickens as the golden eggs are a rare item that chickens only drop. Luckily, there are a few methods in which you can increase the rate that these golden eggs drop in Forager.

To start, we recommend making and drinking a liquid luck potion as it will give you a buff that will increase the chances for rare items such as golden eggs to drop. To make a liquid potion you will need a cauldron and the following materials.

You can also try obtaining the pink bow, which will increase the number of resources that drop from animals by 25 percent; you can get the bow as a reward for completing the Desert Princess quest.

Next, you should make animal feed with the following resources listed below and feed it to your chickens as it increases the chances for rare items to drop.

Along with making animal feed, you should invest in building a shrine as these structures can give certain buffs. One such buff is called hoarder, and it causes extra items to drop, which in turn can potentially cause chickens to lay more golden eggs.

That said, you can make a shrine with the following resources.

Once you get a golden egg or two, you can then use them to make a demon wallet that will make coins worth 125 percent more or use it to complete the Old man's quest to reward you with a big chest.

For more on Forager, we at PGG have you covered with guides like How to get Saplings in Forager and Forager How-to Get Bones, Sand, Poop, and Oil

How to solve the Rainbow Puzzle in Forager

How to make Leather in Forager

How to get Paper in Forager

How to Solve the Skull Maze in Forager | Map, Chests, and Braziers Guide

How to Solve the Ancient Tomb Puzzle in Forager

How to Solve the Desert Biome Eye Statue Puzzle in Forager