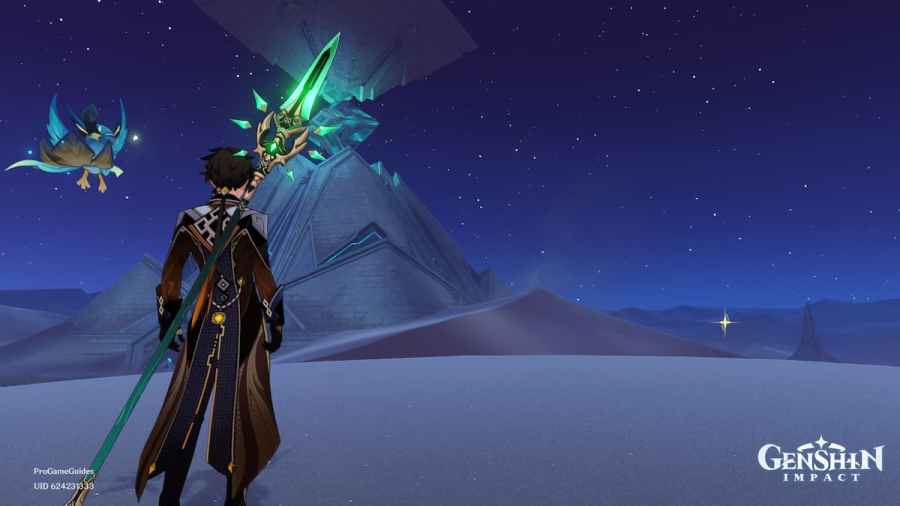 Genshin Impact had only one polearm user present in the game on release, Xiangling. Since then, however, several more have been added, including two Archons. If you want to know which weapons to outfit these characters with, here's our list of the best polearms in Genshin Impact and how to get them.

While they may only be three-star weapons, Black Tassel and White Tassel are handy weapons.

Black Tassel is notable for its HP Substat. It's a great budget option for characters that scale with max HP, such as Zhongli, Thoma, or Candace. Unfortunately, its weapon skill is almost entirely a waste. It only applies to slime enemies, so while this weapon will boost its users support capabilities, it generally comes at a DPS loss. Black Tassel is easily obtained via any Wish Banner. You don't get much benefit from its weapon skill, so while you can get it to max refinement easily, you generally don't even need to do that for this polearm to work well.

White Tassel is a more damage-oriented weapon. Its Crit Rate substat is a nice boost, and its weapon skill, Sharp, will boost normal attack damage by up to 48% at max refinement. Given that polearm users are generally the fastest attackers in the game, this can significantly boost the damage of characters that like to use their normal attacks, like Cyno. You will need to put in a little bit of effort to get this weapon. It's only found randomly in chests scattered around Liyue. So if you do find one, save it. Using them as ascension materials could hinder your ability to reach max refinement.

While not a damage-dealing weapon, the Favonius Lance is a great weapon for support Polearm characters such as Thoma, Yun Jin, or Candace. The Energy Recharge substat is particularly useful for characters that boost party damage via their Elemental Burst. Its weapon skill also has a chance at providing even more elemental particles with Critical hits.

While it's not as commonly obtained, the Favonius Lance can be rolled for passively from any Wish Banner, meaning most players will eventually have at least one or two copies of this weapon after playing for a few months.

"The Catch" is currently the best four-star, damage-dealing polearm in the game, particularly for characters that rely on their Elemental Burst, such as Xiangling or Raiden Shogun. While its substat only boosts Energy Recharge, its weapon skill, Shanty, puts the increased Elemental Burst uptime to good use. It boosts both the Crit Rate and Crit Damage of the equipping character's Elemental Burst.

It's also an easy weapon to reach max refinement level with. While it was introduced as an Event Reward, "The Catch" and its refinement materials are permanently available at Inazuma's Fishing Association. Catch enough of the required fishes, and you'll gain this trusty weapon as a reward.

The Primordial Jade Winged Spear is the best-in-slot weapon for Xiao, and remains a solid weapon for DPS damage in general. It provides a moderate boost to Crit Rate via its substat, and its weapon skill, Eagle Spear of Justice, provides a hefty boost to Attack. This bonus can stack on hit up to seven times. Plan to use the equipping character as an on-field Main DPS to get the most out of this weapon.

It is a five-star weapon, so obtaining it can be lucky or pricy, depending on how you play. However, it is slightly easier to obtain than other five-star polearms, as it can be obtained (though very rarely) via the Standard Banner. It has occasionally been featured on the Weapon Event Wish banner. If you're looking for it in the future, the highest chances of it being featured would be alongside a Xiao Character Event Wish re-run.

Related: Where to find the Whopperflower in the Genshin Impact When Flowers Bloom Commission

Raiden Shogun's signature weapon, Engulfing Lightning, is a powerful weapon for her and Xiangling. It's very similar to "The Catch," sharing its Energy Recharge substat. What makes this five-star weapon really shine is its weapon skill, Timeless Dream: Eternal Stove. It converts all of the equipping character's extra Energy Recharge into extra Attack, up to 80% at Refinement Rank one and a whopping 120% attack at Refinement Rank five.

This is a difficult (or expensive) weapon to obtain, as it can only be obtained when featured on the Weapon Event Wish banner. It will most likely be featured alongside Raiden Shogun whenever she is featured on a Character Event Wish re-run.

While the Staff of Homa performs slightly worse than Engulfing Lightning on the Raiden Shogun, for most other DPS characters, like Hu Tao, using this polearm is a no-brainer. It's currently the only five-star polearm with a Crit Damage substat. Its weapon skill, Reckless Cinnabar, boosts HP, then significantly boosts Attack based on the equipping characters max and current HP. It's usable for many DPS characters, even if they don't scale on HP. If you do happen to obtain more than one copy, we recommend that you don't refine this weapon and instead give it to two different characters.

Like Engulfing Lightning, this weapon is not easy to obtain. It is only available when it is featured on the Weapon Event Wish Banner. Since the Staff of Homa was originally designed for Hu Tao, it will most likely be featured when Hu Tao has a Character Event Wish re-run.

Best Polearms in Genshin Impact, Ranked (and how to get them)