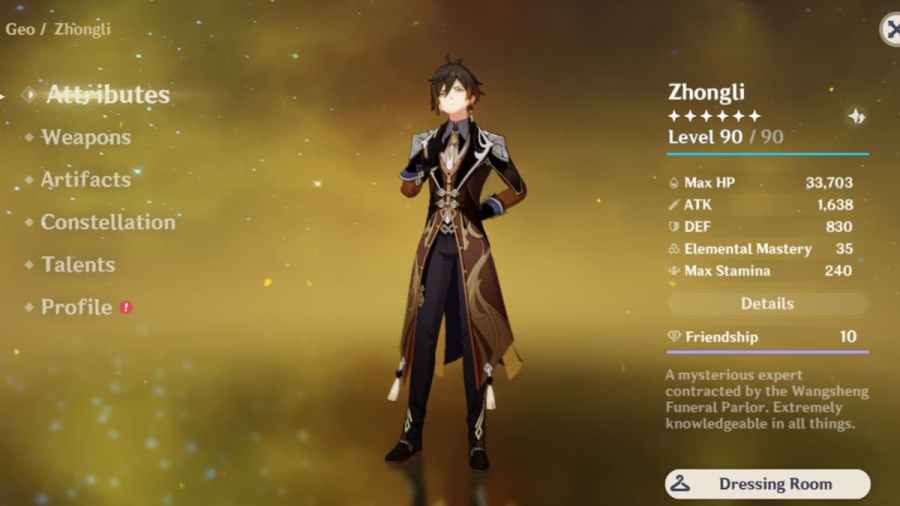 There are quite a few character types in Genshin Impact that are essential to your team. One of these is a shield user who can protect your team from damage. Zhongli is one of the best characters for negating damage in the game, especially when you use the right build. So use this guide for information on the best Zhongli build for weapons, artifacts, and more in Genshin Impact.

Zhongli is the Geo Archon and a polearm user who is a great support unit for your team. He is able to erect a pillar that pulses Geo damage while simultaneously casting a shield that protects the on-field character. To get the full effects of his shield, you'll need to raise Zhongli's HP in your build.

While you could use Retracing Bolide, the four piece Tenacity of the Millelith Artifact set was designed for Zhongli to emphasize his elemental skill and shield. HP is obviously important to this build and should be prioritized as a main stat and sub-stat. Once you've reached 30,000+ HP, however, your shield will scale high enough to take a hit from just about anything, so feel free to use a Geo damage goblet or CRIT rate circlet if you've already reached that threshold with your weapon, flower, feather, and sands.

Zhongli can use five-star weapons like the Primordial Jade Winged Spear or the Vortex Vanquisher (his unique five-star weapon), but it doesn't feel like a five-star weapon is necessary for building him. One of the best weapons for a support Zhongli is the three-star Black Tassel, because it further increases Zhongli's HP. This allows you to use other artifacts that boost his damage or send his HP through the roof, your choice.

What you need to Ascend Zhongli in Genshin Impact

Zhongli is an excellent choice for any main DPS character that needs a strong shield. Think Hu Tao, Yoimiya, or Arataki Itto. He'll do an even better job of supporting your main DPS if you also include Geo sub DPS or support characters in your team: Albedo, Ningguang, and Gorou are all good choices for this.