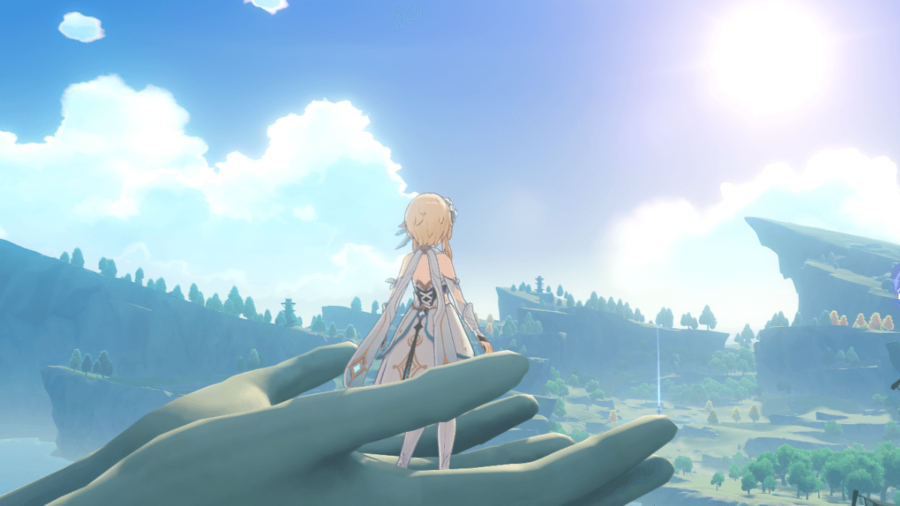 "Mimi Tomo" is the latest event to hit Genshin Impact, bringing us back to the theme of Hilichurl communication efforts. Ella Musk, the young languages expert, returns once again to aid in our current investigation into the Unusual Hilichurl sightings. In this guide, we'll provide an overview of "Mimi Tomo" and demonstrate how to complete the daily investigations so you can max out your total rewards.

What is Mimi Tomo?

There are seven Sighting Locations total that must be investigated. Each investigation location unlocks daily.

After teaming up with Ella, you'll be directed to a Hilichurl who is willing to communicate with you. This Hilichurl is standing alone on the cliff that is directly above Midsummer Courtyard. The Hilichurl explains that he is hungry and will request "Mita movo lata," which translates to "meat in the water." Give the Hilichurl a fish, and he will happily point the way to another Hilichurl with more information.

The second Hilichurl you need to speak with is underneath a shady tree, just off the main road in Guili Plains. This one will ask that you defeat a gang of Treasure Hoarders before giving you the time ("Unta nunu," or late night) and location of the first Unusual Hilichurl encounter. Turn your clock past 00:00 and fast travel to the Windrise Statue of the Seven to defeat the Unusual Hilichurl.

The first Hilichurl you'll speak with today has been bullied, and wants your help in seeking revenge (no, really). Fight off two very rude Geovishaps, and prepare yourself for a much larger version of this foe to come charging after you next. Report back to the bullied Hilichurl to get the location of its better-informed counterpart.

Follow your map marker to the next Hilichurl in Fadaupa Gorge. This one will also request that you fight off some Treasure Hoarders before giving you the time at which you can find the Unusual Hilichurl: "Unta mosi dada." This translates to "the wonderful time from lunch till just before sunset," so travel to the clifftop indicated on your map and turn your clock to somewhere between 12:00 and 18:00.

The first Hilichurl you'll need to speak with is on the edge of the cliff at Stormbearer Mountains. Fight off some enemies (multiple Abyss Mages and a handful of Electro-wielding Hilichurls) and return to the first Hilichurl for your next directions.

The second Hilichurl, found dancing on a cliff in Liyue, requests "Celi lata," which translates to objects that give off light or heat—like stars, the moon, and fireflies. If you already have the Luminescent Spines obtained from catching fireflies in your bag, hand one over to this Hilichurl. If not, take a look at our guide on how to get Luminescent Spines.

As thanks, the Hilichurl gives you the time for the next Unusual Hilichurl sighting: "Unta nunu," or late night. Travel back to Stormbearer Mountains as indicated on your map and turn your clock past 00:00.

Speak with the first Hilichurl in Bishui Plain, just southwest of Qingce Village. This Restless Hilichurl wants "gusha celi boya," which roughly translates to "red fruit or vegetable." You can give him anything in your bag that meets this requirement, like a Tomato or a Jueyun Chili.

The second, Pensive Hilichurl is west of the Wolvendom teleport waypoint. Pensive Hilichurl requests "lata boya sada"—if "lata boya" means blue and "sada" means solid or hard, you can gift this Hilichurl anything from your bag that is blue and sturdy. We went with Starconch, but you can also hand over Starsilver, Magical Crystal Chunk, or Loach Pearl (which we don't recommend due to its rarity).

The time you'll get for today's Unusual Hilichurl encounter is "unta mosi dada," or late afternoon, so travel to the spot indicated on your map and turn your clock to somewhere between 12:00 and 18:00.

Diligent Hilichurl, who can be found standing in the water of the quest area, requests "kucha gusha," which translates to "seed." Give Diligent Hilichurl an Almond like we did, or a Dandelion seed will work just fine.

Skeptical Hilichurl near the top of Cape Oath wants "Upano," which is noted in the language handbook as being a confusing term. The word "Upano" relates to air and objects in flight, so it's safe to assume that anything in your bag that once flew is desirable to Skeptical Hilichurl (we went with Butterfly Wings).

Find Curious Hilichurl at a halfway point between Dunyu Ruins and Tianqui Valley. Curious Hilichurl really wants to make friends with you, but asks that first you defeat a challenging enemy nearby: multiple, actually, in the form of Fatui Harbingers (get your elemental reactions ready!).

Afterwards, you will get "Unta mosi dada" (late afternoon, 12:00-18:00) as the time directive for today's Unusual Hilichurl sighting.

Next, you'll speak to Perplexed Hilichurl just north of the Dragonspine region. After you defeat a crowd of Fatui Harbingers, you'll be given "Aba mosi dada" (from waking until lunch) for today's Unusual Hilichurl encounter. Go to the area marked on your map and turn your clock somewhere between 06:00 - 12:00.