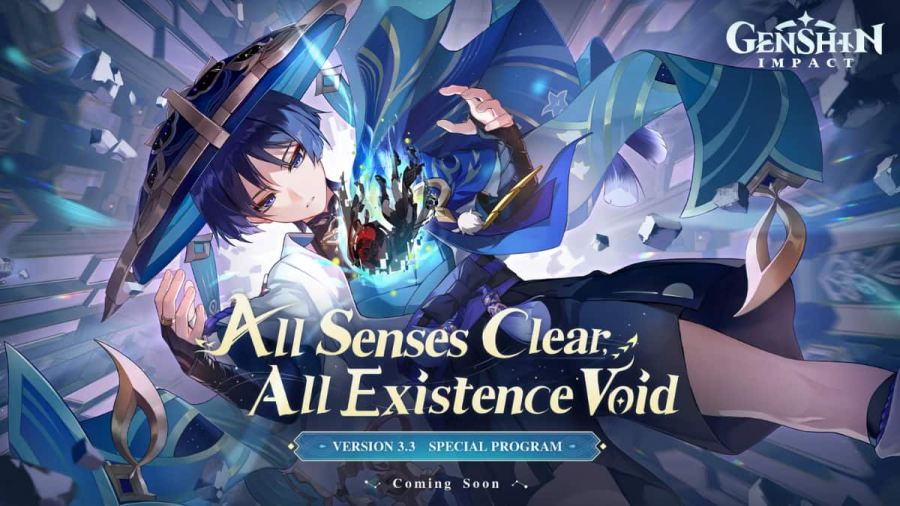 Genshin Impact's Version 3.3 update called All Senses Clear, All Existence Void is expected to release on December 7, 2022. It will continue from the events following the Akasha Terminal's dissolution, focusing on Scaramouche, whose identity has been renewed to "Wanderer."

Alongside the release of exciting new characters Wanderer and Faruzan, you can also participate in an interesting lineup of events. Read on to get excited for what's to come.

Akitsu Kimodameshi is Version 3.3's star event, featuring an event hosted by the Yashiro Commission. You can initiate Akitsu Yuugei challenges, akin to 3D versions of bubble shooting games like Luxor. You can control a bar to shoot an Elemental ball and use it to break 3D tiles on the opposite side. The catch is that these Elemental balls can trigger Elemental Reactions, so you can use plenty of combinations to cheese your way through the challenges.

The Element of the ball depends on the character you're using, and buffs can be selected to help you complete challenges. The challenges are Co-op friendly and will reward you with an event-exclusive sword called the Toukabou Shigure.

Across the Wilderness (parkour event)

This Co-op friendly parkour event will scatter Wilderness Balloons all over the event map. You can use wind currents and your character's skills and Talents to collect as many Balloons as possible within a time limit. Additionally, you can use a Wilderness Compass to configure your characters' skills. You can set a maximum of one buff per challenge, such as increasing their jumping ability, unlimited Stamina, and more. There are five different challenges set all over Teyvat, so you need to consider the terrain to collect as many Wilderness Balloons as possible.

This is a rerun of the Windtrace event, which has been released two other times before. This event can only be played in Co-op, where you'll be matched with a team of one Hunter and three Rebels. The Hunter must search for all the Rebels, while the Rebels must use various means to hide from the Hunter. New mechanics were added to this rerun, allowing captured Rebels to help teammates by placing various objects to confuse the Hunter. New Windward Arts have also been added for both Hunters and Rebels, amplifying the aggressive hide-and-seek experience.

The Misty Dungeon: Realm of Sand is a rerun of the much-loved combat event, where you can complete seven trials with different Ley Line Disorders. You'll be given a number of trial characters that you can select to help you in battle. Inside each dungeon, you must complete three challenges to collect three ancient runes, which will unlock the final challenge.

The classic Ley Line Overflow event will return in Version 3.3. You can challenge Ley Line Outcrops all over Teyvat and claim double rewards for 20 Original Resin three times a day. It's an amazing opportunity to farm Mora and Hero's Wits, so don't miss out.

Check out our guide on How to sign-up for the Version 3.4 Genshin Impact beta test here on Pro Game Guides to get a sneak peek of the next major update.