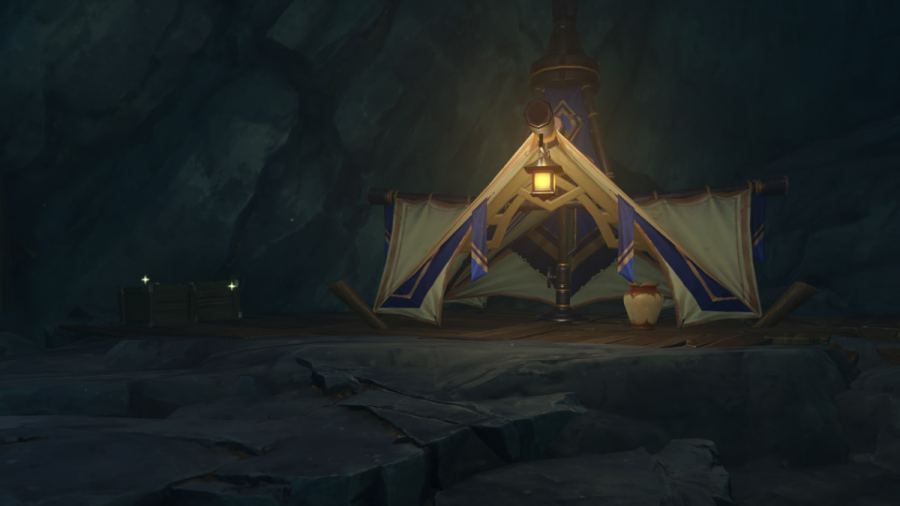 If Not Us, Then Who? is a Genshin Impact Wonders of the World Achievement that can be obtained by collecting the letters of The Fatui in The Chasm. It's tied to a Hidden Exploration Objective that involves searching for four of the Fatui Action Logs, which also give you more context on the fate of the people who were trapped in The Chasm's Underground Mines.

Before starting, make sure you have access to The Chasm: Underground Mines, which unlocks after completing the World Quest called The Chasm Spelunkers.

To get the Hidden Achievement called If Not Us, Then Who?, you need to read four Fatui Action Logs scattered around The Chasm's Underground Mines in any order. You won't get any quest items or indicators of your progress.

Head to the southern Teleport Waypoint in The Chasm: Main Mining Area. You'll immediately spot a cave that will lead you further southwest, where the arrow is pointing in the image above. Follow the path until you spot a huge clearing.

You'll spot the iconic tent used by the Fatui all over Teyvat. Approach it to find two crates to its left. Interact with the glowing spot on the leftmost crate to read the Fatui Action Log: Part I.

Head to the Teleport Waypoint northeast of the Stony Halls. You'll find a giant crater up ahead. Your goal is to glide toward the spot the arrow is pointing to in the image above, which is essentially the southwest part of the map (do not jump into the crater).

Once you're on the other side, follow the path toward the area guarded by a Pyro Abyss Mage. You may have to defeat it as you can't interact with objects when targeted by an enemy. You'll also find a ton of Oozing Concretions inside.

Head further into the room, where you'll find a crate with a glowing spot. Interact with it to read Fatui Action Log: Part II.

Related: How to complete A Company Vanishing Into the Deep World Quest in Genshin Impact

Head to the Teleport Waypoint south of the Underground Waterway, then glide toward the cracked wall the arrow is pointing to in the image above.

Follow the path forward until the shallow water connected to the waterfall is visible. You'll see that there's a hidden path under the broken pathway. Go underneath and follow the path until you reach a dead end.

You'll find a glowing spot beside some rubble. Interact with it to read the Fatui Action Log: Part III.

The last log is the easiest to find. Head to the Teleport Waypoint in The Glowing Narrows and keep going straight, toward the area marked on the map above. You'll find an abandoned Fatui camp with a glowing spot. Interact with it to read the Fatui Action Log: Part IV.

For more Fatui-related objectives in The Chasm, check out our guide on How to trigger and complete the Lost in a Foreign Land World Quest chain in Genshin Impact here on Pro Game Guides.

How to get the If Not Us, Then Who? Hidden Achievement in Genshin Impact