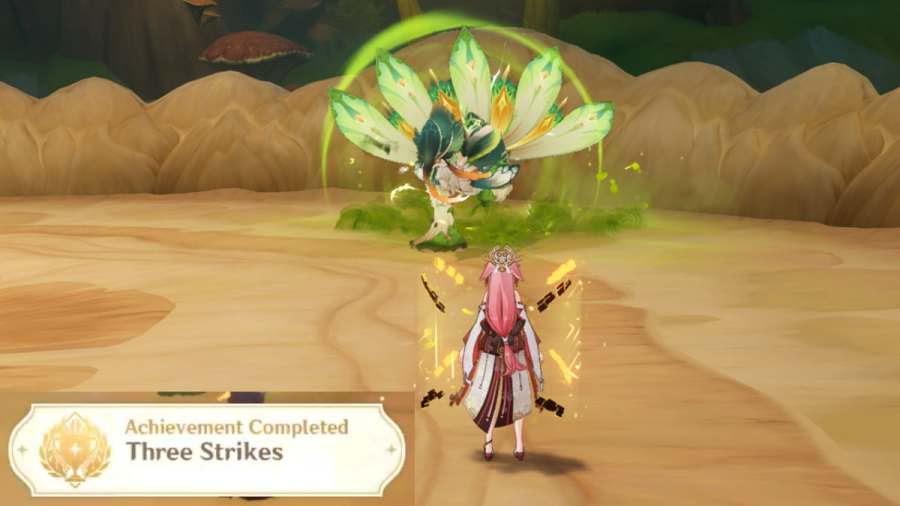 Three Strikes is a Genshin Impact Wonders of the World Achievement that can be obtained by witnessing the three powerful abilities used by the activated Jadeplume Terrorshroom.  Before attempting to get this Achievement, make sure that you have access to the Jadeplume Terrorshroom northwest of the Sumeru rainforest and have an Electro character on your team. We also recommend bringing a Dendro character to speed up this Achievement, but it's optional.

The Jadeplume Terrorshroom has a Rage meter that fills up when it comes in contact with Electro. Once it's filled up, the boss will unleash one of three powerful attacks, and then fall to the ground. Your goal is to witness all three powerful attacks, which means that you need to fill up the Rage meter a minimum of three times. The Achievement progress saves across battles, so you don't need to complete this in one round.

Related: How to get The Smell of Grilled Mushrooms in the Morning Sumeru Achievement in Genshin Impact

Start by filling up the Rage meter, which you can track under the boss' HP bar. We recommend applying both Dendro and Electro to trigger Quicken/Aggravate, which will make the meter fill up faster. Once the Rage meter has filled up, the Jadeplume Terrorshroom will release one of three powerful attacks.

From left to right:

After releasing one of these attacks, the boss will give up and fall to the ground. Once it stands up, you can fill up the Rage meter again and hope to experience a different powerful attack. What you witness is completely random, but after witnessing all three (not necessarily in a single battle), you'll unlock the Three Strikes Hidden Achievement.

Check out our guide on How to get the Nanomachines, Son! Sumeru Hidden Achievement in Genshin Impact here on Pro Game Guides to unlock another Jadeplume Terrorshroom Achievement.