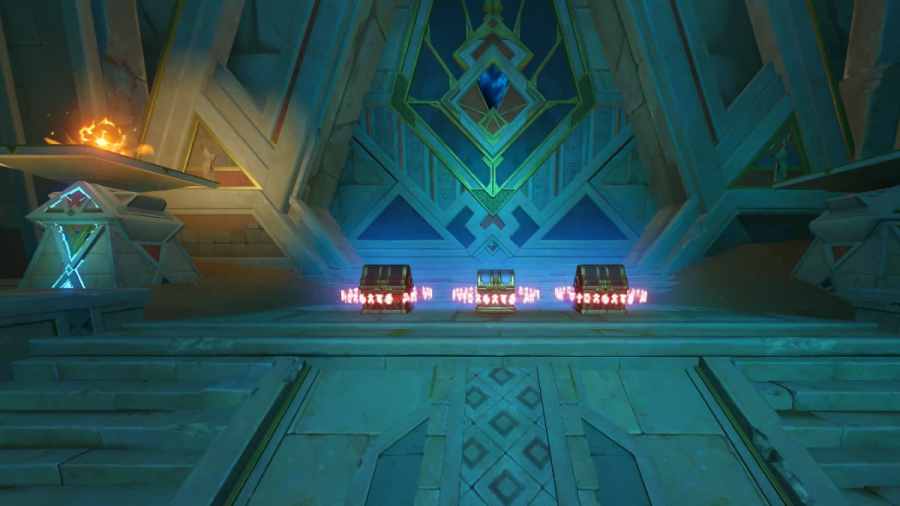 Sekhem Hall is located in the depths of The Mausoleum of King Deshret, housing a plethora of puzzles that you can solve to get amazing rewards. After draining the water in the ruin, you'll find two locked Precious Chests and one locked Luxurious Chest, all of which can be claimed after lighting up the nearby Primal Torches.

Before starting, make sure that you've obtained full clearance by completing the Dual Evidence World Quest. Doing so will also unlock Sekhem Hall.

Head to the Teleport Waypoint southeast of The Mausoleum of King Deshret to get transported to Sekhem Hall. You'll immediately spot a device with a Primal Ember. If it's empty, then you might have already done this part while doing the Dual Evidence World Quest, so you can skip to the next segment. If you haven't already, release the Primal Ember and keep following it until it descends toward another device.

Related: Key of Khaj-Nisut – How to get, Ascension, stats, and who can use it in Genshin Impact

Assuming you're facing the locked Chests, turn back toward the other side of the room, where you'll find a Time Trial Challenge. Initiate it to begin collecting 23 particles in 240 seconds. After collecting the particles on the ground, interact with the Control Unit to turn on the Large Fan Blade. It will summon a sand current to help you collect the particles going upward.

Once you've collected the first nine particles along the way, glide toward the devices and move each Cell until the Primal Beams are connected to the Anemo Monuments. This will summon a wind current. Hook to the Four-Leaf Sigil, then ride the wind current to collect particles and a Dendroculus. Keep collecting the particles along the path by gliding forward mid-air, and downward to the bottom of the room, where you started.

You should have collected all particles at this point. You'll be rewarded with a Common Chest for your effort, and the Primal Ember will unlock.

Before releasing the Primal Ember, you must first turn off the Large Fan Blade using the Control Unit so that it doesn't blow away the Ember. Once that's done, release the Primal Ember and follow it toward another device, then release it again to light up the Primal Torch and complete the puzzle. The two Precious Chests and one Luxurious Chest will unlock for you to loot, and the gate behind them will also open up, creating a direct exit path toward the desert.

For more puzzle walkthroughs, check out our guide on How to use Lost Energy Blocks in Genshin Impact – In the Name of Anfortas.