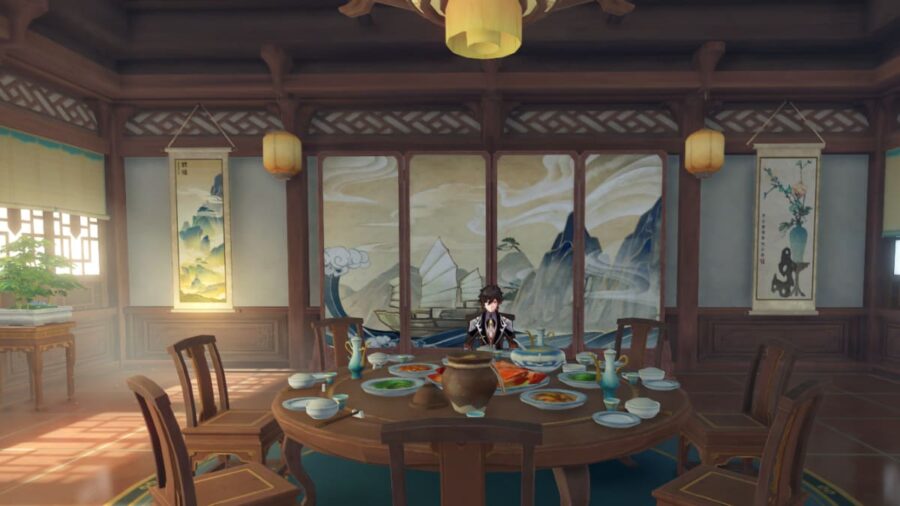 If you're tired of farming for Artifacts, take a breather and go on a cooking spree! Genshin Impact has a ton of food, and with each new area and character release, the game makes sure that local and character specialties are released in conjunction.

But before you can bring out your inner chef, you first need to learn how to make dishes with Recipes, which can be obtained through various means: quests, Reputation rewards, Domains, Chests, or purchasing from shops. Here's a list of all shops that sell Recipes in Teyvat.

Head over to Sara in the Good Hunter near the stairs facing Monstadt's main entrance. She sells some of Monstadt's favorite Recipes:

Located near the Adventurer's Guild in Liyue Harbor, the Wanmin Restaurant has been serving up legendary Liyue cuisine for years.

In the middle of Liyue Harbor, across Mingxing Jewelry, you'll find an upscale restaurant called the Xinyue Kiosk. The waitress, Yueshu, sells the following Recipes:

A little west of the Xinyue Kiosk lives a restaurant called the Liuli Pavilion. The waitress, Licai, sells the following Recipes:

The Bubu Pharmacy is located north of Liyue and is a one-stop shop for all things herbal and medicinal. Herbalist Gui sells the Recipe for the Lotus Seed and Bird Egg Soup.

The boss of the Wangshu Inn, Verr Goldet, sells the following Recipes:

Ms. Bai is a Miller from Qingce Village and is located between the large waterwheel and Granny Ruoxin's home. She sells the following Recipes:

Shimura's is a small restaurant located across the Adventurer's Guild in Inazuma. The owner, Shimura Kanbei, sells the following Recipes:

The Kiminami Restaurant is located across the Amenoma Smithy in Hanamizaka, Inazuma City. It's owned by Kiminami Anna, who sells the following Recipes:

Ryouko is a Street Food Vendor based in Ritou. Her stall is located in the southern part of the island, near the port. She sells the Recipe for the Dry-Braised Salted Fish.

Check out our guide on How to eat food without opening the Inventory in Genshin Impact to conveniently eat dishes in battle.

Where to buy Recipes in Genshin Impact