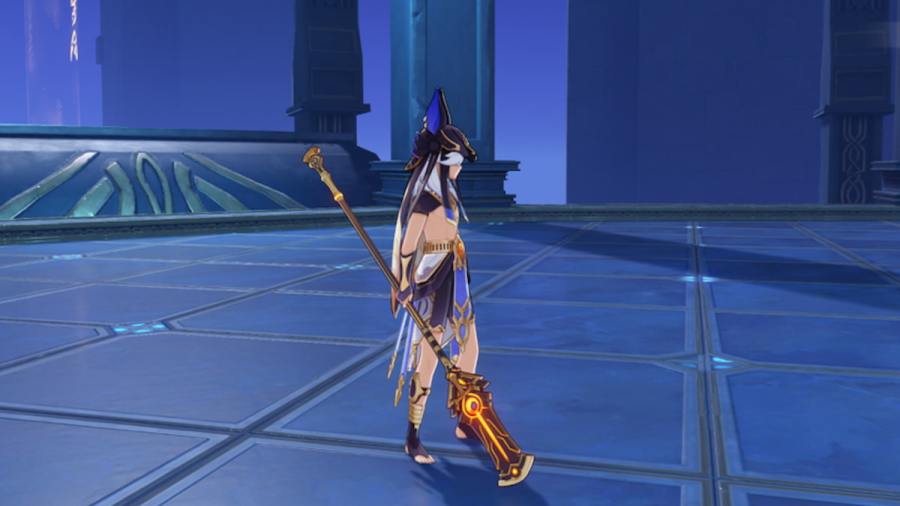 The Weapon Banner can be a harsh mistress at times. When weapons like these are up for grabs, it can be difficult to decide which one to prioritize with your precious Primogems. Fortunately, we've got you covered. Here's what we think is the better weapon between Elegy for the End and Staff of the Scarlet Sands in Genshin Impact.

Elegy for the End vs. Staff of the Scarlet Sands

The best weapon to use your Primogems on is... neither! Yes really. The reality is that both weapons are amazing additions to your arsenals, but the better one depends on what your account needs. You see, Elegy for the End and Staff of the Scarlet Sands serve different roles, thus, they have different variables to consider when deciding on one.

Elegy for the End

Elegy is an incredible bow that many bow users can utilize to great effect. However, it is not suitable for characters that prioritize being the main damage dealer in your party. Its secondary stat, Energy Recharge, is typically not ideal for the main DPS role. It is best suited for characters that can attack with their Elemental Skill and Burst off-field. Elegy's special ability, The Parting Refrain, is a buff that triggers off the wielder's Elemental and Burst skills, which makes it perfect for characters like Yelan or Fichsl. It is not recommended to use Elegy for the End on characters like Yoimiya and Ganyu due to the Energy Recharge secondary stat and their reliance on Normal and Charge attacks to deal their main forms of damage.

Staff of the Scarlet Sands

On the other hand, Staff of the Scarlet Sands is an incredible polearm perfect for the main damage dealer. Right off the bat, its Crit Rate secondary stat makes it viable on every polearm user with any kind of focus on dealing damage, even as a sub-DPS. To sweeten the deal, its special ability, Heat Haze at Horizon's End, provides huge gains to the wielder's ATK stat based on the amount of Elemental Mastery they have. This ability is so strong that ATK's value is reduced in the overall recommended stat spread for a DPS that utilizes damaging reactions due to the amount of ATK added from Elemental Mastery.

But really, which weapon is better?

As mentioned, the best weapon for you depends on whether you're looking for a support/sub-DPS bow or a DPS-focused polearm. The two roles are rather different on a proper team. But, if we had to pick which weapon has more bang for your buck, Staff of the Scarlet Sands is the winner in this close race. Elegy for the End's buff is amazing, but it has strict limitations on its usage. It has a 20-second cooldown once its buff is activated, it requires a conscious rotation due to its auto-accumulation of Sigils every time an Elemental Skill or Burst is used, and it can only be efficiently used on sub-DPS and support bow users.

On the other hand, the Staff of the Scarlet Stands is massively universal. Practically every polearm user can utilize this weapon, even if it isn't their best in the slot. It has no complicated requirements to use its special ability either. Simply stack Elemental Mastery, and you'll gain its effect. It is a fantastic stat stick that will be usable on future DPS polearm characters.

Which is better, Elegy for the End or Staff of the Scarlet Sands in Genshin Impact?